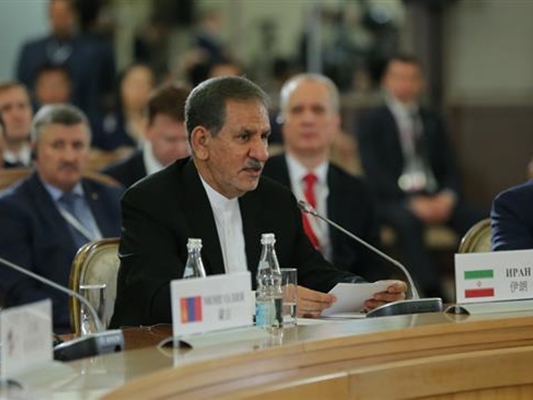 “The Islamic Republic of Iran is ready to improve its cooperation with member states of the Shanghai Cooperation Organization to play a more active role in promoting regional and international peace, stability, security and development,” Jahangiri said in an address to a SCO meeting in the Russian city of Sochi on Friday.

He also expressed Iran’s readiness to help promote the SCO status in line with the country’s goal to establish a world free of violence and extremism and make more serious efforts to help the organization thwart new threats and challenges in political, economic and cultural sectors.

He said Daesh Takfiri terrorists suffered a heavy defeat in Syria and Iraq thanks to resistance of regional nations and cooperation among Tehran, Damascus, Baghdad and Moscow.

However, Jahangiri warned of the terrorist group’s possible plot to change its geopolitical goal and drag the crisis into other regions, particularly Central Asia and the Caucasus, and stressed the importance of remaining vigilant in the face of such threats.

The Iranian vice president urged the SCO to make use of the member states’ capacities to draw up new initiatives to promote the welfare and security of regional nations.

He said cultural, political and economic measures are needed to fight terrorism and violence and added that eliminating poverty and injustice and reaching sustainable development are the main purposes of the campaign against terrorism and extremism.

Jahangiri called for identifying and destroying the financial and spiritual sources of extremist and Takfiri ideologies.

He pointed to positive cooperation between Iran and Russia to help solve the Syrian crisis and fight terrorism and extremism in the Middle East and said it can be used by the SCO as a valuable experience.

Iran and Russia have been assisting the Syrian military in its counter-terrorism operations. The Iranian military advisory support and Russian aerial backup have proved instrumental in Syria’s efforts to recapture militant-held areas and end the Daesh terror group’s territorial rule in the country.