“Enemies Seeking to Cause Rift between Iranian People, Establishment” 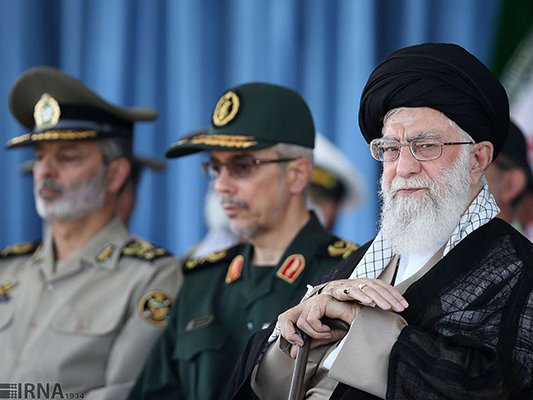 The Leader of Iran’s Islamic Revolution Ayatollah Seyyed Ali Khamenei says the enemies, including the US and certain disgraced regional states, seek to drive a wedge between the nation and the Islamic Establishment and spark riots by exerting economic pressure.

Ayatollah Khamenei made the comment while addressing cadets of the Islamic Revolution Guards Corps (IRGC) at their graduation ceremony.

“They put this economic pressure to separate the nation from the Establishment, but we will strengthen our bonds with the nation and preserve our enemy-crushing solidarity,” he said.

Ayatollah Khamenei further touched upon Iran’s national might, saying the United States’ animosity towards Iranians has increased as the Iranian nation’s hatred of the US has increased as well.

“The most obvious reason for the Iranian nation’s might is that one of the world’s most brutal and merciless powers, i.e. the US, has spared no effort over the past forty years to counter the Iranian nation, but has not been able to do a damn thing,” said the Leader.

In addition to the “foreign enemy,” he said, the “local enemy” has also been making plots over the past years.

Ayatollah Khamenei noted that another reason which proves Iran’s national might is the creation of regional coalitions by the United States in order to counter the Islamic Establishment of Iran.

“If the US were able to achieve its objective alone, it wouldn’t have needed to create coalitions with the reactionary and notorious regional countries,” Ayatollah Khamenei noted.

The Leader then expressed dismay at some suggestions which indicate submission to the enemy.

“Submission will be much costlier than resistance, and resistance will have hundreds of times more achievements than capitulation,” he noted.