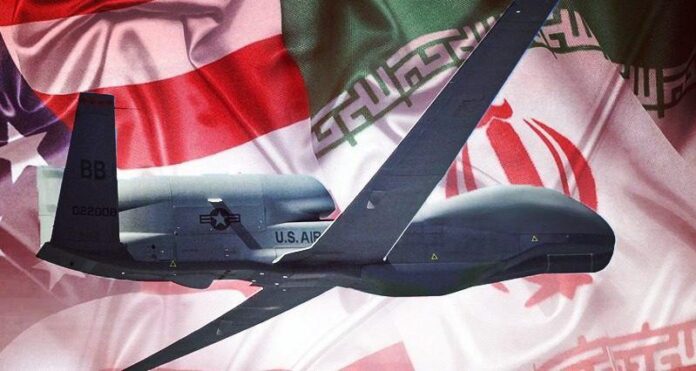 Yakup Aslan, the only representative of a private Turkish television in Iran, has written in an article that “Iran has proven it can answer a direct military threat, even from a global power like the US.”

“The same can be said for the UK, whose international immunity provided by world authorities was unable to prevent its oil tanker from being detained by Iran, again showcasing the Islamic Republic’s determination and ability to take effective defensive action,” he adds.

What follows is the full text of his article published on the United World website:

Iranian media reported that the “Global Hawk” drone was destroyed after it crossed into Iranian airspace near the Koh Mobarak region in the south. Sources say the spy drone can fly 8200 nautical miles at an altitude of 16 kilometres in a single flight.

The report published by the US Navy Central Command regarding the incident said the surveillance plane was shot down by an Iranian Land-to-Air missile in international waters near the Strait of Hormuz. Both sides accuse one another of acting without provocation.

The IRGC claims that the drone took off from an American airbase in the Persian Gulf around midnight in violation of air traffic rules, and then flew to Chabahar in stealth mode through the Strait of Hormuz. According to the report, at around 04.05 am, the plane invaded Iranian airspace and was shot down by IRGC’s anti-air defences.

The downing of the advanced American drone showed the world the power of Iran’s military and its defence capabilities. The Iranian Army has continued to gain combat experience and self-sustainability despite the Western embargo of the country’s military industries. According to Fars news agency, Iran’s military development is best indicated by its missile systems.

The American drone was destroyed by the “Sevvom Khordad” missile defence system, which was designed and built in Iran. It was developed in 2014 and has been improved with radars that can detect up to 4 targets at once. The system can also target cruise missiles, fighter jets and bombardment planes at a range of 50 km and 25 km altitude. The system is now being upgraded to reach 200 km range.

With this move, Tehran sent a clear message to the White House: any invasions of Iran’s sovereignty will be answered, and any American attack will be met with resistance.

With the US in a state of confusion and horror as a result of its UAV being shot down, President Trump said that Iran had made a “huge mistake” and that the whole world would be watching what happens next. Trump then seemed to backtrack on his hostile rhetoric, indicating that the drone may have been destroyed by “mistake,” and claiming to have called off a counter-attack at the last minute in favour of negotiation

Whatever Trump claims his reasons were for not retaliating, he was, in reality, unable to do so because of Iran’s military power and missile arsenal. For its part, Iran has been rather transparent and released its intelligence reports on the relevant incidents to the international media.

Worried about the possibility of yet another devastating and expensive war in the middle east, President Trump has been forced to accept the situation in partial-silence… nonetheless, tensions remain high, and what will happen next is still unclear. One thing that is certain, however, is that Iran struck a heavy blow, and has forced Washington to second guess its aggressive posturing.

Us Tries to Save Face with Fake Victories

Washington was unable to offer any real military resistance to Iran after it shot down the UAV, so it attempted to negotiate a pretend victory. Sources suggest that the US sent a message to Tehran via Qatar demanding that the Islamic Republic help them maintain their prestige by selecting two targets to be ‘shot down’ by the USA. Tehran reportedly refused to comply with this spectacle and responded that any aggressive action by the US would be answered in turn.

The Trump administration was forced to turn to their only weapon, political and economic sanctions, all while demanding unconditional negotiations. The US Treasury Department also added Iranian Foreign Minister Javad Zarif to the sanctions list.

After an Iranian tanker carrying oil to Syria was seized by the UK in the Strait of Gibraltar, Iran answered by detaining a British oil tanker in the Persian Gulf. These tit-for-tat actions have come to characterize the political tension in the Persian Gulf. There has been some indication that the seizure of the Iranian tanker by the British was actually planned by the US, in particular by Trump’s National Security Advisor John Bolton. The UK’s actions have led to what some are calling “the largest political crisis” since the Second Imperialist Partition War. With the crisis reaching its climax just after Prime Minister Theresa May’s resignation, and given the country’s about-face on the JCPOA, these recent actions have led many to believe the UK is essentially serving as a puppet to advance US interests.

The UK and the US governments have called the seizure of Iran’s tanker “legal and legitimized” whereas the Iranian response is labelled “illegal and illegitimate.” As faulting Iran for every geopolitical problem has become the order of the day, “international law” seems to now be showing its true face.

Holding Iran’s tanker is obviously an effort to exert pressure, but, more importantly, Foreign minister Jeremy Hunt’s statement indicated that there is also a larger program in play. Hunt stated that Iran’s actions amounted to “state piracy” and suggested that a European “naval security force” be assembled. He also indicated that this force could include the US Navy and other nations in the Persian Gulf.

After Theresa May resigned from her post, the UK’s former Foreign Minister, Boris Johnson took her place. Trump was quick to congratulate the new prime minister, a politician likely to follow his lead when it comes to foreign policy issues.

Johnson and Trump are alike in many ways, but perhaps most prominently in their love of Israel and Zionism. Johnson previously worked in a Kibbutz in Israel, the first British Prime Minister to do so. During a visit to Israel in 2015, Johnson said that “the stupidest thing to do on earth, is to boycott Israel.”

Iranian Prime Minister Mohammad Mosaddegh was the first Iranian politician to attempt to take back Iran’s oil supply from the British, who had been controlling it since the 19th century. While Mosaddegh’s effort was prevented by a coup staged by the US and UK, the British have since lost their monopoly on Iranian oil. Over time, the British lost their position as imperial overlord of the Middle East, ending up a glorified lackey of the US. As imperialist pressure on Iran increases, the UK seems once again ready to resume that role.

Nonetheless, London seemed caught off guard by Tehran’s swift and decisive retaliation, and quickly sent negotiators to try to strike a deal. Ayatollah Mohammad Mohammadi Golpayegani, head of Iranian Supreme Leader Ayatollah Khamenei’s office, noted that “the country that once appointed ministers and MP’s in Iran has come to a point where they are sending negotiators to ask us to free their oil tanker.”

Who Is the Real Puppet?

Unable to any serious damage to Iran, the US and the UK are turning to Israel. The Prime Minister of Israel Benjamin Netanyahu threatened Iran during a recent visit to an Israeli air base stocked with western supplied F-35 fighter jets: “Iran needs to remember that these planes can reach targets anywhere in the Middle East, including Iran and Syria.”