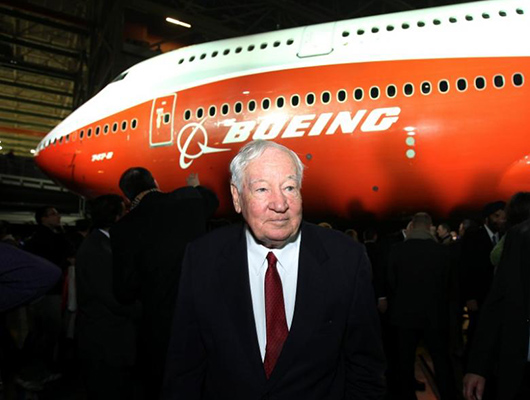 Joe Sutter, the father of Boeing 747 plane, died today, August 31, at the age of 95. Earlier in January 2015, he had written a letter to the Iran Air officials, which is now published by Mizan news agency.

In this letter, Sutter thanks Iran for ‘taking good care’ of the plane he developed a long time ago, and praises the country’s capabilities and beauty, which he experienced during his stay in Tehran.

I cannot tell you how pleased I was to find out that Iran Air is still having great success in flying your 747SP and that you still have great pride in the airplane, as I still carry around a tremendous amount of pride in having led the development of an airplane that has lasted so long and has meant so much to so many. I and my team designed the first Boeing 747 to be a revolutionary aviation pioneer that would connect the world as the first wide body jumbo jet, and it was soon after named the “Queen of the Skies”. Since then it has gone through several iterations, including the fantastic 747SP that Iran Air still flies today, and the most current form of the 747-8, the Intercontinental, which is truly a marvel as well with its new wings, new engines, longer body and greater energy efficiencies.

I remember well my time with Iran Air back in the day when I and my team were working with General Hademi and the Iran Air team to get the new Iran Air 747SP off to a strong start. I was heavily involved with the initial contacts into Iran Air, and was part of the team that convinced your airline that the 747SP was the perfect fit for Iran Air, given the airplane’s particular capacity that would help Iran Air run its European and Transatlantic service and really establish Iran Air in the international air travel arena. I worked closely with your engineers, pilots and management, and I will always remember the relationships that I formed there. I still even remember the house that I stayed in during my visits to your gorgeous city, Tehran. You have such a beautiful country, full of fantastic history and with gracious people that became my good friends in working what I still remember as a big, cooperative Boeing/Iran Air effort.

I wish that I could have been on your November 23rd, 2014 special flight over Iran of the last operative 747SP in the world. I would have had great time with the German passengers that were on that flight. I would think that the German passengers on that flight would be most excited to fly on a 747SP since their own airline, Lufthansa, was the launch customer for the new 747-8 Intercontinental and have been enjoying much success with it.

Iran Air is still very special to me and my history with the 747. I congratulate you on your momentous flight and I thank you for taking such good care of my airplane over the years. 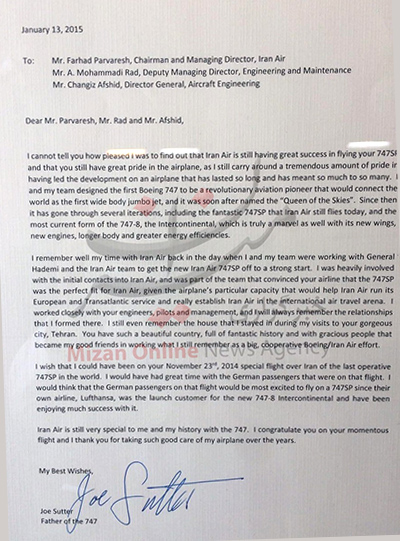