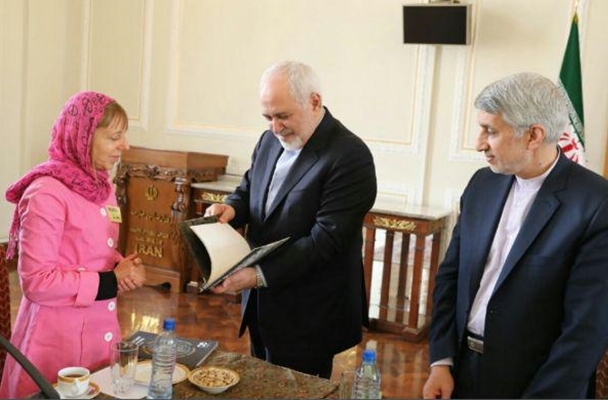 Iranian Foreign Minister Mohammad Javad Zarif on Sunday held talks with a group of peace-seeking and anti-war activists, known as CODEPINK, in Tehran.

During the friendly meeting, FM Zarif elaborated on the concepts of “independence” as a clear principle of Iran’s foreign policy and the country’s “endogenous security” which is based on its people.

He also outlined the Islamic Republic’s stances and views regarding the most important regional and international issues, the issue of human rights, and that of Palestine.

Zarif also responded to the questions raised by the participants.

Code Pink: Women for Peace (often stylized as CODEPINK) is an internationally active NGO that describes itself as a “grassroots peace and social justice movement working to end US-funded wars and occupations, to challenge militarism globally and to redirect our resources into healthcare, education, green jobs and other life-affirming activities.”

In addition to its focus on anti-war issues, it has taken action on issues such as drones (including protests, trips to meet with drone victims in Pakistan and Yemen, bringing them to the US), Guantanamo Bay prison (including a delegation that included former prisoners and yearly protests at the White House), Palestinian statehood (including its involvement in the BDS movement to protest Ahava, SodaStream, ReMax, and AirBnB), the Iran nuclear deal, Saudi Arabia (including protests to end US alliance with Saudi Arabia, its airstrikes on Yemen, and its executions of its political dissidents), and Women Cross DMZ.

The organization characterizes itself as women-initiated. It has regional offices in Los Angeles, California and Washington, D.C., and many more chapters in the US as well as several in other countries.

With members wearing the group’s signature pink colour, Code Pink has conducted marches, protests, and high-visibility actions in order to promote its goals. Although women initiated and lead the group, Code Pink encourages people of all genders to participate in its activities.