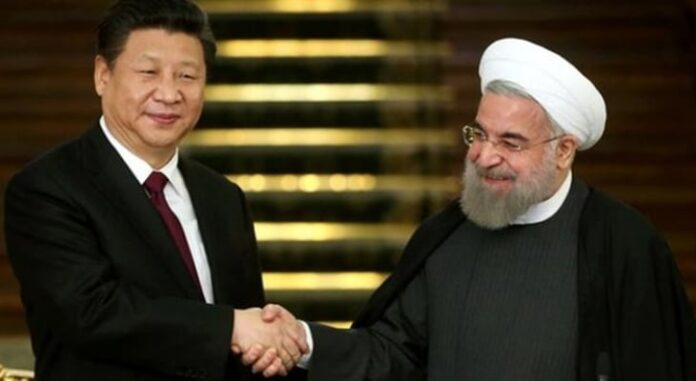 Iran’s non-oil trade with the East Asian country totaled $22.28 billion in the last Iranian year (ended March 20), indicating an increase of 16.82% compared to the year before, IRICA reported.

Iran imported 4.80 million tons of Chinese goods worth $13.21 billion during the period under review, registering a rise of 7.92% and 22.91% in tonnage and value respectively YOY.

Iran mainly imported auto parts and rail parts, as well as LCD and LED display modules and parts from China.

China has pumped billions of dollars in Iranian projects since nuclear sanctions against the country were lifted in 2015, giving its firms an advantage over European firms still struggling to find banks to fund their plans.

For instance, it has been involved in Iranian rail projects, reflecting its Belt and Road initiative that aims to improve global transport and trade connectivity.

China National Machinery Industry Corp, known as Sinomach, has signed a contract to build a 5.35 billion yuan (£603.5 million) railroad in western Iran, adding to a wave of Chinese investment in the country, Reuters reported on March 21.

Sinomach will handle the engineering, procurement and construction work for the 410-km (255 mile) railroad connecting the Iranian cities of Tehran, Hamedan and Sanandaj, the company said on its website on Monday.

Earlier, two rail-related contracts were signed in Tehran on March 7.

A contract was signed between Iran’s Construction and Development of Transportation Infrastructures Company and Sinoconst China Machinery Industry Construction Group INC for the construction of Section-1 of the 446-km-long Shiraz-Bushehr Railroad that covers 250 km of the whole route.

“This was an engineering, procurement, construction and finance contract worth CNY5 billion (close to $790 million). Jahanpars Group is the Iranian contractor of the project,” Deputy for Construction and Expansion of Railroads, Ports and Airports of the Construction and Development of Transportation Infrastructures Company affiliated to the Ministry of Roads and Urban Development, Jabbar-Ali Zakeri, told Financial Tribune.

Another contract was signed on Wednesday between the Industrial Development and Renovation Organization of Iran and CRRC Nanjing Puzhen Co., a Chinese railroad rolling stock manufacturer, for the design, procurement, supply, manufacture and delivery of 450 subway wagons for the Iranian cities of Ahvaz, Shiraz and Tabriz.

“The project is worth €500 million and will be financed by the Chinese side. The contract was signed by Naqi Manafi, IDRO’s manager for financial and economic affairs, and Wang Tao, general manager of Puzhen,” said Ali Araqchi, IDRO’s director for international affairs, who negotiated the contract.

The project will take 55 months to complete.

In July 2017, China signed a contract with Iran to finance the electrification of a 926-km railroad from Tehran to the eastern city of Mashhad in Khorasan Razavi Province with a $1.5 billion loan. A letter of credit for that purpose was opened five months later.

Tehran-Mashhad Railroad is a strand of the so-called ‘New Silk Road’–a 3,200-kilometer railroad project that ultimately sees Urumqi, the capital of China’s western Xinjiang Province, linked to the Iranian capital Tehran, connecting Kazakhstan, Kyrgyzstan, Uzbekistan and Turkmenistan along the way.

From Tehran, the grand project will join Iran’s east-west network leading to Turkey and East Europe. It could also open a way to Europe via a developing rail route from southern Iranian ports to Azerbaijan and Europe.

The electrification of Tehran-Mashhad Railroad will take four years.