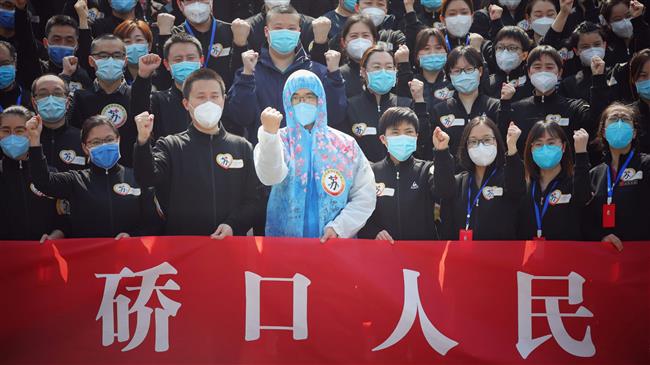 China has for the first time reported no new locally transmitted cases of the new coronavirus at its epicenter since the country started recording infections in January.

China’s National Health Commission announced on Thursday that there had been no new infections in the country’s central city of Wuhan, in Hubei Province, which is the epicenter of the coronavirus outbreak in China.

The commission, however, said the number of cases imported from abroad had surged by a record 34, mainly from Spain and Britain.

The number of new deaths from the pathogen across the vast Asian country was down to single digits, with just eight reported, bringing the total death toll to 3,245.

Data released by the commission also showed that 23 new suspected cases had been reported, with the total number of infections standing at 80,928. A total of 70,420 patients have recovered.

The coronavirus, which causes a respiratory disease called COVID-19, first emerged in Wuhan late last year. It has been practically contained in China but is spreading rapidly around the globe.

South Korea on Thursday reported a jump in new coronavirus cases, reversing days of a lowering pace in new infections, after a new outbreak emerged in a nursing home in the hardest-hit city of Daegu, southeast of Seoul.

The Korea Centers for Disease Control and Prevention (KCDC) said there had been a total 152 new confirmed cases, taking the national tally to 8,565. Ninety seven of the new cases were from Daegu, including 74 patients at a nursing home.

As part of measures to stem the pandemic, South Korean authorities have begun to tighten border controls for all arrivals from overseas, with incoming passengers undergoing body temperature checks and completing health surveys on arrival at the Incheon International Airport.

Italy, the worst-hit by the coronavirus in Europe, on Wednesday reported nearly 500 new deaths from the contagion, the highest one-day official toll of any country throughout the world since the first case was detected in China.

Head of the Italian Civil Protection Service Angelo Borrelli announced 475 new deaths from the new coronavirus, bringing the total number of fatalities in the country to 2,978, more than half of all the cases recorded outside China.

The country of 60 million has so far recorded 34.2 percent of all the deaths officially attributed to the coronavirus across the globe.

The European Union has been ramping up its efforts to coordinate the fight against the virus across all its 27 member states as the World Health Organization (WHO) warned on Friday that Europe was now the “epicenter” of the global coronavirus pandemic and was reporting more daily cases than China did at the height of its outbreak.

Meanwhile, Australian Prime Minister Scott Morrison announced on Thursday that his country was closing its borders to foreigners as part of efforts to contain the coronavirus pandemic.

With the majority of the cases coming from overseas, Morrison said all non-residents would be barred from entering the country from 9 p.m. local time (1000 GMT) on Friday.

Australia has recorded around 600 coronavirus infections and six deaths.

The Australian premier also warned people to “stop hoarding,” as shoppers across the country emptied supermarket shelves amid rising panic over the rapid spread of the pathogen.

Videos showed people storming grocery stores and fighting over foodstuffs and other essentials such as toilet paper.

“Stop it. It’s not sensible, it’s not helpful and I’ve got to say, it’s been one of the most disappointing things I’ve seen in Australian behavior in response to this crisis. That is not who we are as a people,” Morrison said.

Some large supermarkets in the major Australian cities of Melbourne, Brisbane, Perth, and Sydney have sold out fruits, vegetables, meat, and rice as fears of a lengthy epidemic rise in the country.

WHO calls coronavirus ‘enemy against humanity’

In a related development on Wednesday, the head of the World Health Organization (WHO) called the deadly virus an “enemy against humanity” as the number of infections from the pandemic soared past 200,000 across the world.

The COVID-19 has claimed more than 8,000 lives globally since the virus first emerged in China in December last year.

“This coronavirus is presenting us with an unprecedented threat,” Tedros Adhanom Ghebreyesus told journalists in a virtual news conference, stressing the need for world countries to “come together as one against a common enemy: an enemy against humanity.”

Tedros called on the international community to adopt physical distancing measures, including canceling sporting events, concerts and other large gatherings, to slow down transmissions.

The WHO chief underlined that the only way for countries to suppress and control the coronavirus pandemic was to “isolate, test, treat, and trace.”

Tedros also called on all countries to implement “comprehensive strategies” to slow down the virus transmission and flattening the pandemic’s curve.

Moreover, Russian health officials announced on Thursday the first fatality in the country as a result of infection from the now-global pandemic.

The patient — an elderly woman hospitalized in Moscow — had been diagnosed with several other conditions, including diabetes and heart problems.

The health department said in a statement that the 79-year-old died of pneumonia while being treated in an intensive care unit.

Russia has reported 147 cases of the novel coronavirus, according to official figures.

Russian President Vladimir Putin said this week that the coronavirus situation is “generally under control” in the country, and the government has promised to step up testing.