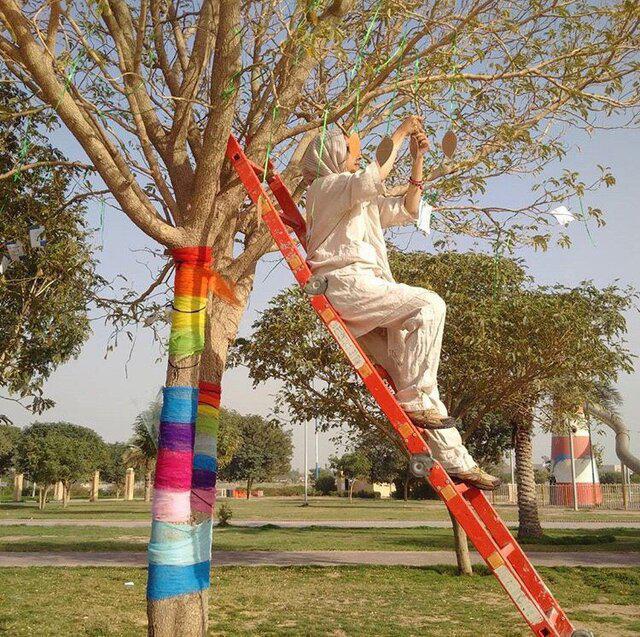 An Iranian charity worker has dedicated her life to children with cancer to change the colour of their world.

Hoda Rashidi is a 37-year-old woman from the city of Ahvaz in the south of Iran. She has so far managed to help the dreams of 453 cancer kids come true!

Hoda started her charity work in 2001. “I was 19 when I started a charity to take care of orphans. At that institute, I became the painting instructor of children and a new horizon opened for me,” she said.

“It was hard for me to get in touch with the kids at the beginning. These kids hate being pitied. I remember that on the seventh session of work at that charity they brought a boy from Abadan. Her parents had been killed in the accident and there was no one to take care of him. The boy was crying a lot, and when he entered the classroom, everyone was impressed. While crying, he put his head on my lap and fell asleep.”

“Suddenly, two of the kids in the class, who by chance had a good relationship with me, came up and punched me and said in panic that ‘you are not our mother’ [they were mad at me for showing kindness to that child]. It was one of the hardest days of my life,” ISNA quoted her as saying.

“From that day on, I decided to be strong and change the way I interact with kids. I told the kids you have no difference with other children. I told them you only live in a multipurpose institution, and that doesn’t mean you are weaker than kids out,” she noted.

The days of teaching at the institute continued with new experiences.

“I had a charity drawing class for seniors in 2011, and after a few sessions I realised that these people only use black and brown in their paintings. After talking to the centre’s manager, I realized they had not been out for a long time. I decided to do something for these people. In collaboration with a band that was not officially registered anywhere, we organised two festivals: “Walking Festival for Over 50 People” and “Ahvazi Grandparents”. Because of not having a license, we faced some problems, but I finally could get a charity (cultural and artistic) institute license.”

We wanted to have an institution where we could create hope for people, she underlined, adding that “Once, on World Wind Day, we held a wonderful program at one of the city’s squares. At the suggestion of a friend, we wanted to create a wind park in the city (Ahvaz Shafa Hospital) and needed money that was raised with the help of charity workers. However, we found that creating a wind park is forbidden. So we created a hospital playroom to work on treating children with cancer.”

“One day, I went to the hospital and saw a cardboard tree mounted on the wall and small pieces of paper hanging from the tree. I saw that some wishes had been written and painted on the papers. The room had one official who I called “Aunt of Wishes” the same day. I asked her what is going on, and she told me the kids were just painting their dreams. I was saddened by this answer and objected that they are creating hopes for kids out of nothing,” she continued.

This was the beginning of a new horizon for Hoda Rashidi.

Bashir was the first cancer kid who Hoda decided to help his wish come true.

“I decided to do it myself. The first dream I came across was the dream of a 6-year-old boy named Bashir who he had only one week to live. He wished to be a police officer to see his city clean and beautiful. We put on uniforms and cleaned a large street in the centre of city with the help of salespersons and brought Bashir with the latest model car and spread a red carpet. When Bashir got out of the car, he saw his city clean, while at the same time two thousand people cheered and shouted, “We love you Bashir!” I have to tell you that Bashir, who had only a week to live, is 18 years old now. He has defeated cancer and is in love.”

Hoda says she has helped the wishes of 453 cancer kids come true.

“Parand was an 8-year-old girl born in Andimeshk who is now hospitalised in Ahwaz. She wished that one day she would wear a pink bridal dress. We fulfilled her wish a few days ago. She was a cute girl and was constantly texting the hospital’s psychologist as to what kind of nail polish or crown she likes for her event,” said Hoda.

However, there are also wishes that Hoda Rashidi could never help come true because time was up and the kid died.

All in all, Hoda Rashidi is pleased with the choice she has made for her life so far. “I feel well talking to you now and I’m the luckiest person on earth,” she concluded.