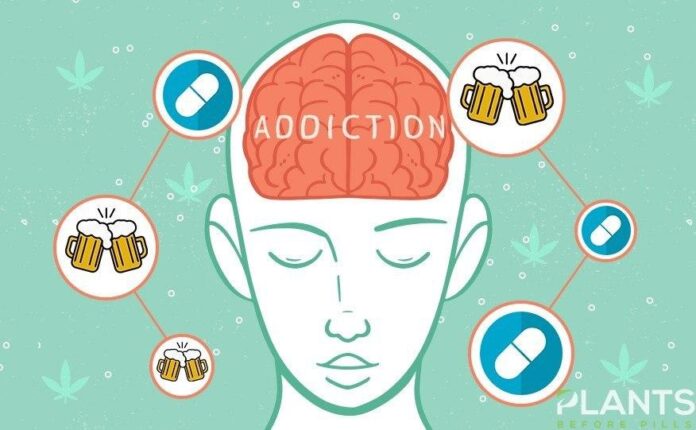 Can CBD be used to treat Cannabis Use Disorder? The results of a recent controlled double-blind study suggest that CBD may, indeed, help in the cessation of problematic marijuana usage.

Addicted to cannabis? Maybe cannabis can help. Wait, what? While the THC in marijuana can be hard to give up if you’ve been using it daily for some time, a recent study has shown that CBD from hemp might help to reduce cravings and withdrawals.

But is marijuana even addictive? Some experts say yes, it is, while others scoff at the notion. Although THC itself has not been shown to create a physical dependence in the same way as drugs like heroin and cocaine, the truth is that the pleasant feelings of euphoria caused by smoking, vaping, or eating marijuana can certainly be habit forming — especially in stressful times.

The fact of the matter is that nearly half (47 percent) of those who use marijuana on a daily basis, now legal and for sale at dispensaries nationwide in the United States, will show significant signs of withdrawal such as cravings, irritability, anxiety, and depression when they quit cold turkey. And about 1 in 10 of those who partake in cannabis consumption actually show signs of becoming physically reliant upon the drug.

This condition is known as Cannabis Use Disorder and it’s becoming more and more prevalent. In fact, marijuana is now the number one substance cited by first time clients at rehab centers in Europe and has increased by 76 percent in the past decade.

This increase is in direct correlation to the increasingly higher concentrations of THC over the past couple decades. There is also substantial evidence showing a five-times higher increase in the risk of psychosis with daily usage of highly potent cannabis.

At present there are no proven treatments for dependence on marijuana. However, the results of a recent study suggest that prescription-strength CBD could prove to be an effective remedy for the symptoms of marijuana withdrawal.

THC and CBD, the yin and yang of cannabis

The two most abundant cannabinoid compounds produced in the resinous flower clusters of the cannabis plant are THC and CBD. While THC (delta-9 tetrahydrocannabinol) is infamous for its intoxicating effects, CBD (cannabidiol), on the other hand, is non-intoxicating. And while many strains of marijuana are high in THC, hemp is essentially devoid of THC and higher in CBD.

It has been shown that CBD has the ability to mimic an endocannabinoid produced naturally by our own bodies called anandamide. Anandamide is responsible for the production and uptake of a hormone called serotonin. And serotonin has been shown to increase feelings of comfort. Patients suffering from anxiety and depression are often shown to have low levels of serotonin.

Because of its ability to reduce withdrawal symptoms, CBD is now part of the regimen at a number of alcohol and drug addiction treatment centers.

And now it’s looking like CBD may just be the silver bullet needed to help those suffering from withdrawal from marijuana.

A team of scientists has discovered that prescription-grade CBD seems to significantly reduce intake of marijuana in those who use the drug on a regular basis.

But what is meant by “prescription-grade CBD”? While commercially available CBD products typically fall in the 5 to 50 milligram range, prescription CBD may typically be as much as 16 times more potent.

In a report published by Inverse, study lead author Dr. Tom Freeman, Director of the Addiction and Mental Health Group within the Department of Psychology at the University of Bath explained:

“There are currently no safe and effective treatments available for prescription to help people with cannabis use problems. This is a large and unmet clinical need and could help people to quit in an acceptable treatment format. Whilst it may seem counterintuitive to treat problematic cannabis use with CBD – a constituent part of the cannabis plant – THC and CBD have contrasting effects on our own endogenous cannabinoid system. Unlike THC, CBD does not produce intoxicating or rewarding effects and it shows potential for treating several other medical disorders”

A study on CBD for treating Cannabis Use Disorder

The study involved 82 individuals diagnosed with marijuana use disorder to determine the efficacy and safety of prescription CBD products. Most of the individuals in the study were considered to have a moderate to severe marijuana addiction.

The findings of the study were published recently in the journal Lancet Psychiatry.

Scientists in the study measured the effects of prescription-strength CBD on levels of cannabis use both during a four-week treatment period and after a six-month follow-up.

Participants exhibited four out of 11 possible symptoms including continued abuse of cannabis in spite of ongoing social and interpersonal issues caused by the detrimental effects, and an inordinate amount of time spent in pursuit of obtaining, using and recovering from the effects.

“Most people who use cannabis do so without significant problems,” Dr. Freeman explained. “Others find that it has a substantial negative impact on their life such as their ability to work, relationships with friends and family, and their mental and physical health.”

The participants in the study acknowledged their marijuana habit was creating problems in their day to day existence and expressed a desire to quit within a month. Many had made futile attempts to quit on their own.

The members of the study were randomly placed in groups and were given two capsules of prescription grade CBD twice a day for four weeks — either 200mg, 400mg, or 800mg. There were also participants who received a placebo.

In addition to the capsules, the participants received six counseling sessions to aid in their cessation of cannabis, both before and after the study.

The researchers determined the 200mg dose was ineffective and dropped it from the experiment. In phase two of the study, evidence showed 400 to 800mg was more effective than the placebo.

Each week the study participants were asked about the number of days they abstained from marijuana consumption and urine tests were given to determine cannabis usage.

Those who received daily CBD doses of 400mg to 800mg greatly reduced their cannabis intake and appeared to abstain for longer periods than those participants who were given the placebo. The group receiving 400mg abstained half a day more per week. Those administered 800mg abstained 0.3 days a week. While those numbers aren’t high, they are statistically significant.

No adverse reactions were reported throughout the study when CBD was consumed.

“Our findings indicate that CBD doses ranging from 400 mg to 800mg daily have the potential to reduce cannabis use in clinical settings, but higher doses are unlikely to bring any additional benefit. Larger studies are needed to determine the magnitude of the benefits of daily CBD for reducing cannabis use. CBD has contrasting and often opposite effects to THC on our endogenous cannabinoid systems. In this way, CBD is very different from a nicotine patch or other replacement therapies.”

“The results from our trial open up a novel therapeutic strategy for managing problematic cannabis use in clinical settings. As we highlight, CBD at daily oral doses of 400mg and 800mg has potential to address the substantial and currently unmet clinical need for a pharmacological treatment of cannabis use disorders. Whilst it may seem counterintuitive to treat problematic cannabis use with CBD—a constituent part of the cannabis plant—THC and CBD have contrasting effects on our own endogenous cannabinoid system. Unlike THC, CBD does not produce intoxicating or rewarding effects and it shows potential for treating several other medical disorders.”

If the studies in this field continue to confirm the findings, an estimated 22 million people suffering from cannabis use disorder may find that CBD can help.

It’s important to point out that the study authors are not advocating for people to self-medicate with CBD in order to curtail their marijuana usage.