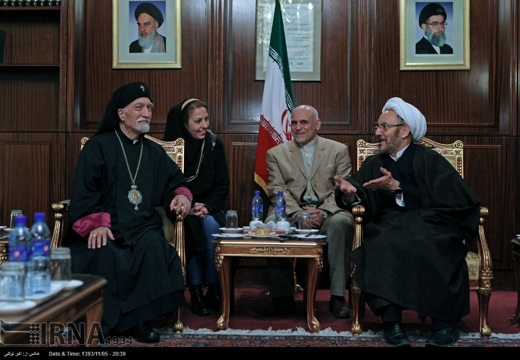 Expressing gratitude to Pope Francis for his firm position on abusive cartoons in the French magazine, Younesi said the move was not only an insult to Islam but to all divine prophets.

Ali Younesi, a special assistant to the president for ethnic and religious minorities, said Iran’s religious and cultural teachings stress respect for all divine religions, adding that the Islamic Republic is committed to supporting the rights of all religious minorities.

In a meeting with the Archbishop of the Armenian Church Nerses Bedros XIX in Tehran on Sunday, Younesi said Iranian Armenians are part of the old history of the country and all Iranian ethnic groups have lived together peacefully throughout history.

He thanked the Pope Francis for his firm position on the abusive cartoons in the French magazine, saying it was not only an insult to Islam but to all divine prophets.

Stressing that all such sacrileges are masterminded by Zionists, Younesi said, ‘Certain sophisticated and secret activities are pushing the world toward atheism and insecurity. While the Middle East needs security, the Zionists are creating insecurity, hatred, and enmity in different ways.’

Referring to President Rouhani’s proposal at the United Nations to make a world without extremism and violence, he said the Islamic Republic is fighting against terrorist groups.

The Archbishop of the Armenian Church, for his part, expressed pleasure over his trip to Iran and meeting with high-ranking officials and minority members of parliament, saying it is obvious that the minorities in Iran are living in peace and have no problem thanks to government efforts to uphold their rights.

Referring to the insulting cartoon in the French magazine, the archbishop said freedom of speech does not let anyone insult other religions.