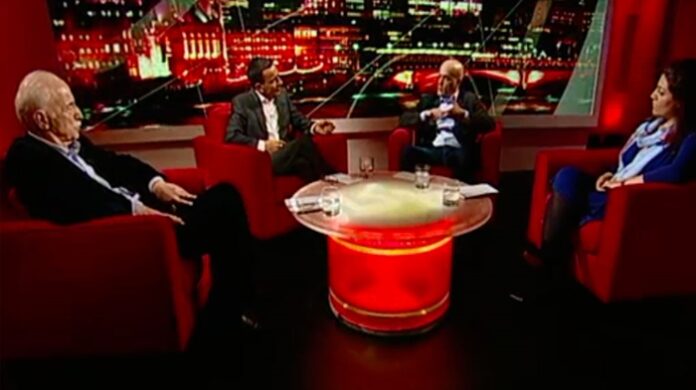 In a recently-aired program, the Persian-language news channel of BBC (British Broadcasting Corporation) simply discounted millions of job losses and economic damages caused by sanctions in Iran, and described as immoral the boycott of Israeli products that may cause several thousands of job losses in the far, hazy future.

A TV program recently aired by BBC Persian described the international movement of Boycott, Divestment and Sanctions [BDS] as an immoral move. Here is IFP’s translation of Tabnak’s report in this regard:

The European Union (EU), under the pressure of widespread demands of its public opinion, passed new instructions for labelling the products exported from occupied territories to the EU. The move provoked different reactions; however, the most interesting one was a show on BBC Persian news channel.

The Zionists’ atrocities against Palestinians, the demolishing of their houses and targeted killings of Palestinians, reached a level that even pro-Zionist governments had to give in and accept the ban on Israeli products.

France repeatedly urged Israel to ease the conflicts, but the calls fell on deaf ears and therefore, even Paris, which used to be a staunch supporter of Zionists, gave the nod to put more pressure on Israel.

The Boycott, Divestment and Sanctions Movement [BDS Movement], started in 2005, is a global campaign attempting to increase economic and political pressure on Israel to comply with the stated goals of the movement, which is the end of Israel’s occupation and colonization of Palestinian land and the Golan Heights, full equality for Arab-Palestinian citizens of Israel, and respect for the right of return of Palestinian refugees.

Last November, the BDS movement announced plans to expand its anti-Israeli boycott. Under the boycott, goods produced by Palestinians are distinguished from Israeli ones through some labels. As a result, Europeans have the right to choose either to buy goods produced by Israelis or those of Palestinians.

In no way can we put the name of sanctions on this boycott; however, it has raised some reactions.

Recently, the news channel BBC Persian showed one of the latest reactions to the issue. In its regular TV program, Pargar [compass], the TV host Dariush Karimi made attempts to manipulate the discussion in favour of Zionists.

He opened the discussion by asking, “Is the campaign for the boycott of Israel by the supporters of Palestinian rights in Europe morally defensible? How effective can this boycott be? Is this boycott morally just while the countries arrayed against Israel are themselves at the forefront of villainy and crime? Who will be hurt the most by the boycott of Israeli companies?”

Apart from all the double-standard policies of BBC Persian – which has never talked about the Zionists’ violation of Palestinian rights, their demolishment of Palestinian houses, and the illegal settlements constructed by Tel Aviv in a daily basis – the question remains that why the news channel never touched upon the unfair sanctions against Iran.

This was the question posed by many Iranian visitors, who had posted comments under Tabnak’s report, describing BBC as “an old fox” or “deceitful liar”.

“What preys on my mind is that why BBC English or BBC Persian do not even bother to produce a program and discuss different aspects of immoral sanctions imposed on Iran, which had even banned the import of medicine into our country,” a commenter said, expressing regret over the BBC’s hypocritical behaviour and two-facedness.

People, particularly the younger generation, should make efforts to upgrade and expand the boundaries of their media knowledge and grow a sense of discernment to distinguish between right and wrong and be immune to the elegant manipulation of minds by the unfair media, Tabnak reported.