Ansarullah leader: Enemy wants to cause division among Yemenis 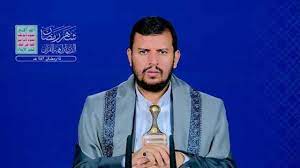 The leader of Yemen’s Ansarullah Movement says the enemy's weapon in the war against the country is to create enmity among the Yemeni people.

Abdul Malik Badruddin Al-Houthi said, “It is our duty to be united so that the country does not surrender.”

He made those comments in a speech to a delegation of tribes in Yemen’s Ma’rib Province.
Houthi added that the Saudi-led war against Yemen is widespread and the enemy in this war uses sanctions, dispersal of the nation and causing enmity among Yemenis.

“The Americans and the Israelis are the real enemies of Muslims,” he said, noting that, “They try to take advantage of the problems within the Islamic Ummah for their own purposes.”

Regarding the all-out Saudi-led siege of Yemen, he said several days ago, the Israeli president traveled to the United Arab Emirate (UAE) and Saudi Arabia opened its airspace to him, but it has banned the Yemeni people from traveling within its airspace.

Houthi added that the blockade on the Yemeni people is a crime because it has caused great suffering and torment for the people of the country.

In March, 2015, Saudi Arabia and its allies including the UAE formed a coalition and, with the help and green light of the United States, launched large-scale attacks against Yemen under the pretext of reinstating ousted and fugitive former President Abd Rabbuh al-Mansour Hadi to power.

The Saudi-led war has killed hundreds of thousands of Yemenis and reduced the country’s infrastructure to rubble. Millions of Yemeni have also been displaced.