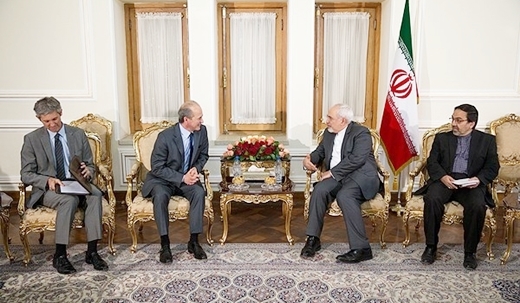 France's new Ambassador to Iran, François Sénémaud, in a May 1 meeting with Iranian Foreign Minister Mohammad Javad Zarif underlined his country's resolve to fulfill its commitments under the Joint Comprehensive Plan of Action (JCPOA), also known as the nuclear deal.

“France is determined to comply with its commitments within the JCPOA framework,” Sénémaud said, while expressing his pleasure in the JCPOA.

The new French ambassador pointed to the exchange of diplomatic visits by the two countries’ officials, and underlined the need for the further expansion of mutual cooperation.

Sénémaud expressed the hope that the two countries could boost their banking interactions based on international regulations and within the framework of the JCPOA.

The Iranian foreign minister, for his part, highlighted the recent visit of Iranian President Hassan Rouhani to France, and expressed the hope that the contracts signed during that visit would come into effect in full.

Also in late January, Zarif underlined that President Rouhani’s visit to Paris displayed the results of diplomacy, and the beginning of a new era for fruitful mutual cooperation.

“(President Rouhani’s) France visit illustrated the power of diplomacy. A new era of mutually beneficial cooperation has started in economics, politics and culture,” Zarif wrote on his Twitter account at the time.

Iran and the six world powers held several rounds of talks in Geneva, Lausanne and Vienna before striking a final agreement in Vienna on July 14 to end a 13-year-old nuclear standoff.

After the agreement, the UN Security Council unanimously endorsed a draft resolution turning into international law the JCPOA reached between Iran and the 5+1 (the US, Russia, China, Britain and France plus Germany) group of countries.