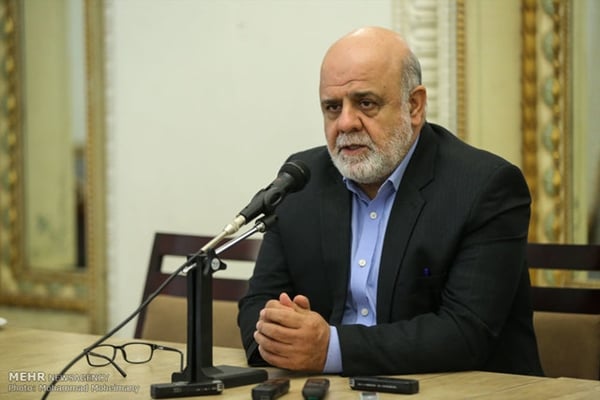 The Iranian ambassador to Baghdad says Iran has withdrawn all of its military advisors from Iraq.

Iraj Masjedi underlined that all Iranian military advisors left Iraq as soon as the defeat of ISIS was announced, meaning the terror threat was over.

“All of them (Iranian military advisors) have returned to Iran,” Masjedi was quoted by Entekhab news website as saying in an address to a host of university students and media personnel in Iraq.

“Unlike the Islamic Republic of Iran, the US is maintaining its troops in the region despite the end of ISIS [rule] and it is reinforcing its bases and military garrisons and setting up new positions in some areas,” said the diplomat.

He also touched upon the reasons behind Washington’s withdrawal from Syria.

“US forces’ pullout from Syria should be evaluated within the framework of Washington’s strategic policy in the region, which is to create instability and crisis there, and that is why it obstructs any efforts that would lead to peace and tranquility,” he said.

The Iranian diplomat noted that the Americans do not want ISIS and terrorism to be rooted out in from region, but it likes to manage terrorism in order to keep the Middle East in a state of tension and crisis.

“The United States’ military presence in Syria has been too costly and destructive for Washington,” he said.

“The foreign forces [in Syria] lack any popular base, a fact that has extremely worried Americans,” the ambassador said.

“It particularly became evident for Muslims that the United States does not care about the interests of the people in the region and views the region through the eyes of the Zionist regime [of Israel],” Masjedi added.

He said the United States’ relocation of its embassy from Tel Aviv to al-Quds and Israel’s support for ISIS shed light on the hidden objectives of Washington and Tel Aviv.

“These concerns were the reason behind the pullout of US troops from Syria, and that’s why the US ordered the withdrawal of its forces from Syria,” the Iranian ambassador noted.

He then lashed out at the US military presence in the region.

“The US military presence in the region is not justifiable because the regional countries enjoy the power to protect themselves thanks to their domestic military troops, and there is no need for foreign forces,” he said.

According to the Iranian ambassador, the Americans reserve the right to interfere in regional affairs and that is why they do not even get permission from regional countries when relocating troops and establishing bases.

He said the United States’ bullying behavior reminds one of the law of the jungle.

“The Americans talk as if the world belongs to them, and this has created hatred towards them,” he said.

Elsewhere in his remarks, Masjedi underlined that the public and media should keep criticizing Washington’s policy of interfering in regional countries’ internal affairs and pressuring countries to restrict their relations with Iran.

“Those working in the media should inform the public of realities and do not allow the Zionists to take the initiative and create divisions among nations and ethnic groups under different pretexts,” he said.

In the meeting, Iraqi media personnel thanked Iran for supporting and assisting Iraq, especially in the war against ISIS terrorists. They emphasized that the Iraqi nation appreciates Iran’s efforts to establish peace and stability in the region.

They also called for the enhancement of Tehran-Baghdad scientific and economic relations and asked Iran to share with Iraq its experience in the field of development.