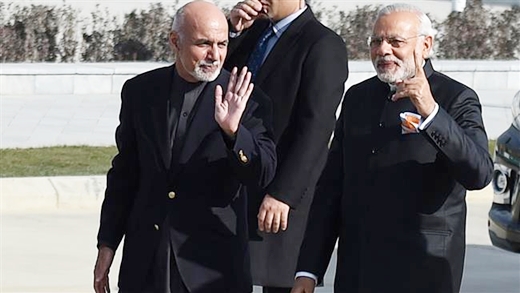 Afghan President Ashraf Ghani and Indian Prime Minister Narendra Modi are going to visit Tehran to sign a trilateral memorandum of understanding (MoU) with Iran on the development of the south-eastern Iranian port city of Chabahar.

Modi is due in Tehran on May 22-23. The Iranian Embassy in Kabul said the exact date of Ghani’s trip was yet to be determined but he will be in Tehran concurrent with Modi for inking the MoU on the Chabahar Port.

The Afghan and Indian officials are scheduled to take part in a ceremony aimed at breaking the ground for the development of the strategic port of Chabahar.

This will be Ghani’s second official visit to Iran since taking office in September 2014. He first visited Iran last April to discuss Tehran-Kabul cooperation on a wide range of issues.

Modi will be visiting Iran for the first time.

In 2003, Iran and India agreed to develop the Port of Chabahar which sits on the Gulf of Oman.

The project was, however, suspended following the imposition of sanctions against Iran over Tehran’s nuclear program.