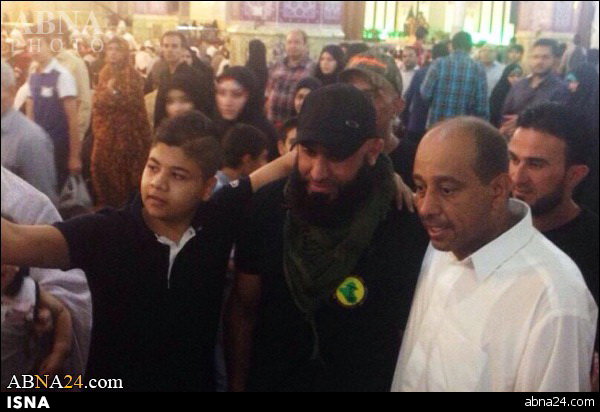 Ayyub Faleh al-Rubaie, who has turned into a nightmare for ISIL terrorist group in Iraq, has visited Imam Reza’s shrine in Mashhad.

Ayyub Faleh al-Rubaie – a university lecturer, a Taekwondo champion and the popular face of the fight against ISIL in Iraq – has paid a visit to the holy shrine of Imam Reza in Mashhad and received a warm welcome by the locals.

A commander of the Kataib al-Imam Ali, an Iraqi Shiite militia group of the Popular Mobilization Forces that is fighting ISIL in Iraq, Rubaie is known as Abu Azrael and has a long record in fighting Takfiri terrorists and has turned into a nightmare for terrorists.

He first came under the spotlight when foreign media described him as Iraq’s Rambo [or the Angel of Death], releasing photos of him with sword and ax fighting ISIL terrorists.

He taunts and mocks the extremists on social media, saying he has dispatched them in droves with an arsenal that would satisfy any video-game aficionado: a scoped rifle, hand grenades and, when things get dicey, an ax or sword.

The following are the pictures the Iranian Students’ News Agency (ISNA) released online on July 5 of the Angel of Death in the holy Shrine of the eighth Shiite Imam in northeastern Iran: