A Shirt to Help Children with Learning Difficulties 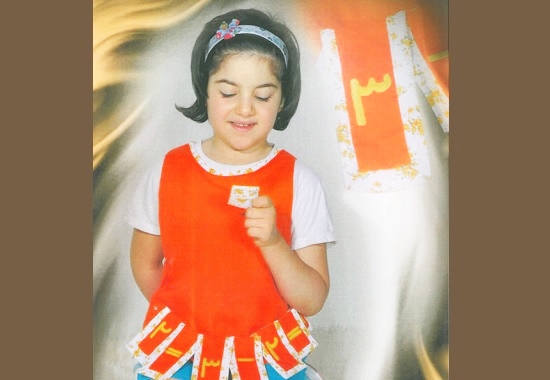 Mohadeseh Mahboubi has invented a “smart shirt” that not only entertains children, but can also help them learn.

Mohadeseh Mahboubi is a costume and clothing design postgraduate from Yazd Azad University. She has designed a “smart shirt” for children suffering from learning difficulties.

In her interview with Honar Online she talked about the initial idea for the shirt, saying, “My postgraduate thesis was on Using Educational Building Blocks in Pre-school Children’s Clothing. That idea ended up in the current form of the shirt.”

She added, “While researching my thesis, I made some changes to the initial idea and changed it into a puzzle which can teach the alphabet, numbers and colours to children. After sharing it with a child psychiatrist and getting a positive response from her, I continued studying the characteristics of those types of children, and took it to an education centre for children with learning difficulties and tested it there. After getting positive results, I registered my invention.”

She pointed out that the children who were tested were mostly in first or second grade. “Those children have difficulties sitting at their desk and learning. This shirt is more like a game for them and it’s entertaining, so it keeps them interested.”

About the function of the shirt, she said, “The training takes place in three stages. The children are asked to find the right letter for a specific word or a number and place it on the shirt. If they do it correctly, through the electric system built into the shirt, it starts playing music for them, so they get motivated.”

She continued, “During the time I was testing the shirt in that centre, I saw children who were crying and didn’t want to go into their classrooms. However, after trying the shirt they were immediately interested and would ask to try it again. They play and learn simultaneously.”

Regarding the mass production of the shirt, she said, “The professors who were involved in the process were all interested to mass-produce it. They believe that there will be a lot of demand for it. So far, however, no steps have been taken in this regard.”