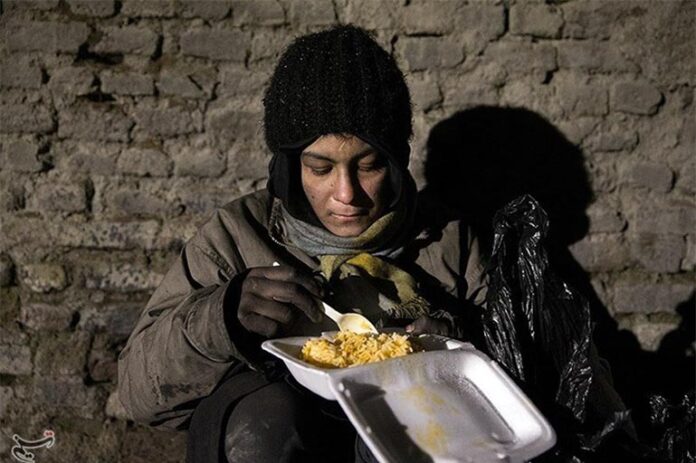 Each week, 16 homeless addicts are admitted to a rehabilitation center with the financial help of the volunteers.

The whole campaign started with a short message posted on a social networking platform. Then over 100 people expressed readiness to contribute to it. It was five months ago that a group of volunteers started collecting 5,000 portions of food from houses and restaurants across the city and giving them out along with tea and fruit every Wednesday at a park in southern Tehran to those who sleep rough.

Etemad daily has published a report on the initiative aimed at helping the rough sleepers in the capital. What appears next is the translation of part of that report:

There is a doctor, a hairstylist, a painter and a poet in the ranks of the volunteers. Whenever necessary the doctor treats them, and the barber trims their hair. Each week, 16 of the homeless addicts are admitted to a rehabilitation center with the financial help of the volunteers who have no idea what it is like to sleep rough in freezing cold or extreme heat.

The idea of putting a public fridge on a street corner to allow the homeless to get what they need occurred to them in one of their Wednesday gatherings. Earlier in October they got a permit from District 12 of Tehran Municipality and placed the refrigerator in a street in Tehran. They have plans to put a wardrobe and a bookcase next to the fridge so that the homeless can get clothes and books too.

The volunteers whose ranks include university students, housewives, engineers, managers and salesmen have decided to prove to the public that male and female rough sleepers in the grey metropolis of Tehran are not thieves. Like others they are just human beings.

They plan to encourage others to care about these individuals. Their efforts partly paid off when a restaurant owner in the poor neighborhood started to put 10 portions of Kebab with rice in the fridge or when a family placed the extra food of their party in the fridge one morning.

Rahman, a 20-year-old addict who has been sleeping rough for four years, has taken two portions of food: one for himself to eat and the other to sell to buy drugs. He said, “Last night was freezing and I am still chilled to the bone.”

He said he had not had lunch or dinner for six days before the fridge appeared in the corner. “I get the better of my hunger with drugs, when I am high, I lose my appetite and forget about food.”