A nice grandma and the story of her dolls 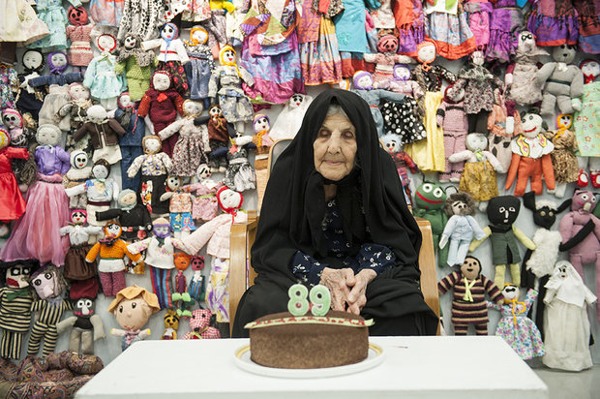 An Iranian grandma has a name and a story for every doll she makes; she has put her dolls on display at an exhibition.

Bibi Hazer, a 90-year-old grandma who lives in Shiraz, has made many dolls, with her memory brimful of untold stories which date back to the years of yore.

The wall behind her is spotted with dolls she has created in her loneliness to feel the void. The visitors take a walk around, look at Bibi and ask if she has made those dolls all by herself. In a nice Shirazi accent, Bibi says she’s done all that by herself. The visitors pose for a photo with Bibi before they leave.

Bibi Hazer and her dolls, that have been the guest of a gallery at the Iranian Artists Forum for a few days, impressed many people who were there to catch a glimpse of items of artistic value.

Earlier in October, Mehr News Agency published a report on the artistic works of the nonagenarian and a friendly chat with Bibi, who was accompanied by his grandson Bahman Abbaspour. The following is the translation of part of the report, including Bibi’s words: 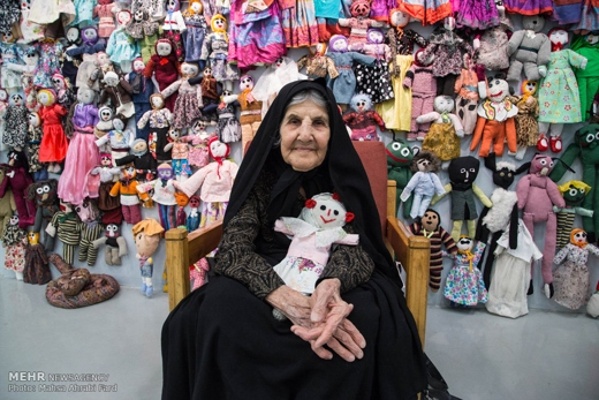 Where did it begin?

“[…] It is now almost 20 years since I first began making dolls. I learned it from my mom, grandma and great grandma. I began to make dolls when my husband died. I had nothing else to do, so I took up doll making. Gradually I got used to it and now I do it on a daily basis. […]”

What is the story of the dolls?

Bibi’s dolls have names and stories. Her grandson says, “Grandma used to tell stories when we were kids and we have good memories of them. When she saw the dolls carried around by children in the family some 20 years ago, she started to make copies of those dolls. Everybody liked her dolls. She started to make the dolls of people who lived in the past.” […]

Bibi likes her dolls very much. When asked about the one whom she likes the most, she says she likes all of them because she’s put in a lot of efforts for each. […] Some dolls have woven clothes on. She says she has done it all by herself, adding that she makes two dolls every day. Her daughter-in-law and grandchild buy her the fabric and she takes care of the rest.

A while ago, her grandson says, Bibi could not believe that anyone might like her dolls, wondering why no one would buy them. The family put the dolls on sale and people welcomed it. The family decided to halt the sale because the dolls were selling out.

There are reasons behind the decision not to sell. Bibi urges her family to keep selling, vowing she would keep making dolls as long as she is alive. But her grandson says that certain institutes have proposed to keep the dolls as part of a collection to protect them forever and let people watch them, arguing that when the dolls are sold, nobody knows what will become of them. […]

I like my dolls and wish to make more

With wrinkled hands, Bibi takes out a weaving hook and a woolen ball out of her bag and start weaving. “I don’t want to sit idly by when I am alone. I want to make dolls for as long as I can. I cannot do the house chores, but I make dolls for the love of it. […]

Bibi has made dolls of TV characters

Bibi is a regular TV viewer. You can see the traces of TV programs in her dolls. She has made two dolls of Bob Ross, the famous painter and host of Joy of Painting, a TV show. […]

Her grandson says Bibi constantly watches TV and when Catherine Ashton was replaced by Federica Mogherini during nuclear talks between Iran and P5+1, Bibi said that the lady is not Ashton and she has been replaced.

Bib’s stories, a source of inspiration

[…] Her grandson says that he has memories of the stories Bibi told when he was a child. Bibi has four sons and one daughter. Her grandson, Bahman Abbaspour, has a degree in acting and is now a stage actor. He has helped the family hold an exhibition of Bibi’s dolls.