​Shell Deal with Iran Seen as Message to US 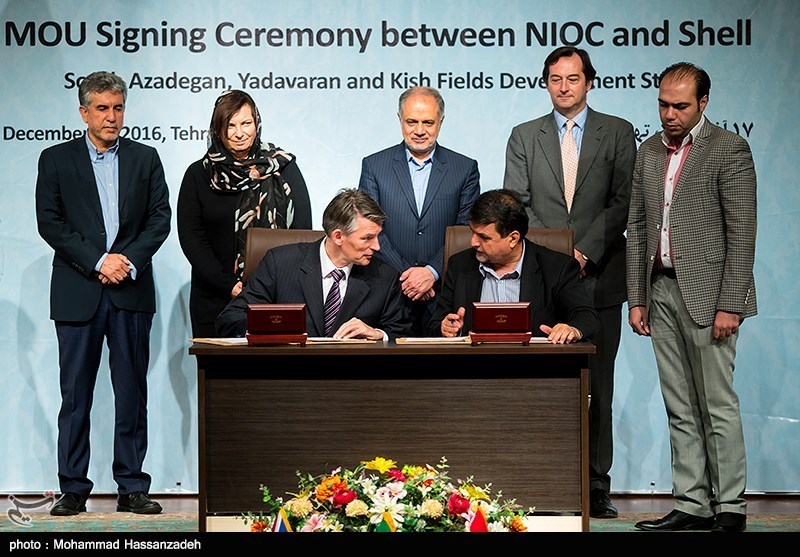 Iran on Wednesday awarded a basic agreement to global energy giant Royal Dutch Shell to study three mega oil and gas projects – an agreement that was hailed in Tehran for not only its technical and economic benefits for Iran but also the political message that it sent to the world and specifically the United States.

Under a Memorandum of Understanding (MoU) that was signed between Shell and the National Iranian Oil Company (NIOC), the Dutch/British company was tasked with studying the development of South Azadegan and Yadavaran oil fields as well as Kish gas field.

Shell could accordingly win separate deals over the development of the fields upon NIOC’s approval of the results of its studies and once it succeeds in subsequent project negotiations.

South Azadegan was discovered in 2001 and was described at the time as the world’s biggest oil find in decades.  It has recoverable reserves of about 2 billion barrels.  Located in a former theater of Iran-Iraq war (1980-88), South Azadegan is believed to be connected with Iraq’s supergiant Majnoon oil field which has recoverable reserves of 13 billion barrels which was also being developed by Shell and is now producing 200,000 barrels per day (bpd) of oil for Iraq.

Yadavaran – which was once described as the crown jewel of Iran’s oil projects – has recoverable reserves of 3 billion barrels.

South Azadegan and Yadavaran are located in Iran’s southwestern oil-rich province of Khouzestan and already have an early production of 40,000 bpd and 85,000 bpd, respectively.  Both are expected to boost Iran’s oil production capacity by above 600,000 bpd significantly once fully developed within the next three years.

Kish gas field is located in the Persian Gulf island of Kish and is considered as the country’s second biggest gas field after South Pars.  With a reservoir of 70 trillion cubic feet, Iran plans to use Kish output to feed a pipeline to Oman where a section of the supplies will be turned into liquefied natural gas (LNG) for exports to international markets.

Hans Nijkamp, the head of the department for Iran affairs at Royal Dutch Shell, told reporters that the NIOC over South Azadegan, Yadavaran and Kish projects marked a new chapter in relations between Shell and Iran.

Nijkamp also praised what he described as “Iran’s exceptional performance” to keep its oil sector afloat in face of multiple years of sanctions.

The global oil market was eager to see Iran’s return, he emphasized, adding that Iran’s progress specifically over the production of natural gas is praiseworthy.

Nijkamp further said Shell was determined to enter into a long-term cooperation with Iran, stressing that this could have significant positive impacts for both sides.

The MoU that the NIOC signed with Shell came on the hills of several similar agreements signed with other international energy giants including Total, Schlumberger and DNO. The surge in awards of energy deals to companies is already seen in Tehran as a result of the success of President Hassan Rouhani to lift sanctions against Iran through the implementation of a nuclear agreement with the so-called P5+1 – the five permanent members of the Security Council plus Germany.

Iran’s Persian-language newspaper Taadol hailed the MoU with Shell as what could safeguard the Iran-P5+1 nuclear agreement – the Joint Comprehensive Plan of Action (JCPOA).  This was a reference to concerns that US President-elect Donald Trump would materialize his campaign threats against the JCPOA.

Other newspapers viewed the MoU with Shell as a response by Britain to a recent move by US lawmakers to extend Iran Sanctions Act by another 10 years – what has already drawn the anger of the Islamic Republic as a violation of the JCPOA.

If the Europeans were to be deterred by US anti-Iran moves like the sanctions act or Trump threats, they would not have come forward to sign contracts, the media quoted NIOC chief Ali Kardor as saying.

Another Persian-language newspaper Iran highlighted the remarks by Britain’s ambassador to Iran Nicholas Hopton that London and its European allies still acknowledged the JCPOA.  Hopton emphasized that Britain would strongly support the JCPOA as well the expansion of trade relations with Iran.  He added that he had attended the ceremony to sign the MoU between the NIOC and Shell to indicate London’s support for the expansion of relations with Tehran and also send a message to the Netherlands – another major shareholder of Shell – to support trade relations with Tehran.