Zarif Warns US against Any ‘Miscalculation’ in Persian Gulf 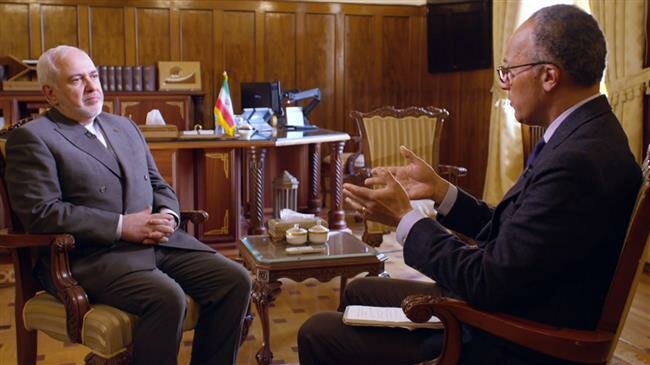 Foreign Minister Mohammad Javad Zarif cautions the United States against attempting to form a naval coalition against Iran under the guise of ensuring maritime security in the Persian Gulf.

Zarif made the remarks to NBC News’ Lester Holt on August 17 in an interview in Tehran, whose complete footage was published by the network on Tuesday.

“If countries from outside this region want to come to this region to disturb our security, to create military alliances against Iran, to create coalitions expecting Iran not to benefit from the fact that it is the coastal state here, then they are making a very serious miscalculation,” he said.

The United States has announced plans to form the coalition to supposedly protect shipping in the Strait of Hormuz following a series of mysterious attacks on oil tankers in the strait and the Sea of Oman.

Washington has accused Iran of having a hand in those attacks, a claim Tehran has strongly rejected. Tehran has warned that such sabotage operations may be part of a general ploy to target Iran amid increasing regional tensions.

The US has asked its allies to join the coalition, a call which has not been warmly received over fears that such a mission could lead to tensions with Iran.

Asked “What is Iran’s breaking point?” under the US’s ongoing pressure, Zarif asserted, “Iran will never break.” He cited the country’s record in defeating several aggressors, noting, “We have taught good lessons to those who have invaded us.”

The top diplomat said Iran has been part of the region for 7,000 years, adding, “It is the United States that is uninvited” here.

“I do not think that the United States or any other foreign military presence in this region has ever brought security for anybody,” he stated.

“It is a tiny body of water, which is extremely overcrowded, and the last time that we had such a crowd of naval vessels in this region, we had the downing of a civilian airliner,” Zarif said in reference to a 1988 incident when a US missile cruiser shot a Dubai-headed Iranian passenger plane killing all the 290 people on board, including 66 children.

Zarif also blamed the emergence of the Takfiri Daesh terror group on Washington’s interventionist actions in the region.

The foreign minister also expressed alarm that some were actively trying to trap US President Donald Trump into a situation, where he “would not have any option” other than escalation.

It is the US and its allied states, which have been the source of the region’s troubles, Zarif said, commenting on Washington’s accusation that Tehran backs regional “malign activity.”

“If you look at our region…who’s the source of instability? Who has supported terrorism? Who supported [former Iraqi dictator] Saddam Hussein, when he invaded Iran? Who supported the Taliban, when they took over in Afghanistan in the 1990s?” he asked.

“Who imprisoned the prime minister of another country, [that is] Lebanon?” Zarif said, referring to Saudi Arabia’s detention of Sa’ad Hariri in 2017.

“Who is bombing Yemen? Who are fighting between themselves in southern Yemen, in Aden? Who is fighting in Libya? Who is fighting in Sudan? Who supported ISIS (Daesh) in Syria?” Zarif asked, still referring to Saudi Arabia, the United Arab Emirates, and their regional proxies.

“The answer to all these questions would not be Iran. The answer would be US allies,” he stated.

The Iranian foreign minister further said, “Today, you would have malign actors like Daesh ruling over a lot of territories” had it not been for Tehran’s support for groups like Hezbollah— which have been fighting Takfiri terrorism across the region, but are accused by Washington of “malign” activity.

Zarif also rejected any “linkage” between Iran’s detention of a UK-flagged tanker in the Strait of Hormuz in late July, and Britain’s seizure of an Iranian-operated supertanker in Gibraltar earlier last month.

British forces captured the now-freed vessel on July 4, with London alleging that it was carrying crude to Syria in violation of the European Union’s unilateral sanctions on the Arab country. This is while the British vessel was seized by Iranian forces after it collided with an Iranian fishing boat and ignored its recurrent distress calls.

Zarif repeated Iran’s assertion that the Iranian-run ship was not destined for Syria.

However, he said, “We don’t recognize any restrictions, and we will continue to do our trade with anybody we like.”