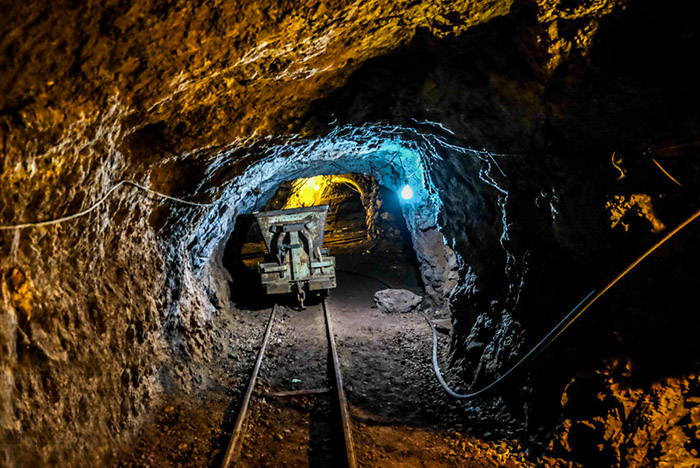 “The people of this village make huge money by extracting turquoise.” This is what many people in Nishapur say about the residents of Ma’dan village, who have leased the turquoise mine from the government for a 25-year period, and are extracting the precious stone themselves.

For at least 2,000 years, Iran, previously known as Persia in the West, has remained an important source of the semiprecious stone turquoise, which was initially named “Pirouzeh,” meaning “victory” by Iranians with Arabs later terming it “Firouzeh”. In Iranian architecture, blue turquoise was used to cover the domes of Iranian palaces because its intense colour was a symbol of heaven on earth.

This deposit, which is naturally blue, and turns green when heated due to dehydration, is restricted to a mine-riddled region in Nishapur, which lies within an hour of Mashhad, the capital of Khorasan Province.

Here’s IFP’s translation of a report by ISNA on a village near Nishapur, whose residents extract the gem themselves:

The road from the northeastern city of Nishapur to Ma’dan village is very smooth and flat. They say the road is kept in a good condition because of the turquoise mine; many businessmen commute to and from this village each month to purchase the processed stone they need. Many of them work with particular sellers in the village. 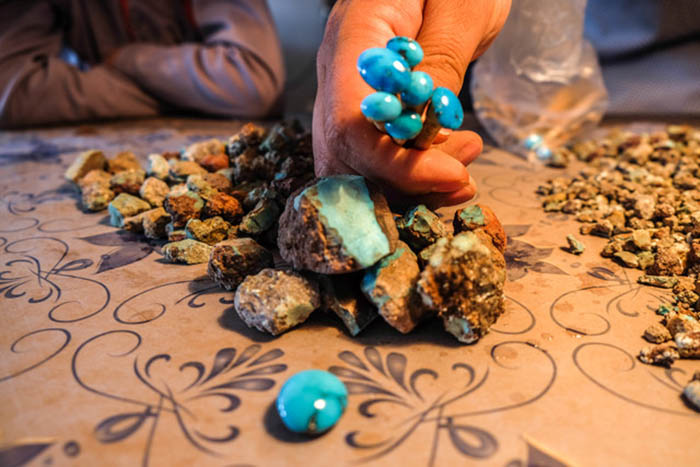 342 families are now making a living out of the mine’s turquoise.

Once every couple of years, an auction is also held selling the stones, and many queue up in this village to buy unprocessed ore. However, a lion’s share of the processed turquoise is produced by the people of this village, who buy from the auctions then process and sell their share of the stones.

It is said that people have been extracting turquoise from Nishapur’s mine, located near the Lower and Upper Ma’dan villages, for 2,000 years. Some 15 years ago, the government leased out the right to extract the semiprecious stone to a cooperative formed by the villagers. It is said that under the government’s management, the mine was not at all profitable, and was even running at a loss. But now, 342 families are making a living out of the mine’s turquoise. 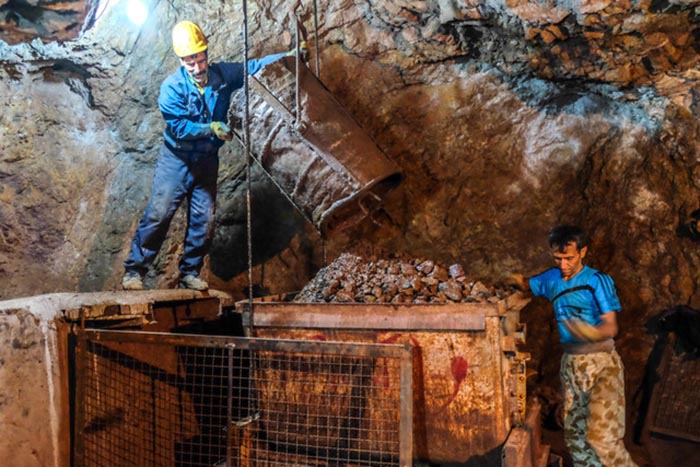 The mine is estimated to have 9,000 tons of turquoise, but only 19 tons can be extracted in a year. From every ton of ore, 8 to 10kg of turquoise is extracted, and the price varies based on the quality and colour. 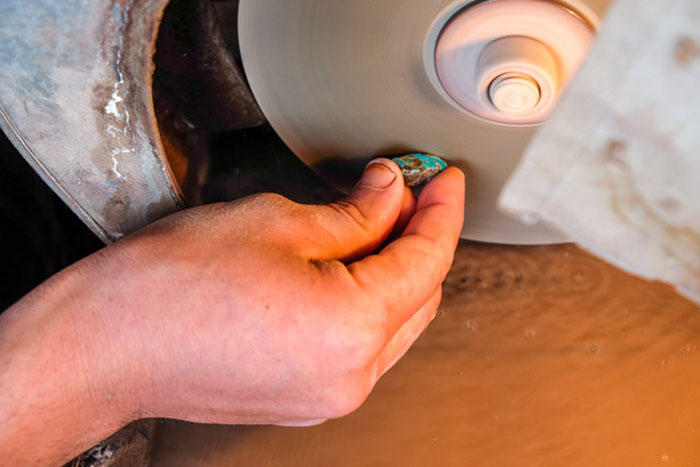 Villagers: God has hidden every single person’s livelihood in a particular place in order for him/her to find; our livelihood lies in the stone.

A long time ago, Iranians used to extract turquoise from openings in the mountain, but now that extraction has been a regular job for many years, the mines for extracting the stone have penetrated into the heart of the mountain to depths of 80 metres.

The highest-quality turquoise should be extracted from a place where stone and water are mixed with each other. Many years ago, miners used to break the stone layers using sledgehammers; but now, dynamite has replaced them.

As a result of dynamite explosions, there is a pile of broken stones, and harmful smoke and residue hangs in the air. 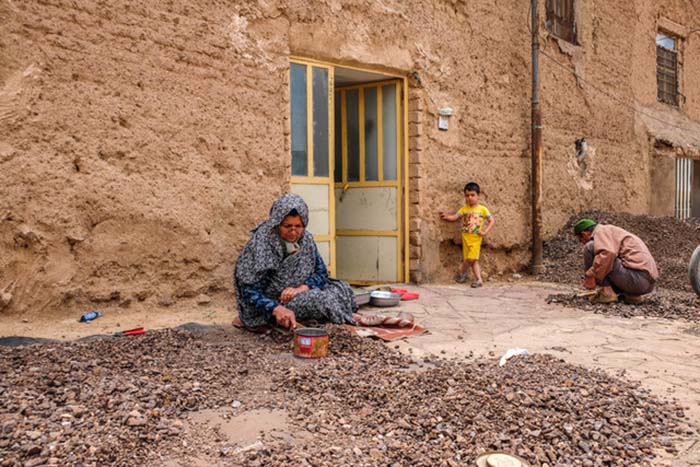 They pile up the turquoise in the mine warehouse for the monthly auctions, and take the rest to their village for processing the stone. This is the job of women, children, and of course retired male miners, who look at the stones one by one, break some of them using hammers, and retrieve a huge amount of turquoise from the worthless ore.

The mine has 165 workers. Some of them are supervising engineers, but people say that “in mines, experience is more helpful than science”. 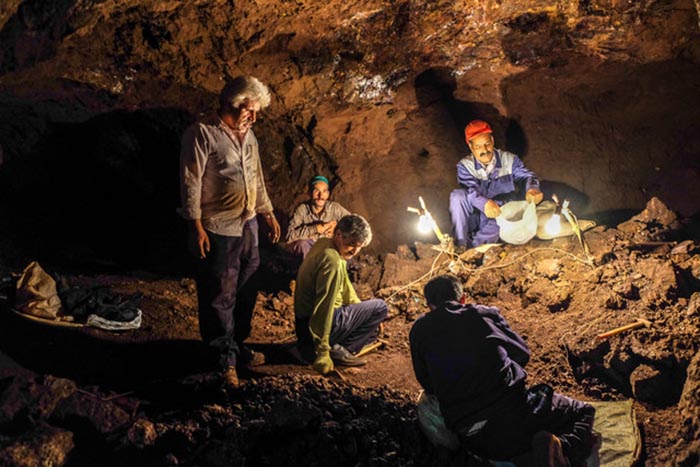 The oldest mine worker has 60 to 70 years of experience in mining. He does not like to talk to strangers, but all miners, even the geological engineers in the mine, introduce him as the best, the one who knows how to find the best turquoise. Sadeqi, one of the chief mine workers, says, “During the years since we villagers took over the mine’s responsibility, no one has been injured at all. We fully observe the safety regulations, and the guys are careful.”

Right beside the mine’s exit, there is a small medical centre for unexpected incidents. The workers, however, say that it has never been needed and used.

People have been extracting turquoise from the Nishapur mine for 2,000 years.

Turquoise has been extracted from the mine for many years now. There are increasing concerns that the mine might one day run out of turquoise, and the money they make might decrease. This is why the mine’s board has been planning to develop the region’s tourism. 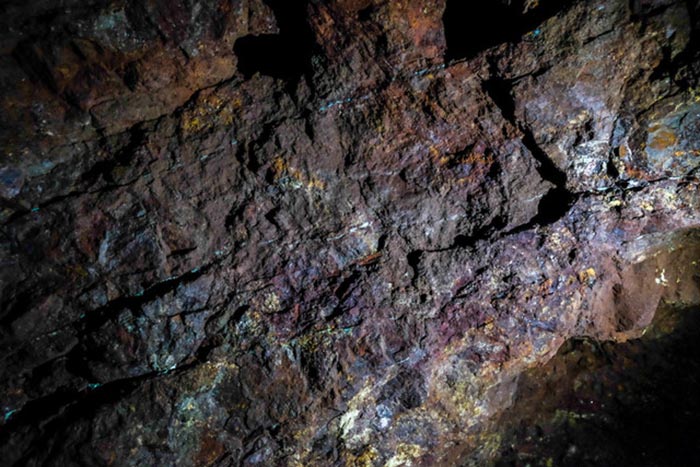 The mine manager, who is from the village and has secondary education, says, “As soon as they are able to work, young villagers either start working in the mine or begin processing the stones. So no one here pursues specialized education related to mining; we do most of the job based on experience, and we are pleased with it.” 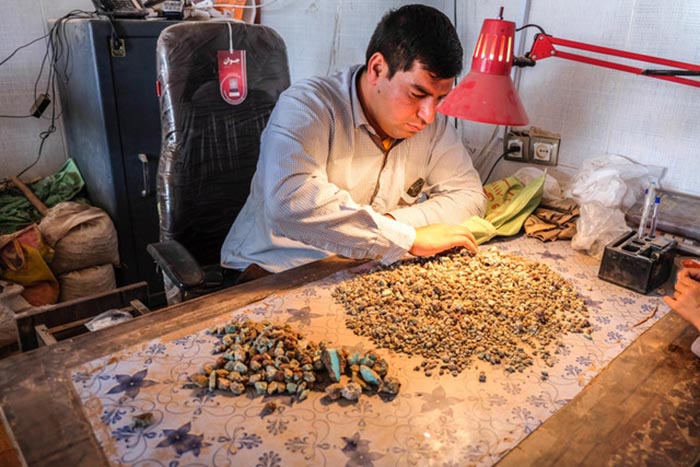 The people of Ma’dan village believe, “God has hidden every single person’s livelihood in a particular place in order for him/her to find; our livelihood lies in the stone.”