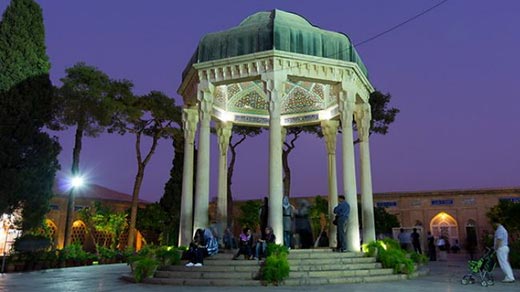 The tomb was awarded with certificate of excellence for the site’s unique architecture and the perfect behavior of its staff, said the director of Fars Province Cultural Heritage, Handicraft and Tourism Organization, Mosayyeb Amiri.

The agency also expressed its positive view on the historical tomb for the great facilities offered to its visitors.

While the view released after conducting a survey from visitors who are members of TripAdvisor, the website has recently named Hafez Tomb one of the world’s top historical sites, Amiri added.

Hafez tomb (Hafezieh) is one of the most popular attractions of Iranian southern city of Shiraz that is situated in a garden on the banks of Rukn-Abad river.

Built in 1773, the mausoleum acquired its present form in 1935 and designed by the French architect and archaeologist André Godard.

Hafez (1315-1390) is best known for his melodious sonnets and for intertwining a taste of Persian culture into his poetry.

His collected works composed of series of Persian poetry (Divan) was first translated into English in 1771 by William  Jones.

His poetry has also inspired many artists and musicians and his verses are recited during national occasions such as the Persian new year (Nowruz).