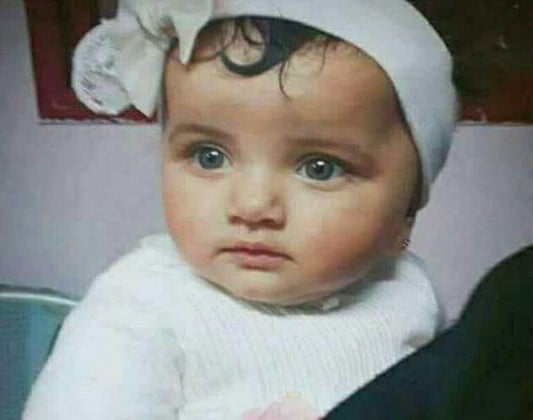 An eight-month-old baby girl recently died of tear gas inhalation in Gaza in an attack by Israeli forces on Palestinians holding rallies along the region’s border with the occupied territories in protest at the relocation of US embassy from Tel Aviv to Jerusalem al-Quds.

The photo of the innocent child has gone viral in the social media, shocking netizens across the world.

Over 60 Palestinians, including eight children, lost their lives during major protesting rallies on Monday, as the new US embassy was being inaugurated.

Dozens of tents have been erected along the border, each one labelled with the name of a town that was depopulated in the creation of the state of Israel, according to a report by Gaza Health Ministry quoted by Mizan News Agency.

The Israeli military used drones to fire tear gas, and in some cases firebombs, into the tents.

The relocation of the US embassy, which has so far drawn international condemnations, was carried out five months after Trump recognized the holy city as the “capital” of Israel, promising to move the US diplomatic mission from Tel Aviv to the city.

In the hours leading up to the inauguration, Israeli troops engaged in clashes with Palestinian protesters, some 2,500 of them sustained injuries, either through direct shooting or firing tear gas canisters.