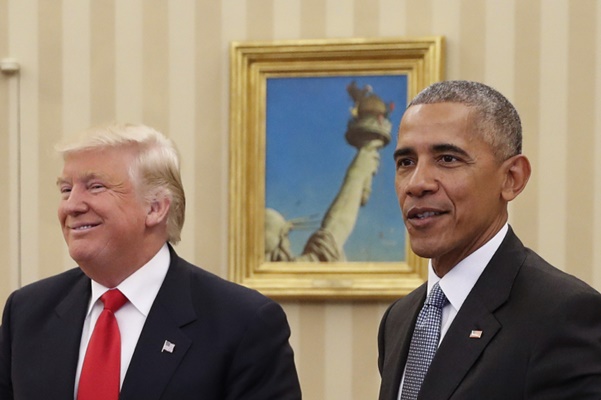 Trump’s anti-Iran rhetoric, alongside Obama’s efforts to threaten and put Iran under pressure, not only didn’t make the Iranians retreat, but strengthened their national unity, solidarity and support for the ruling system.

Ayatollah Ali Khamenei, the Leader of Iran’s Islamic Revolution, produced widespread, varied reactions among the international press and public opinion after he thanked Trump, the new US President, during a speech on February 7, for revealing the United States’ real face, and thus, proving that the perception Iran used to express for the past 40 years has been true.

Trump, of course, isn’t the first US President to show, by his actions and statements, that the Islamic Republic is right to take anti-American positions; and to solidify the integrity of Iranian people as a result: in fact, Obama had confirmed the Iranian leader’s predictions before Trump.

Shortly after Hassan Rouhani was elected as Iranian President in 2013, the new government decided to open direct nuclear negotiations with Washington. Iran’s Leader agreed with it to the surprise of many, and the press started to publish commentaries about Iran’s modified position and a new season in the relations between the two countries.

When  Rouhani  visited New York City for the first time in his presidency  to attend the United Nations General Assembly, which ended in his telephone conversation with Obama, I told the New York Times that the Iranian Leader was in a win-win situation: if the talks led to the reduction or elimination of economic sanctions that had damaged Iran’s economy, Ayatollah Khamenei would get the credit for approving the new negotiating strategy.

But he could also take the credit if the talks failed to reach any results, as “he will be praised for having proved his warnings over the dishonesty [shown] by the West towards Iran.”

“In that case his doubts will be proved once again,” I had stressed.

During the nuclear negotiations, the Iranian Leader held on to his positions, and repeatedly stated that despite having accepted the Iranian government’s suggestion for conditional negotiations with the US, he wasn’t optimistic about it.

“In my opinion, we won’t achieve the Iranian nation’s expected results in the negotiations. As an experience, however, it will solidify the Iranians’ empirical basis of the issue,” he stated.

Finally, Iran and P5+1 reached a deal that held up hopes for the end of a contrived crisis in Iranian nuclear program, which had led to cruel embargoes on the export of medicine and medical equipment to Iran!

Shortly after the nuclear deal was signed, Iran started to fulfil its obligations such as limiting the number of its centrifuges and enriched uranium reserves, as well as changing the function of IR-40 heavy water reactor; hoping that the US and Europe would end their economic war against Iran by lifting the sanctions.

However, according to high-ranking Iranian officials (not necessarily opposite to JCPOA), the US tries to weasel out of its obligations to lift banking and insurance sanctions, and to release Iran’s blocked assets.

Not only Washington didn’t change its behaviour despite the efforts and remarks by Iranian Foreign Minister and other top officials, and in spite of Iran’s complaint to the JCPOA Implementation Joint Commission, but also Obama refused to veto the Iran Sanction Act, considered to be violating the JCPOA by Iranian authorities, shortly before leaving the White House.

“How much did I point out that the US was dishonest and deceitful; that it wouldn’t keep to its words? Now see! Today I am not the only person who calls it dishonest; our dear officials, the negotiators who endeavoured so much to reach the deal, say so.”

By these statements in last November, the Iranian Leader not only slammed Washington for its deceitfulness, but confirmed that at this moment, public opinion, the ones who supported the negotiation with the United States at first, have admitted the rightfulness of his distrust of the US.

Washington’s dishonesty – planned to put pressure on Iran to give more concessions in regional issues, as believed by some analysts – didn’t push Iran to retreat, though: in fact, by making clear that the US was unreliable, it strengthened national solidarity among Iranians, and caused them to trust in the old belief that any effort to negotiate and re-establish the relations with the US would turn out to be ineffectual.

Trump’ controversial anti-Iran remarks during the US electoral campaign, and after his entrance to the White House in particular, should be considered as another US gift to Iran which solidifies Iranians’ national solidarity against the White House policies.

Trump’s actions, from his revelations about Washington’s role in ISIS formation to his visa ban on the citizens of seven Muslim countries including Iran, disappointed the Iranians who were slightly hopeful about the future of Iran’s relations with the US, leading them to the confirmation of the 40-year stances held by Iranian officials about the real face of Washington.

On the other hand, by implicitly threatening Iran to military invasion, Trump produced a reverse effect on the accomplishment of Washington’s objectives:  clear evidence shows that during his first days of presidency, Trump had strongly unified the Iranians, provoking a wider support of Ayatollah Khamenei views among them.

Neglecting the past experiences of US presidents, Trump integrated Iranians and excited their hostility toward his administration by making military threats against Iran, right in a moment when the country, as admitted by American commentators, was more powerful than ever.

Now it is not surprising to see anti-American hashtags in the pages of Iranian social network users who take stance against the US threat regardless of their political orientations.

On another level, Trump’s threats against Iran have even changed the positions of Iranian domestic opposition. Mohammad Khatami, the former Iranian President who is facing political constraints for having supported the protests after Iran’s 2009 elections, reacted to Trump by making a statement to invite all Iranians to a national reconciliation, and call on reformists to attend the February 10 nationwide rallies to celebrate the 38th anniversary of Iran Islamic Revolution’s victory: “Death to the US” slogan can be heard louder than all recent years right now!

It was surely because of the history of Iranian people’s national solidarity against foreign threats that Ayatollah Khamenei decided to let the Iranian nation give the country’s response to Trump’s threats.

“[Trump] says be afraid of me! No, we aren’t afraid of you. The people will respond to your threats in the streets on February 10; they will show you how the Iranian nation reacts to such threats,” the Leader said.