Many observers view the exclusion of Iran from earlier talks on Syria – under pressure from Riyadh and with a US green-light – as illogical, Atwan said.

Distinguished Arab analyst and journalist Abdel Bari Atwan says the presence of Iran’s Foreign Minister Mohammad Javad Zarif in a Vienna conference on Syria was most conspicuous, citing the view held by many observers that the exclusion of Tehran from earlier talks on Syria – under pressure from Riyadh and with a Washington green-light – was illogical.

What follows is the translation of a report Alalam – published in Farsi on October 30 – about Atwan’s statements in an opinion piece: 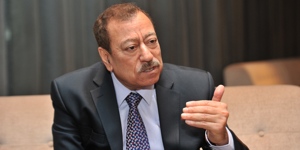 Atwan further said that Iran is a major player in the Syrian case and has lent unwavering support to the Syrian government over the past five years. It has also played a key role in helping the Syrian army and countering Arab and Western plots to topple the Syrian government as well as in preventing a repeat of the Libyan and Iraqi – and on a smaller scale Egyptian – scenarios in Syria.

In an interview with FRANCE 24 Wednesday US Deputy Secretary of State Antony Blinken admitted for the first time that it is hard to imagine a solution to the Syrian crisis without Iran’s involvement. Although the admission came four years too late, it was still important.

As for Saudi annoyance over Iran’s involvement in the Vienna talks, Atwan said the presence of the Iranians at the negotiating table gives Saudi Foreign Minister Adel Al-Jubeir indigestion.

The Arab analyst mocked the comments of Al-Jubeir that Bashar al-Assad has to leave office either through peaceful means or by war. “He even forgot his position and talked as if he was the representative of a major power equipped with nuclear weapons and an aerospace program.”

Al-Jubeir said that inviting Iran to the negotiations is an effort to see how serious Iran is and test the intentions of Iran and Russia on Syria.

Assuming a threatening tone, the Saudi foreign minister then said that if the talks failed, Riyadh would pursue other options.

Atwan doubted the other options of Al-Jubeir and recalled the Saudi failure in the war the Saudis lead through a fragile coalition against Yemen and said it’s still unclear what his other options are and whether another Decisive Storm is expected to sweep through Syria at a time when the first storm has yet to fulfill its objectives in Yemen.

The analyst also asked: Which country will be ready to be part of this new storm? Can Riyadh cross the Russian red line and provide anti-aircraft missiles to terrorists in Syria? What will happen if a Russian fighter is downed by such missiles? What will happen if they end up – by chance or design – in the hands of IS terrorists and are used against US or even Saudi fighters?