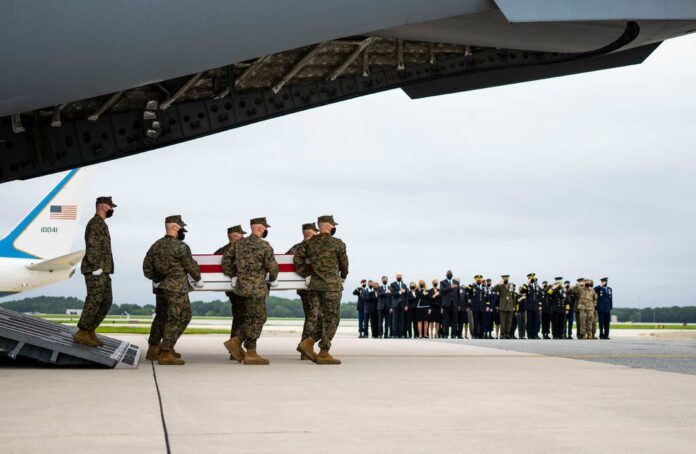 The administration of US President Joe Biden is withholding information from the public that could have predicted the fall of the Afghan government to the Taliban, Special Inspector General for Afghanistan Reconstruction (SIGAR), John Sopko, says.

The inspector general charged with reviewing U.S. involvement in Afghanistan noted on Friday that he has faced recent pressure from the State Department to redact some of their reports while noting the Pentagon classified much of its work detailing the failings of the country’s own military forces.

Sopko referenced numerous attempts to “impede” his work, adding that “U.S. agencies have not made honest reporting easy for SIGAR.”

Sopko’s comments, published on SIGAR’s website, came at the Military Reporters & Editors Association annual conference, where the inspector general details multiple efforts by State to get SIGAR to redact information from its reports, including removing all mentions of former Afghan President Ashraf Ghani.

“Shortly after the fall of Kabul, the State Department wrote to me and other oversight agencies requesting to ‘temporarily suspend access’ to all ‘audit, inspection, and financial audit … reports’ on our website because the Department was afraid that information included in those reports could put Afghan allies at risk,” Sopko said.

“But despite repeated requests, State was never able to describe any specific threats to individuals that were supposedly contained in our reports, nor did State ever explain how removing our reports now could possibly protect anyone since many were years old and already extensively disseminated worldwide. Nevertheless, with great reservation, I acceded to State’s initial request because it was made at the height of the emergency evacuation from Afghanistan,” he added.

After Sopko complied, State returned with another request, this time passing along a spreadsheet listing some 2,400 items it wanted redacted — something SIGAR reviewed and “found all but four to be without merit.”

“Given how hard the Department reportedly was working to evacuate Americans from Afghanistan and resettle Afghan refugees, I was surprised they found the time to go through every one of our reports and compile such an exhaustive list,” he said.

“Upon reviewing their request, it quickly became clear to us that State had little, if any, criteria for determining whether the information actually endangered anyone,” he added.

Among the requests was a plea to remove the name of a USAID official who publicly testified before Congress in 2017 and whose testimony is still posted on the committee’s site. It also asked SIGAR to remove Ghani’s name from all of its reports.

“While I’m sure the former President may wish to be excised from the annals of history, I don’t believe he faces any threats simply from being referenced by SIGAR,” Sopko said.

Sopko’s speech also detailed past efforts from the Department of Defense (DOD) going back to 2015 to restrict information on the performance of the Afghan security forces, purportedly at the request of the Afghan government.

Sopko added that information would have been important to share with lawmakers and blunted widespread surprise over the rapid fall of the country’s security forces to the Taliban.

“In essence, [it was] nearly all the information you needed to know to determine whether the Afghan security forces were a real fighting force or a house of cards waiting to fall. In light of recent events, it is not surprising that the Afghan government, and likely some in DOD, wanted to keep that information under lock and key,” Sopko stated.

“This information almost certainly would have benefited Congress and the public in assessing whether progress was being made in Afghanistan and, more importantly, whether we should have ended our efforts there earlier. Yet SIGAR was forced to relegate this information into classified appendices,” he noted.

Sopko ended with a call to DOD declassify this information now that the U.S. has withdrawn.

“DOD should immediately make available to SIGAR and the public the information restricted at the request of the Ghani government, for the simple reason that there no longer is a Ghani government and the Afghan security forces have already completely collapsed,” he continued.

Neither the State Department nor DOD responded to request for comment.

The Wall Street Journal reported Thursday, citing classified materials it obtained four different US intelligence agencies offered nearly two dozen assessments of the situation in Afghanistan before the country surrendered to the Taliban, but none of them managed to predict the rapid fall of Kabul.

The agencies reportedly rolled out their “scattershot assessments of the staying power of the Afghan military and government” instead, estimating that the government would not likely survive after the US withdrawal and analysing advances of the Taliban in the country from spring 2020 to July 2021.

After Biden announced his decision to withdraw the US troops from Afghanistan, several intelligence reports followed. One of them was a report by the Central Intelligence Agency (CIA), titled “Government at Risk of Collapse Following U.S. Withdrawal” and focused on how the Ghani administration would fall by the end of the year should the American troops leave the country. Then the CIA produced a document titled “Afghanistan: Assessing Prospects for a Complete Taliban Takeover Within Two Years”.

Another intelligence report from the Defense Intelligence Agency, crafted in June, suggested that the militants would stick to their strategy of isolating rural areas from Kabul for another year.

The summaries cited by The WSJ also offered insights into some of the recommendations received by both former President Donald Trump and his successor Biden as they tried to figure out how to withdraw the US troops from Afghanistan safely.

The Biden administration has been widely criticised for the chaotic evacuation from Afghanistan – which not only led to chaos at the Kabul airport for several days but also claimed the lives of 13 US soldiers and over a dozen of Afghan civilians. However, officials from virtually every US agency and department seemingly can point the finger at someone else for the fiasco.

Joint Chiefs of Staff Chair Gen. Mark Milley noted there was “nothing that I or anyone else saw that indicated a collapse of this army and this government in 11 days”, suggesting that the intelligence community failed to get the timeline right.

CENTCOM Chief General Frank McKenzie asserted back in September that it was Trump’s decision to sign a peace agreement with the Taliban that turned out to be a key factor that prompted the swift fall of the Ghani administration.

Intelligence officials have also defended their work, with CIA Director William Burns arguing that his agency performed well enough even though it could not say “with mathematical precision” that “former President Ghani in Afghanistan is going to flee his office and not tell his senior-most aides on the 15th of August”.