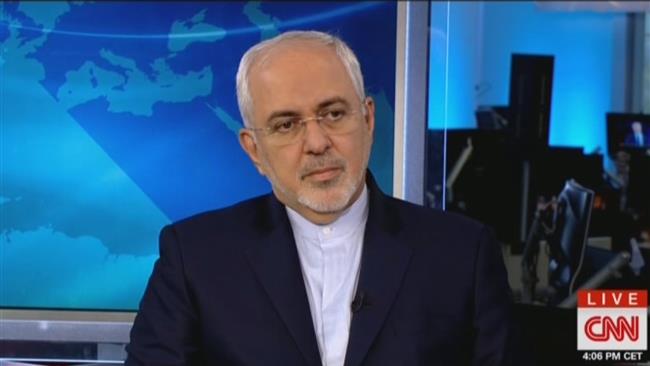 Iranian Foreign Minister Mohammad Javad Zarif says the Islamic Republic has been abiding by its commitments under the historic nuclear deal with the world powers, but the US has been violating the agreement.

In an exclusive interview with the US news network, CNN, on Sunday, Zarif said as per the agreement, known as the Joint Comprehensive Plan of Action (JCPOA), the IAEA is the “only accepted body to monitor the implementation of the nuclear side of the deal,” adding that the nuclear agency had repeatedly confirmed Iran’s commitment to the deal.

“The IAEA has verified, I believe, seven times now since the Implementation Day that Iran has implemented the deal faithfully, fully and completely,” Zarif said.

The Iranian foreign minister added that the same, however, cannot be said of the US concerning in its commitment to the deal, adding, “The United States has failed to implement its part of the bargain.”

When asked to specify an instance of US non-compliance with the deal, Zarif said, “For instance, when the White House made an announcement that President Trump used his presence in Hamburg during the G20 meeting in order to dissuade leaders from other countries from engaging in business with Iran, that is a violation of not [only] the spirit, [but also] of the letter of the JCPOA.”

“I believe the United States needs to bring itself into compliance with its part of the obligations under the deal.” he said.

Iran and the five permanent members of the United Nations Security Council – the United States, Britain, France, China and Russia – plus Germany signed the JCPOA on July 14, 2015 and started implementing it on January 16, 2016.

Referring to accusations leveled against Iran’s nuclear program, Zarif said, “I think people want to basically engage in scaremongering. Iran has a very clear track record. Iran was a victim of chemical weapons. Iran never used chemical weapons. Iran has had the capability, but decided not to go in the direction of producing weapons of mass destruction, because we believe that not only they are against our ideology, but also they do not augment our security. We believe that nuclear weapons would be a threat to our security rather than an asset for our security.”

Answering a question about Donald Trump’s Middle East policy and his effort to form an anti-Iran coalition, Zarif said, “All I can say is it’s a misplaced and misguided policy.”

The Iranian foreign minister went on to note that “we know where the terrorists are coming from; we know those who attacked the World Trade Center were citizens of which countries in the region and I can tell you that none of them came from Iran…. Most of them came from US allies.”

Zarif said, “I believe the ideology that is being spread unfortunately by our neighbors in Saudi Arabia throughout the world is responsible for hatred, for extremism, and fanaticism that is bringing … people who have nothing to do with Islam into our region and even beyond our region.”

Iranian foreign minister emphasized that none of terrorist groups as Daesh, Nusra Front and al-Qaeda and other terrorist organization have anything to do with Iran.

“All of them receive not only their ideology, but their financial assistance, their weapons, [and] their arms from others who call themselves US allies,” he noted.

Zarif is currently in New York to attend the UN high-level political forum on sustainable development on Friday.