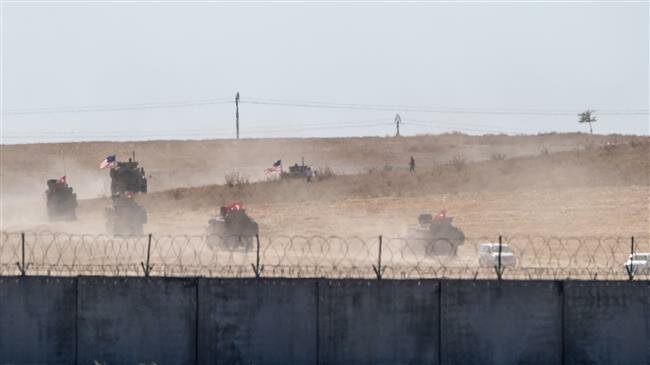 The United States and Turkey have begun joint patrols as part of a plan to create a “safe zone” in the Arab country’s northeast aimed at decreasing Ankara’s tensions with Washington-backed Kurdish militants there.

Turkey’s Defense Ministry announced the start of the ground patrols on Sunday, saying the joint mission is being supported by unmanned aerial vehicles.

“As a part of efforts to create a safe zone in the north of Syria to the east of the Euphrates, the Turkish and US military have started joint ground patrols using transport vehicles and drones to the south of Akcakale (a district of Turkey’s Sanliurfa Province), on the Syrian side,” the ministry said.

Earlier, an AFP journalist said six Turkish armored vehicles had crossed into Syria to join US troops. Two helicopters overflew the area as the Turkish vehicles drove through an opening in the concrete wall erected between the countries, the agency added.

The US and Turkey agreed on August 7 to set up the buffer zone to the east of the Euphrates River between the Turkish border and Syrian areas controlled by US-backed Kurdish militias, which Ankara views as terrorists affiliated with the homegrown Kurdistan Workers Party (PKK) militant group.

The zone is also said to be aimed at settling around one million displaced Syrians.

Washington’s support for the Kurdish militants in Syria has long been a source of tension between the two NATO allies. Turkey has launched two military operations in Syria against those militants and threatened a third if Washington fails to keep them away from the Turkish border.

In a bid to pressure the US into creating the area, Turkish President Recep Tayyip Erdogan said on Thursday that Turkey was “determined to set it up by the last week of September.”

Erdogan said last week that his country would not stand any delays in creating the “safe zone” in Syria and would establish it alone if talks with the US fail to produce results.

The Syrian government — which is opposed to Turkish and US military activities on its soil — has slammed the US-Turkish agreement, labeling it as a violation of Syria’s sovereignty and territorial integrity as well as international law.