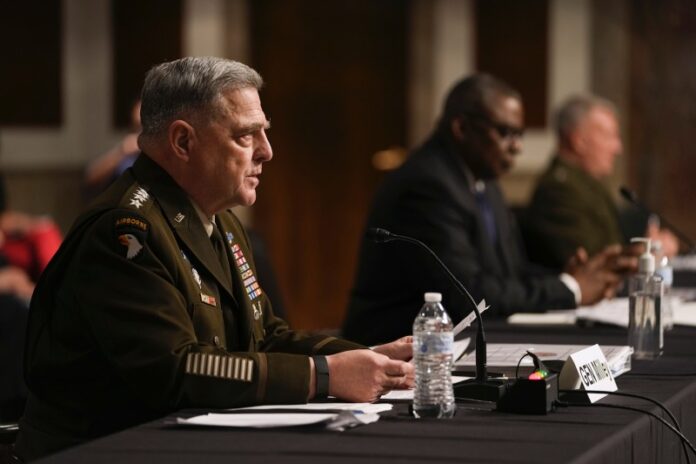 Top US military officers say they had recommended keeping 2,500 American troops in Afghanistan, contradicting remarks by Joe Biden that no one warned him not to pull out all forces from the war-torn country.

The remarkable testimony pits top military brass against the commander-in-chief as the Biden administration continues to face tough questions about what critics are calling a botched withdrawal that directly led to the deaths of 13 American service members, scenes of chaos at the Kabul airport, and the abandonment of American citizens and at-risk Afghans in the war-torn country.

Gen. Kenneth “Frank” McKenzie, the commander of U.S. Central Command, told the Senate Armed Services in a hearing Tuesday that he recommended maintaining a small force of 2,500 troops in Afghanistan earlier this year.

He also noted that in the fall of 2020, during the Donald Trump administration, he advised that the U.S. maintain a force almost double the size, of 4,500 troops, in Afghanistan.

In answering questions from Sen. Jim Inhofe (R-Okla.) about his advice, McKenzie said he would not share his “personal recommendation” to the president.

But he went on to say that his “personal view”, which he said shaped his recommendations, was that withdrawing those forces “would lead inevitably to the collapse of the Afghan military forces and, eventually, the Afghan government”.

McKenzie also acknowledged that he talked to Biden directly about the recommendation by Gen. Scott Miller, the commander of U.S. Forces Afghanistan until July, that the military leave a few thousand troops on the ground, which Miller detailed in closed testimony last week.

“I was present when that discussion occurred and I am confident that the president heard all the recommendations and listened to them very thoughtfully,” McKenzie added.

McKenzie’s remarks directly contradict Biden’s comments in an Aug. 19 interview with ABC’s George Stephanopoulos, in which he said that “no one” that he “can recall” advised him to keep a force of about 2,500 troops in Afghanistan.

During the interview, Stephanopoulos asked Biden point blank: “So no one told — your military advisers did not tell you, “No, we should just keep 2,500 troops. It’s been a stable situation for the last several years. We can do that. We can continue to do that”?

Biden answered: “No. No one said that to me that I can recall.”

During the hearing on Tuesday, Inhofe next asked Gen. Mark Milley, chair of the Joint Chiefs of Staff, if he agreed with the recommendation to leave 2,500 troops on the ground. Milley answered affirmatively.

Milley declined to give a direct answer, stating only that “I’m not going to characterize a statement of the president of the United States”.

Sullivan then grilled McKenzie about the accuracy of the president’s statement, stressing that the general does not “have a duty to cover for the president when he’s not telling the truth”.

McKenzie again declined to criticize the president, noting only that “I’ve given you my opinion and judgment”.

Later in the hearing, Sen. Tom Cotton (R-Ark.) asked Milley if he should have resigned when the president decided to fully withdraw from Afghanistan against the generals’ advice.

Milley argued that resigning in protest would have been a “political act”, and that the president has no obligation to agree with his military advice.

“It would be an incredible act of political defiance for a commissioned officer to just resign because my advice is not taken,” Milley said, stating that “this country doesn’t want generals figuring out what orders we are going to accept and do or not. That’s not our job”.

Milley added that his decision was also informed by the experience of his father, who fought at Iwo Jima.

“[My father] didn’t get a choice to resign,” Milley continued.

“Those kids there at Abbey Gate, they don’t get a choice to resign,” Milley underlined, referring to the 13 American service members who died during the evacuation from Kabul in late August when a Daesh suicide bomber detonated an explosive vest.

“They can’t resign so I’m not going to resign. There’s no way,” he underscored.

Milley described the end of America’s two-decade war in Afghanistan as a “strategic failure”.

Appearing alongside Milley and McKenzie at a Senate Armed Services Committee hearing, Defense Secretary Lloyd Austin also acknowledged various mistakes the Biden administration made amid the drawdown, even as he touted the scale of the U.S. military’s massive evacuation effort out of Kabul’s main airport.

The question-and-answer session represented one of the first opportunities for congressional lawmakers to grill the Pentagon’s top brass on the planning and execution of the Afghanistan pullout, which devolved into chaos in August as the Taliban quickly overran the country and forced a hectic evacuation mission.

In his opening statement, Austin told senators that while the Pentagon “planned to evacuate between 70,000 and 80,000 people” from Hamid Karzai International Airport, American forces were ultimately successful in transporting more than 124,000 people out of Afghanistan.

The U.S. military also evacuated more than 7,000 people per day after initially planning “to move between 5,000 and 9,000 people per day”, Austin said, and “at the height of this operation,” an aircraft carrying evacuees “was taking off every 45 minutes”.

“It was the largest airlift conducted in U.S. history, and it was executed in 17 days.” Austin continued, adding, “Was it perfect? Of course not.”

The defense secretary was similarly frank in assessing some of the longer-term oversights of the United States’ 20-year military presence in Afghanistan, concluding that “we helped build a state … but we could not forge a nation”.

“The fact that the Afghan army that we and our partners trained simply melted away — in many cases without firing a shot — took us all by surprise,” Austin said, adding, “And It would be dishonest to claim otherwise.”

Milley, in his own opening statement, described the withdrawal as a “10-year, multi-administration drawdown”, and told senators it was “clear” and “obvious” the war in Afghanistan “did not end on the terms we wanted, with the Taliban now in power in Kabul”.

The Joint Chiefs chair became more blunt as the hearing progressed, saying on at least two occasions that the end of the war in Afghanistan had been a “strategic failure”, despite the fact that the noncombatant evacuation that ended in late August was a “logistical success”.

“There’s been four presidents, 20 commanders on the ground, seven or eight chairmen of the Joint Chiefs, dozens of secretaries of Defense, et cetera” throughout the U.S. war in Afghanistan, Milley said, adding, “And outcomes like this are not determined in the last five days, the last 20 days or the last year, for that matter.”

“Outcomes in a war like this,” he continued, “an outcome that is a strategic failure — the enemy is in charge in Kabul, there’s no way else to describe that — that outcome is a cumulative effect of 20 years, not 20 days. And there are a huge amount of strategic, operational and tactical lessons that need to be learned from this.”

Both Milley and McKenzie also said the Trump administration agreement brokered last February in Doha, Qatar — which called for a gradual drawdown of U.S. troops in Afghanistan, with a total withdrawal set to be completed by May 1 of this year — negatively affected the morale of the Afghan security forces.

Milley went on to emphasize that the Taliban “was and remains a terrorist organization, and they still have not broken ties with al Qaeda”.

“I have no illusions who we are dealing with,” Milley said of the militant group now in control of Afghanistan, adding, “It remains to be seen whether or not the Taliban can consolidate power or if the country will further fracture into civil war.”

Milley stated the Pentagon “must continue to protect the United States of America and its people from terrorist attacks coming from Afghanistan,” warning that “a reconstituted al Qaeda or Daesh with aspirations to attack the United States is a very real possibility.”

The White House on Tuesday sought to minimize the impact of congressional testimony from top military officials that contradicted Biden’s past assertions that he was not urged to keep thousands of troops in Afghanistan.

“I think it’s important for the American people to know that these conversations don’t happen in black and white, like you’re in the middle of a movie,” press secretary Jen Psaki said during the daily press briefing.

Just prior to the briefing, Psaki pointed to part of Biden’s mid-August interview with ABC News in which the president acknowledged that military advisers were “split” on whether to leave a residual force in Afghanistan rather than having the U.S. completely withdraw.

She also downplayed the divergence between the testimony of military leaders and the White House on the withdrawal strategy, stating that Biden was not looking for “a bunch of yes men and women”.

“Ultimately, regardless of the advice, it’s his decision,” Psaki added.