US Does Not Dare Mention Military Option against Iran: IRGC 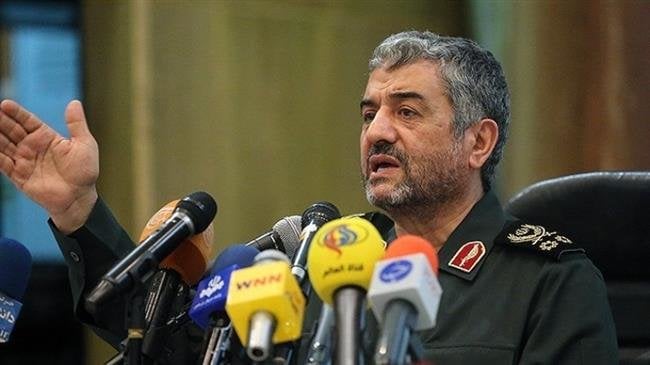 The top commander of Iran's Islamic Revolution Guards Corps (IRGC) says the United States' power is on the decline and faced with Iran's increasing might, it does not dare mention the military option against the Islamic Republic anymore.

Speaking at a ceremony in Tehran on Thursday, Major General Mohammad Ali Ja’fari said Iran is no more facing a security threat in the light of its rising power.

“We have distanced ourselves from the security threat since many years ago and no superpower even dreams of aggression” against Iran while all of them “are extremely afraid of a conflict with Iran and its consequences,” the senior military commander said.

“When we compare the US power now with 40 years ago, we see that as put by the Leader [of the Islamic Revolution Ayatollah Seyyed Ali Khamenei] America is on the decline and today, they themselves confess to their weakness in the face of Iran. Iran is now so powerful that they do not dare mention the military option against Iran anymore,” the IRGC chief commander added.

Speaking in early November after the administration of US President Donald Trump decided to reinstate all US sanctions on Iran, which had been removed under the 2015 nuclear deal, known as the Joint Comprehensive Plan of Action (JCPOA), Ayatollah Khamenei said America’s power is on the decline and the country is much weaker today than it was 40 years ago.

“Many acclaimed American politicians believe that America’s soft war has been worn out,” the Leader said, adding, “Its hard power, namely America’s economic and military power, is also declining.”

Elsewhere in his remarks, the IRGC commander referred to the existing economic and management problems in the country, noting that although the Islamic Republic is currently engaged in an economic war with enemies, “the overall conditions in the country are not comparable to other regional countries.”

The latest remarks by the IRGC commander came only a few days after a senior Iranian commander said the country will never allow US warships to sail near its territorial waters.

Deputy Chief of Iran’s Army for Coordination Rear Admiral Habibollah Sayyari made the remarks in reaction to the return of US aircraft carrier USS John C. Stennis to the Persian Gulf on Friday after a long absence.

“The response of the Armed Forces and the Army of the Islamic Republic is that we will never allow them [US warships] to come near our territorial waters,” Sayyari said.

Coincident with the arrival of the US aircraft carrier, the IRGC held the main and final stage of massive exercises, dubbed the Great Prophet 12, in the Persian Gulf, launching an “offensive” component in Iran’s defensive strategy for the first time.