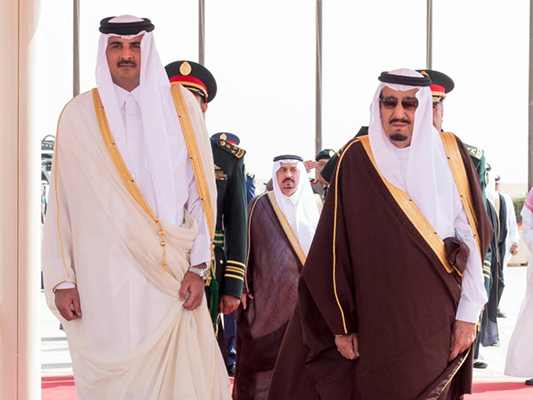 Qatar on Monday responded to a list of demands from Saudi Arabia and its allies after they agreed to give Doha another 48 hours to address their grievances.

The details of the response have not been officially released, but the Lebanon-based Al Mayadeen TV published unconfirmed details of the Arab country’s response on Tuesday.

According to the report, Qatar has told Saudi Arabia and its allies that it will lower the level of its ties with Iran only if all Persian Gulf littoral states do the same and expel all Iranian nationals.

It will also cut its economic ties with Tehran only if all Persian Gulf littoral states, particularly the United Arab Emirates, do the same. The UAE, particularly Dubai, has great business relations with the Islamic Republic.

Qatar has also vowed to close Turkey’s military base in the Qatari territory only if all Persian Gulf littoral states shut down foreign bases in their countries.

In its response, the Doha government denied having any ties with terrorist groups designated by the United Nations. It also reminded Saudi Arabia and its allies that the UN does not regard the Muslim Brotherhood as a terrorist group. The boycotters have urged Qatar to cut its support for the Brotherhood.

Qatar also rejected all groundless allegations about its support for terror. “We only accept the UN list of terrorists,” it said in the response.

The Doha government has also emphasized it will not hand over political refugees and Sunni figures oppressed in their own countries.

Qatar also vowed that it will close its media outlets, including the Al Jazeera TV, only if Al Arabiya, Sky News Arabia, Al-Hadath, Egyptian media are shut down.

The report also quoted Qatar as saying that it does not meddle in Arab countries’ affairs, while “the UAE interferes in Qatar and Kuwait’s affairs, and is working on a coup in Oman.”

Qatar has also denied having ties with certain opposition figures in Persian Gulf littoral states. However, it added, giving citizenship to those interested is a territorial issue.

As the final article of its response, Qatar has also rejected paying any compensation to boycotters, and even demanded compensation for ‘stupid moves’ made against Doha in recent days.

Neither Qatar nor Saudi Arabia and its allies have confirmed the abovementioned details yet; however, the preconditions set by Riyadh and other Arab states for normalization of ties with Doha had also been disclosed in Arab media a few days before their official release, and were finally confirmed.