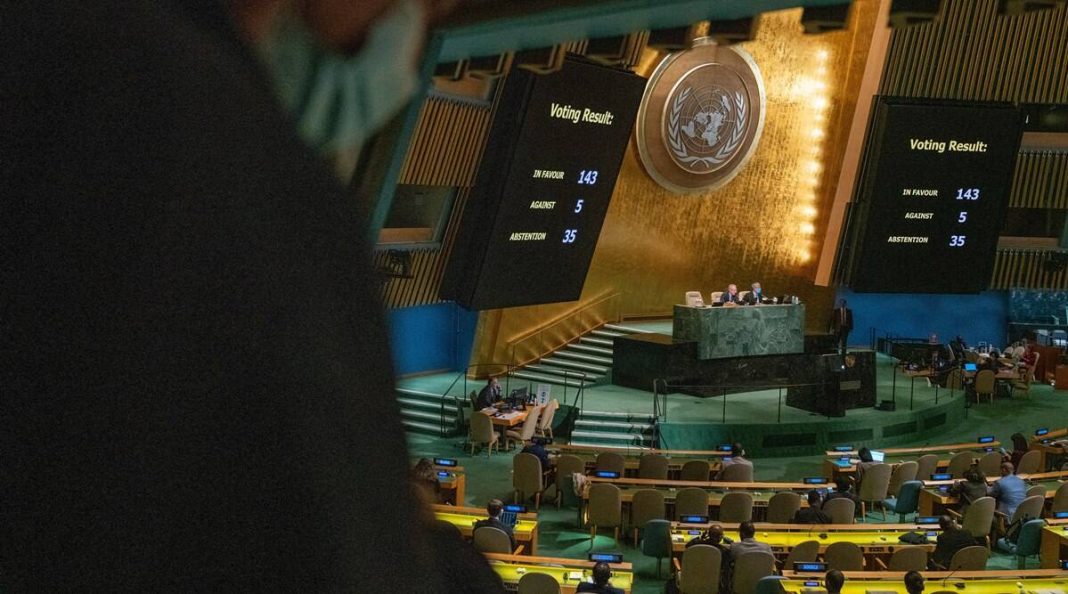 The United Nations General Assembly has adopted a non-binding resolution accusing Moscow of an “attempted illegal annexation” and calling on member states to ignore the results of referendums in four east Ukrainian regions on joining Russia.

Wednesday’s 143-5 vote followed the General Assembly’s refusal on Monday to use secret ballots, as requested by Russia, amid pressure from the US and its allies to join them in condemning Moscow for the accessions.

Russia’s UN Ambassador Vassily Nebenzia had argued that for many countries “it may be very difficult” to express their views publicly.

Before launching its military operation in Ukraine in February, Russia recognized the sovereignty of two Donbass regions, the Donetsk (DPR) and Lugansk (LPR) People’s Republics, arguing that the central authority in Kiev had failed to represent and protect people living there. Residents of two other regions, Kherson and Zaporozhye, also voted by wide margins in public referendums last month to declare independence and join Russia. President Vladimir Putin signed unification treaties with the four new Russian regions on October 5.

The UNGA condemned those plebiscites as “illegal,” saying the four regions are temporarily occupied because of Russian aggression, in violation of Ukraine’s territorial integrity and sovereignty. Wednesday’s resolution calls on all nations and the UN to refuse to recognize the regions as parts of Russia.

Moscow argued the referendums were the only legitimate way for people to exercise their right for self-determination and be protected from their former government. In a recent speech, President Vladimir Putin cited “an inherent right sealed in Article 1 of the UN Charter, which directly states the principle of equal rights and self-determination of peoples.”

Putin also previously argued that the UN itself set a legal precedent for the referendums, after its International Court of Justice ruled that Kosovo’s unilateral declaration of independence from Serbia in 2008 did not violate international law.

UN leaders have dismissed such parallels, with General Assembly President Csaba Korosi reiterating on Monday that the referendums in the former Ukrainian regions were illegal, while calling on the parties to “find a political solution based on the UN Charter and the international law.”

Rejecting the referendums as a “sham,” Kiev – which receives military assistance, training and intelligence from NATO nations on an unprecedented scale – said it is determined to beat Russia on the battlefield. Ukraine insists the Russian offensive was completely unprovoked, even as its former president admitted that Kiev’s main goal since 2014 Minsk agreements was to use the Germany- and France-brokered ceasefire to buy time and “create powerful armed forces.”