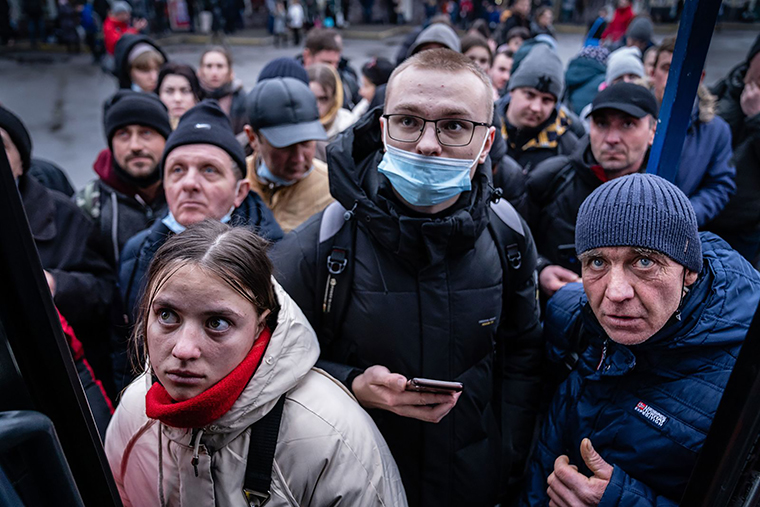 An estimated 100,000 Ukrainians have fled their homes and that several thousand have crossed into neighbouring countries, mainly Romania and Moldova, according to the UN refugee agency.

Several thousand Ukrainians have crossed into neighbouring countries, mainly Moldova and Romania, while an estimated 100,000 have fled their homes and are uprooted in the country after Russia’s invasion, the U.N. refugee agency has confirmed.

Shabia Mantoo, spokesperson of the U.N. High Commissioner for Refugees (UNHCR), stated the figures were compiled from reports from national authorities and its staff and partner agencies.

The head of the International Committee of the Red Cross (ICRC) has warned Russia’s invasion of Ukraine could unleash death and destruction on a scale that is “frightening to contemplate”.

“I fear increased suffering, with the potential of massive casualty numbers and extensive destruction of civilian objects like water and electricity plants, as well as mass displacement, trauma, family separation, and missing persons,” Peter Maurer said in a statement.

“The ICRC has seen many conflicts start and escalate in recent years, but too few of them end, and in each one, it is the civilian populations that bear the consequences,” he added.

Russian President Vladimir Putin early on Thursday announced a military operation in Ukraine, leading to international condemnation of what world leaders called the start of a Russian invasion.

Ukrainian President Volodymyr Zelensky said in a speech Thursday that Ukraine has been “left alone” to defend against the Russian invasion.

“Today Russia attacked the entire territory of our state,” Zelensky stated, adding, “And today our defenders have done a lot.”

“They defended almost the entire territory of Ukraine,” he continued, noting, “Which suffered direct blows. They regain the one that the enemy managed to occupy.”

Zelensky said that “we are supported,” citing conversations he had with worldwide leaders after the invasion.

However, he added that Ukraine is “left alone in defense of our state.”

“Who is ready to fight with us?” Zelensky asked, stressing, “Honestly — I do not see such.”

Zelensky has stated more than 137 people had died and hundreds more were injured after Putin ordered a military operation in Ukraine.

Zelenksy, citing preliminary data, announced in a statement that 137 people had died, including 10 military officers, and that 316 had been injured.

The Ukraine’s president ordered a full military mobilization on Thursday amid the deadly invasion of his country.

Russian forces are making advances on Ukraine’s capital Kyiv and Moscow has continued to flow forces into the country, the official claimed.

Ukraine’s military has said that Russian forces aim to block Kyiv while creating a land corridor on the southern coast towards the annexed Crimea peninsula and the Transdniestria region of Moldova.

Ukrainian forces have battled Russian invaders on three sides after Moscow mounted an assault by land, sea and air.

A senior Ukrainian defence official has also warned that Russian forces would enter areas just outside Kyiv after officials noted the city and other locations had been struck by Russian missiles in the early hours of the morning.

Russian mechanized forces that had entered Ukraine through Belarus were about 20 miles (32 kilometers) from Kyiv, top Joe Biden administration officials told House lawmakers in a briefing Thursday, according to two sources on the call.

The officials described another Russian element that entered Ukraine from Russia being a bit further away, but that both were headed toward Kyiv with the goal of encircling the city and potentially toppling the Ukrainian government, according to the lawmaker on the call.

The Ukrainian Defense Ministry has claimed its armed forces have inflicted some 800 casualties on Russian forces since the invasion began in the early hours of Thursday.

It was not immediately clear whether the ministry was referring solely to the number killed.

The ministry added more than 30 Russian tanks had been destroyed, as well as seven Russian aircraft and six helicopters.

“Horrific Russian rocket strikes on Kyiv,” the foreign minister wrote on Twitter, adding, “Last time our capital experienced anything like this was in 1941 when it was attacked by Nazi Germany”.

Top European Union leaders have said Putin “must and will fail”, as they agreed new sanctions over Russia’s invasion of Ukraine. They added he is trying to bring the continent back to the age of empires and confrontations.

The bloc’s leaders agree in principle at an emergency overnight summit to impose new economic sanctions, joining the US and others in taking steps such as curbing Russia’s access to technologies.

The EU will freeze Russian assets in the bloc and halt its banks’ access to European financial markets as part of what EU foreign policy chief Josep Borrell described as “the harshest package of sanctions we have ever implemented”.

European Union leaders have agreed to sanctions on Moscow that target 70 percent of the Russian banking market and key state-owned companies, including in defence, EU Commission chief Ursula von der Leyen said in a tweet.

The United Nations Security Council will vote on Friday on a draft resolution that would condemn Russia for invading Ukraine and require Moscow to immediately and unconditionally withdraw, but the measure is set to fail because Moscow can cast a veto.