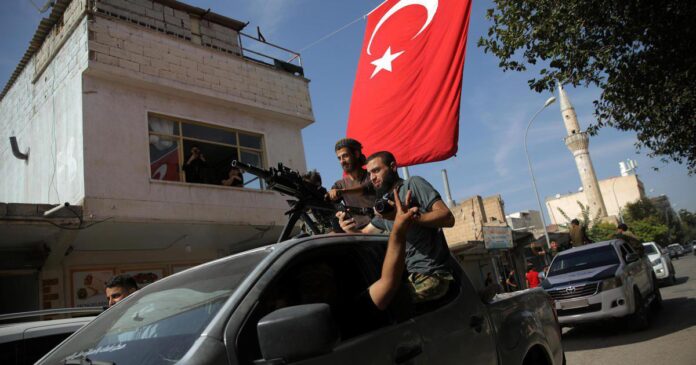 Iranian political analyst Ali Hassan Heidari has, in an op-ed regarding Turkey’s recent invasion of Syria known as “Peace Spring”, weighed in on the overt and covert goals of Ankara’s move.

The war against Syria, which began in 2011, caused widespread devastation and left all Syrian minorities, including the Kurds living there, in an unwanted battle. Provoked by the US and Israel, the Kurds created their own autonomous regional area called Rojava in northern Syria after successfully fighting the ISIS.  However, they ignored the fact that Washington has never been a reliable strategic ally for the Kurds, not just for them, but neither for figures like Shah of Iran, Saddam Hussein, Hosni Mubarak, Gaddafi, etc. Their policies of accompanying Kurds and turning their back on them have been in line with tactical policies, and have been a function of America’s vital national interests in the region.

Meanwhile, more than 11,000 Kurdish men and women from Syrian Democratic Forces were killed in the fight against ISIS. Nevertheless, the United States seized all the gains in its own name, and oppressed the Kurdish people and sent them to the war under imprudent leaders and sacrificed them as the cost of its compromise.

At least for two times Turkey has carried out relatively large-scale military operations (Operation Olive Branch and Operation Euphrates shield) against the Kurdish armed parties in Syria. In recent years, Syrian Kurds have been looking at the US as a key ally. The recent experience showed that this reliance has faded away and, ultimately, US President Donald Trump with a phone call refrained from fulfiling all of Washington’s obligations and stabbed the Kurds in the back. The US’s decision has brought the region into a new cycle of instability that has increased the potential for the resurgence of terrorist movements.

The Turkish army’s operation known as “Peace Spring” is being carried out by some 40,000 Turkish troops and approximately 15,000 Syrian National Army forces in the eastern Euphrates region including Ayn Isa, Tal Abiad, Ras al-Ayn, and Qamishli. Turkey’s goals can be categorised into proclaimed and covert ones.

Turkish political and security officials have stated that the operation is not only aimed at the PKK and the YPG which threaten the security of the nation and the integrity of the Turkish government. They claim one of the most important objectives of the operation is to fight ISIS! Turkey plans to establish a safe zone for 500,000 Syrian refugees and resettle them there. However, there are many speculations about Turkey’s long-term and hidden goals.

One of the most possible reasons for this is the problems President Erdogan is facing inside Turkey. In addition to inflation and economic recession, Turkey’s ruling party lost control of four major cities, including Istanbul, Turkey’s economic hub, and Ankara, in major local elections this year. Therefore, much of the effort to attack Rojava is to arouse Turk’s sense of nationalism and to seek the support of the people and to force them to adopt a nationalistic ideal.

The issue of peace for Turks is just an excuse, as Erdogan’s government wants to deploy several million Syrian refugees to the northern Syria’s safe zone, generally Arabs and opponents of Bashar al-Assad’s government in the Kurdish parts of northern Syria. Turkey hopes to resettle Syrian refugees, mainly Arabs, by deporting Kurdish forces from some areas of the eastern Euphrates. This policy is to change the demographic structure of the region from Kurdish to Arabic, and also is aimed at establishing a formal Syrian opposition in the border region. This strategy is to revive Syrian opposition groups, especially the escaped Syrian army commanders, to destabilise the central government, and to expand Turkey’s influence and political and security presence inside Syria with the greater purpose of creating a safe zone and legalising this dangerous idea with the help of opposition figures.

By doing so, the Turkish government will remain the strategic supporter of Syrian anti-government groups, and on the other hand, anti-government Syrian groups in addition to controlling Kurdish movements, will be a reliable factor in maintaining and consolidating Turkey’s strategic depth.

Unfortunately, Erdogan and his government do not have a good understanding of the changes of the time and do not realise that a government can no longer simply ignore the territorial integrity of an independent state. What Ankara is concerned about is the disintegration of Turkey’s territory while it seeks the same for neighbours and helps break up a neighbouring country. The second point is that it is not possible to go to war with terrorism by use of force and terrorist forces because it is not possible to change the history, culture and demographics of a region.

Another point to note is that the number of Kurds in Syria is not high enough to worry Turkey; unless we come to the conclusion that Turkey sees itself weak in confrontation with the Kurds and their abilities, so it is trying to suppress the Kurds militarily. Instead of spending their capital on these wars, it is better for the countries of the region to spend it on welfare, democracy, peace and reconstruction of their own. They would better leave the issue of the Syrian Kurds to the Syrian government and army.

Turkey, if sincere, should help the Syrian government maintain its territorial integrity by cutting off support for the Syrian government’s opposition and pave the way for the deployment of Syrian army to its border. Ankara must not help reorganise terrorist groups under the pretext of repressing the Kurds and bring the region back into a period of long-term instability. Erdogan and the Turkish military must understand that their attack is an opportunity for the ISIS. Obviously, chaos can provide an opportunity for the ISIS to revive. Currently, more than 5,000 ISIS militants of different nationalities are being held by Kurdish forces.

Turkey’s presence in Syria could have consequences for the Arab country. As Ankara can upkeep unrest in Syria and continue civil war there with support of the opposition. While Turkey’s targeted territory is currently beyond the control of the Syrian central government, Ankara’s invasion could mean changing the region’s situation to the benefit of insurgents who wanted to topple Bashar al-Assad’s government.

However, the experience of the last century and the recent history of Syrian developments have shown that powers such as the US and European countries and their allies are not a reliable friend for the Syrians. They should watch out for the leaders and agents of the US and Israel, who always take the innocent Kurdish people to the political slaughterhouse of Western actors to maintain their own position among the Kurdish currents.