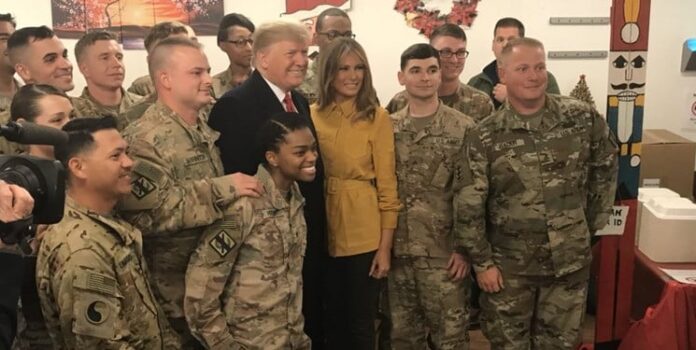 In particular, his comments on the possibility of using Iraq as a base for the United States to launch military operations in Syria have further enraged Iraqi statesmen.

The Reform and Construction Bloc at Iraq’s parliament issued a statement, condemning Trump’s visit to Iraq.

The parliamentary bloc has also stressed in its statement that US troops’ pullout from Syria is no justification for them to stay in Iraq and use Iraq as a base for the United States in the Middle East region.

Mahmoud Rubaie, a member of the Asaib Ahl Al-Haq political party, also said making a trip to Iraq like this by Trump is a testament to Washington’s disregard for the independence, sovereignty and credibility of the Iraqi government, which makes it all the more necessary to expedite efforts to adopt a law on the expulsion of foreign forces from Iraq.

Meanwhile, Hashem Mousavi, the spokesperson for Al-Najba’a Iraqi Movement, said “stupid” Trump should know that Iraq secured its sovereignty with blood, and that no US military bases would be established in Iraq. He said it is incumbent upon the Iraqi government to expel American troops because their presence in Iraq will harm the country’s sovereignty.

Also, Jafar Hosseini, the spokesperson for Hezbollah Brigades affiliated with the Popular Mobilizations Forces, said Islamic resistance forces will make the US withdraw its troops from Iraq.

He said Trump’s snap visit to Iraq and limiting it to simply meeting American soldiers at a military base show the US president has a sense of insecurity in Iraq.

According to Hosseini, Islamic resistance commanders in Iraq have vowed to cut off the hands that intend to encroach upon neighbouring countries, namely Syria.

He emphasized that it is up to the Iraqi nation and parliament, and not Trump, to decide on US troops’ pullout from Iraq.

As negative reactions to Trump’s visit to Iraq continue to pour in, Iraqi legislator Fateh al-Khazali said Trump should know that Iraq has not been the same as before since 2014, and the Iraqi government should expel US forces form Iraq. He said victorious Iraq is not a US state, and that Iraqi Prime Minister Adil Abdul-Mahdi should discharge his responsibilities according to Article 5 of the Constitution.

Khazali said the US, which suffered defeat in Iraq, wants to return to this country once again one way or another, “but we will not allow for that to happen.”

He said Trump’s meeting with US forces shows they do not have an advisory and training role, adding the Iraqi government should accept its responsibility in that regard.

The Iraqi lawmaker noted that the Iraqi parliament has already ordered a timetable be drawn up for the withdrawal of all foreign forces from Iraq, and added this has not materialized yet due to the existing corruption.

Naim al-Aboodi, another Iraqi legislator, also disclosed that Trump has asked Iraqi authorities, especially the prime minister, president and parliament speaker, to meet him at the airbase he is visiting.

Meanwhile, the Iraqi prime minister’s media office announced that American officials had already informed Baghdad of Trump’s willingness to travel to Iraq on Tuesday to congratulate the new Iraqi government.

The office said the Iraqi government had welcomed Washington’s request and that the Iraqi premier invited Trump to Baghdad, and that Trump, for his part, invited the prime minister to visit Washington and the White House.

As announced by the office, Trump was supposed to have a meeting with Abdul-Mahdi, but the meeting was called off due to “differences over how it should be held, and both sides, in a phone conversation, discussed the situation, especially the circumstances following Washington’s announcement that it would withdraw its troops from Syria. They also discussed mutual cooperation in fighting ISIS terrorists and establishing stability and security in regional countries.”

In the meantime, the White House weighed in on why the US president and the Iraqi prime minister did not meet during Trump’s visit to Iraq. The White House confirmed that there was no meeting between the two men because Baghdad was informed of Trump’s visit only shortly before the trip took place, which required the necessary measures to be taken to ensure the security of Trump during the meeting.

According to the White House, Trump invited Abdul-Mahdi to visit Iraq during his phone conversation, which was welcomed by the Iraqi side.

Trump and his wife met with US troops in Iraq in an unexpected trip. This is the first time Trump meets US troops outside the United States since he took office. He had been criticized by the US military for this reason.

The plane carrying Trump and his wife along with a group of his advisors and secret service agents plus a large number of journalists touched down at al-Asad airbase in west of Baghdad.

In a meeting with US forces at the airbase in Anbar province, Trump announced that Washington would use Iraq as a base to launch operations in Syria should need arise.