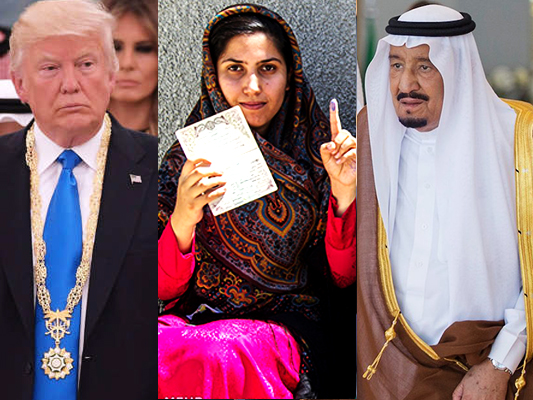 The high turnout in Iran’s presidential election will leave the US president no excuse to circumvent the reality. Here is an account of the Friday’s votes, which Trump should better read.

US President Donald Trump’s trip to Saudi Arabia started on May 20, 2017, one day after millions of Iranian people went to the polls to pick a president. Trump is visiting Riyadh in his first overseas trip as president.

Here is an Iranian voter’s account of the Friday’s elections in Iran, which is a must-read for the US president:

It is 7 p.m. I’m leaving home with my family to find a less crowded polling station nearby, somewhere in the centre of the Iranian capital, Tehran. But I’m trying in vain! Just one hour to go before polls close in the presidential election as well as the city council elections, I must hurry and not waste time. I get to a school used as a polling station. It is located on an old street named Malek, which was a major thoroughfare five or six decades ago, but now is home to middle-class families who form part of the 10-million-strong Tehran population. 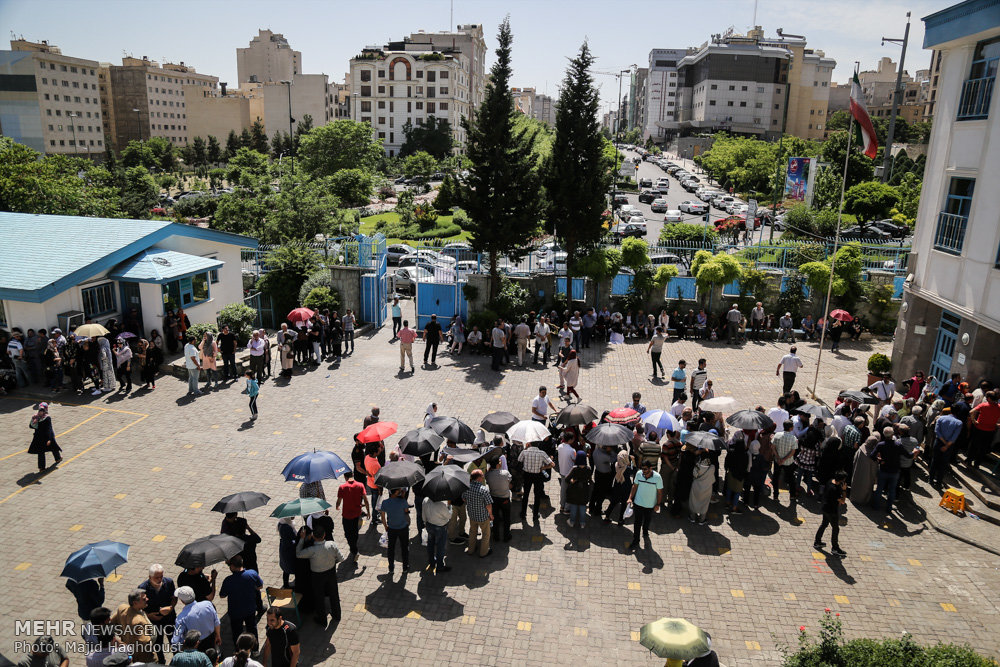 I stand at the end of the queue in the pavement. I know it’s between 100 and 150 metres from the ballot box. But soon I won’t be the last one in the queue. I look back and see 60 to 70 others standing behind me. The one right behind me seems to be a 45-year-old man, who has come to vote along with his wife and children. He himself begins to talk:

“I’ve come here for the sake of my two kids; If the day I was as old as him (he refers to his one-year-old son he is holding in his arms) my father had the chance to stand in the queue to cast his ballot, If people could vote in elections, now these votes would be held electronically and we wouldn’t have to wait in the queue in this hot weather for so long with these two kids and waste our time.”

I don’t want to ask what his job is. It looks like he prefers to spend time talking about why he is voting. I express my agreement with him and try to give him hope that the next election will be held electronically. He seems happy to see we agree with him. His face says it all.

His child has gotten restless. He keeps playing with the father’s glasses and grabs the bottle of water from his hand. The father is so patient that makes me surprised. His wife checks on them once in a while, and it is clear that they have divided the labour before coming to the ballot box. In the meantime, their other child wants a ball to play with the new friends he has found in the yard! The wife leaves her husband with the two children to buy him a ball. 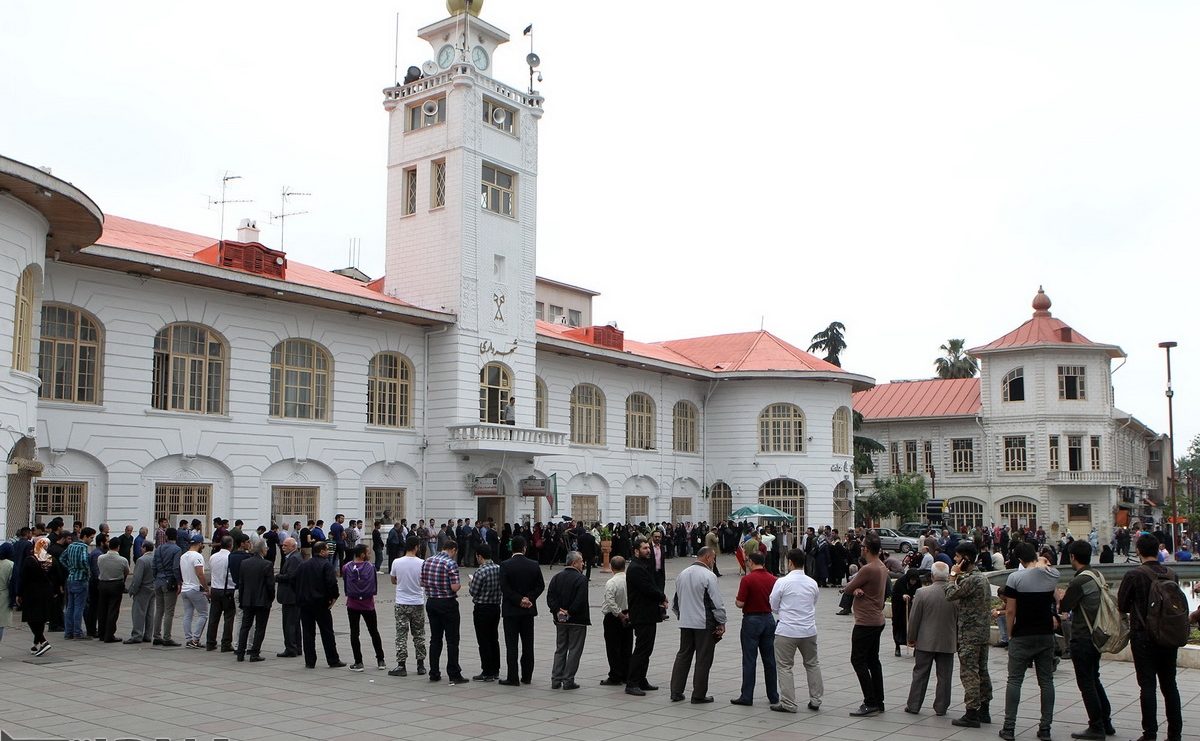 A woman, who says is a teacher, comes to our help. She offers to take care of the elder boy and amuse him until his mother arrives. She makes a gesture to say she can do it.

A middle-aged man wearing casual, sports clothes looks as if he were on a picnic. He breaks the silence:

“I bet more than 70% of the people (eligible voters) will cast their ballots. But see how much of people’s time is wasted? It’ll take at least 3 hours to get our job done here!”

I tell him we probably won’t be able to cast our votes if it takes 3 hours as the voting is planned to end at 8 pm, but he has the answer at his disposal: “Be sure, it will be extended to 12 pm.”

He then multiplies 40 million (number of voters) by 1 hour (the average time an Iranian must spend to cast his/her vote) and says, “If you multiply 40 million hours by 10 thousand tomans (the average material value of one hour of an Iranian’s time according to him), then our people’s standing in the queues will cost more than $100 million, but the result is worth it. 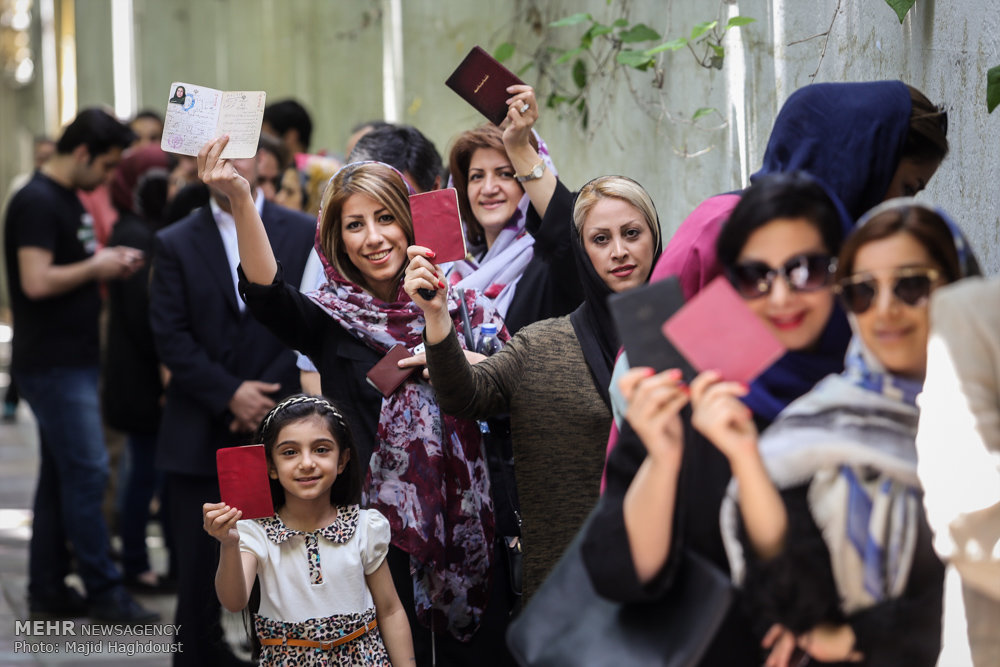 “Now, what will the result be? Who’s going to win?” I ask. And in order to know whether or not he has any memory of the bitter post-election events back in 2009 (including the unsubstantiated claim that the presidential election, in which Mahmoud Ahmadinejad was elected president for a second term, had been rigged), I further asked, “Do you believe in vote counting?”

“Hundred percent!”, answered the middle-aged man with certainty and without hesitation.

My companion said a lot of things in this exciting trip, from the time we stopped at the queue till the time we arrived at our destination, i.e. the ballot box (as predicted by my new friend, it took us three hours to vote). I like him talking. I, for one, was making my own assessments and drawing conclusions. In fact, our conversation had gradually turned into a street round table! How enjoyable and useful companionship with people is.

In the meantime, I remembered Donald Trump’s trip to Riyadh. It came to my mind when a lady at our street round table said: “In this country, so many people have turned out to vote, but some countries which do not even know what the ballot box means are respected at the UN human rights council and are handed over the rotating presidency of the world body; moreover, US officials call us terrorists.”

What if the US president crosses the Iranian airspace on his way to Riyadh and sees with his own eyes the enthusiasm and fervour among Iranian voters going to the polls to pick their president.

All of a sudden, an idea crossed my mind. Of course, I knew my dream was impossible to come true.

“What if the US president crosses the Iranian airspace on his way to Riyadh and sees with his own eyes the enthusiasm and fervour among Iranian voters going to the polls to pick their president. Then he could ask the Saudi king, ‘Any news about Iran’s elections?’, ‘When will YOU hold elections?’,” I thought.

If this dream of mine could come true, Saudi Arabia’s distinguished guest Donald Trump, who has now migrated from the “Trump Tower” to the White House, and who is running a major country which can influence the world’s destiny, might distance himself from the land of dreams and illusions, and might put a question to his host and the heads of state of the other 17 countries who have travelled to Riyadh to adopt an anti-Iran stance: 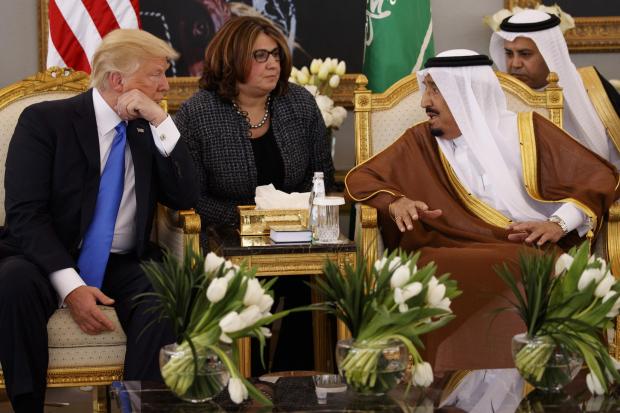 “Gentlemen, folks, any news about Iran? Looked like all people were out on the streets; I’ve heard there was an election today. Well, I was on my way here. Was there an election?” asks Trump.

“Excuse me, what did you say?” asks the Saudi king.

“Do you have elections in your country? Have you ever voted? Are you elected by your people?” asks Donald surprisingly while raising his voice.

“Hey pal! Move on! We’re 3 metres behind!”, says my new, middle-aged friend while tapping me on the shoulder.

“I was in Saudi Arabia! I even visited the Saudi royal court,” I replied.

They looked surprised after hearing what I said. One of them, the female teacher, said, “Then you were in your imaginations,” and I confirmed, while giving a regretful smile.

I leave the polling station at 10 p.m. (Tehran time). It’s a pity I didn’t get my far-sighted friend’s cell phone number.

I’m going to miss him and other new friends who I got to know while standing in the queue for voting, despite their different viewpoints and despite the fact that some of them were not going to vote for my favourite candidate. I’m also going to miss the election mood on that Friday too, the determining day when the Iranian nation showed they had deeply understood democracy and were loyal to an establishment which was the fruit of the 1979 Islamic Revolution. 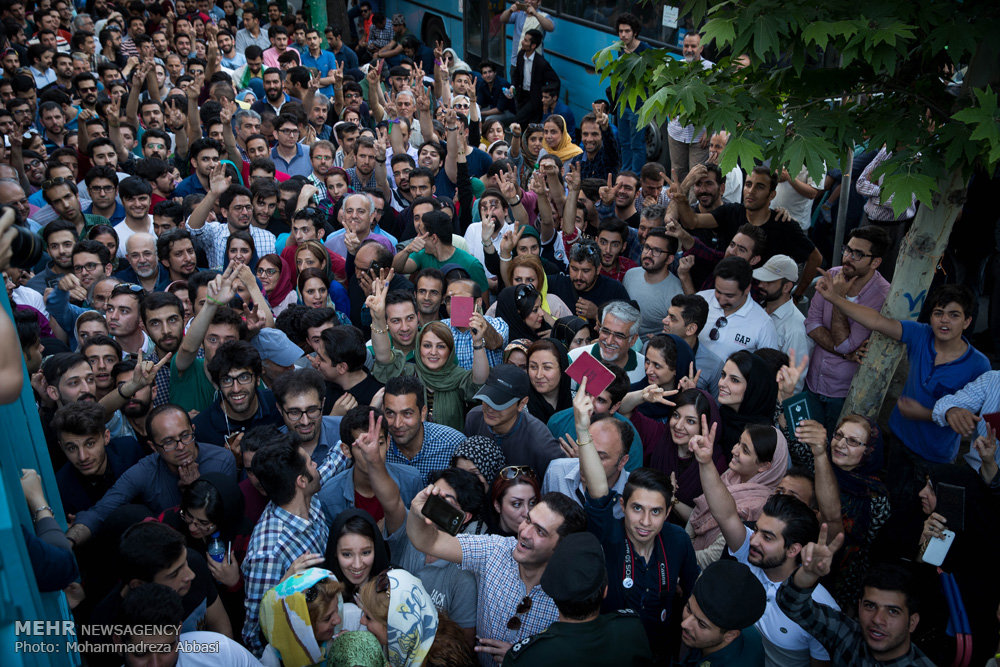 The Iranian people showed that they determine their destiny themselves and believe in the strategic motto “Independence, Freedom, Islamic Republic” despite all its ups and downs, and that they keep going to reach a better future.

Can Iran and Iranians, who on Friday (May 19, 2017) displayed the most eye-catching show on the path to peaceful coexistence and peace, be expected to threaten the security of the region and the world?

How can the heart of Iran and the Iranian nation be a breeding ground for terrorism?

After all, where was the evil of Takfirism born? 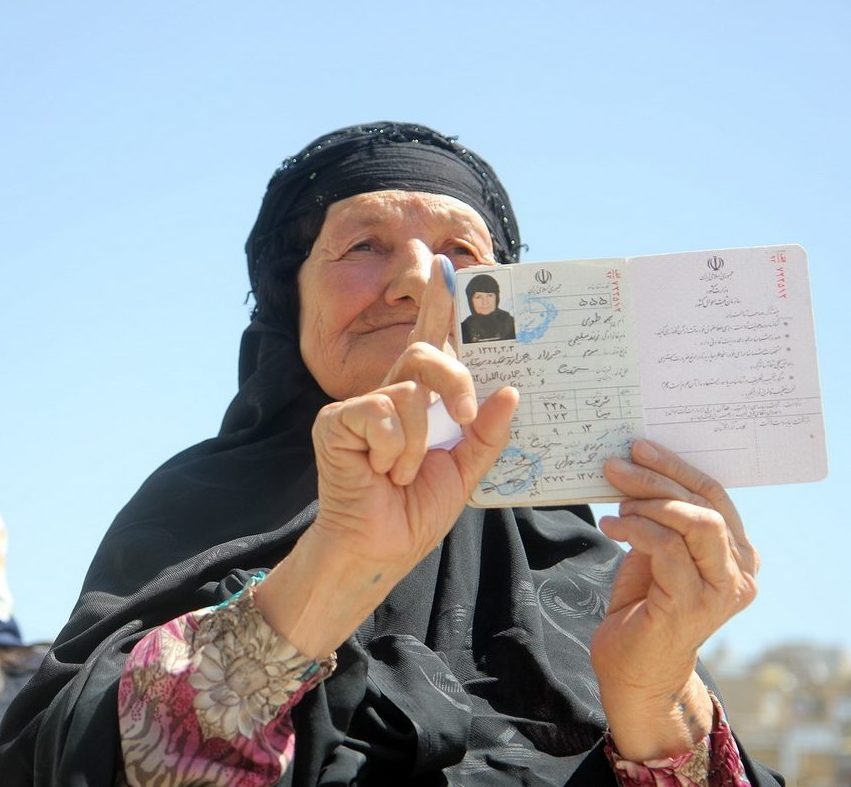 It is time to ponder on and review the status of Iran on the international stage. It is still possible to understand the reality and not to play with the destiny and future of mankind for a few barrels of oils and the Arab states’ petrodollars.

Mr. Trump! Read the reports, prepared by friends and foes alike, of the brilliant Friday in Iran. You may have avoided the Iranian airspace for fear of Iranian missiles on your way to Riyadh; but don’t try to avoid the reality!

Please see the realities on the ground and try to use them to revise the options on your table accordingly. This is the only way to make the US great again.

New jobs cannot be created in the US by developing and selling advanced warfare, and turning the Middle East and Persian Gulf into an arms depot. Using criteria that belong to past centuries will waste the chance of peace and lead to a Hitlerian glory, which is not lasting. 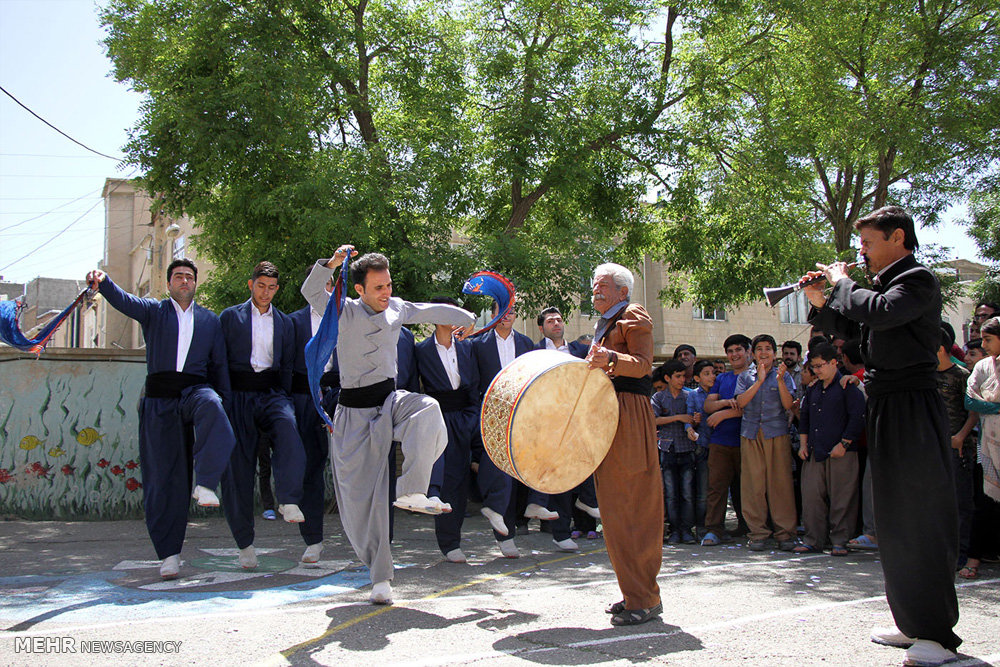