Trade minister reports on agenda and meetings with Spanish delegation 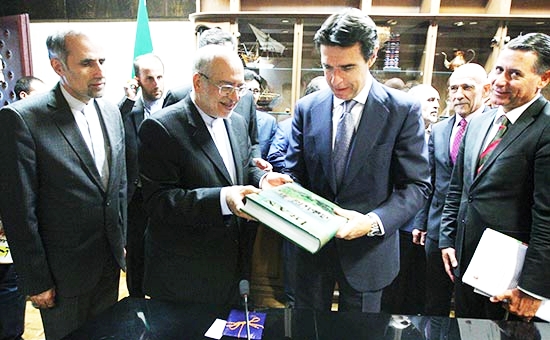 Cooperation between Iran and other countries should help us find our way into foreign markets, the industry minister said.

Representatives from about 60 Spanish companies are part of a delegation visiting Iran to hold talks with Iranian officials.

The following is the translation of an excerpt of a September 8 SMT report on the comments Iranian Minister of Industries, Mines and Trade Mohammad Reza Nematzadeh made after a meeting with the Spanish delegation:

As states, we facilitate investment and serve as a bridge between the private sectors of Iran and Spain. Iranian and Spanish officials hold talks, but it is the businesses that specify certain areas for mutual industrial and technological cooperation.

It is impossible to work out details of industrial cooperation between the two countries and implement them all in one session, but it’s beneficial to both sides to get to know each other, particularly at chamber of commerce meetings.

Joint ventures will definitely spur economic growth, but in my opinion, the economic impact of such projects won’t be felt overnight.

It takes at least two years for the results of a joint venture to be felt. But because our industries and the production sector do have the potential, we can start investing in these units and see the results next year.

Fortunately, over the past two months, we have seen willingness on the part of a lot of countries from Europe and other parts of the world to visit Iran to either offer apologies [for staying away from the Iranian market during the sanctions era] or set the stage for cooperation with Iran. Prior to sanctions, we had good economic and trade relations with many of these countries.

Anti-Iran sanctions prompted many countries to prevent their companies from cooperating with Iran. This week, senior officials representing the Czech Republic, Spain, and Austria have arrived in Iran [in preparation for the post-sanctions era].

During a meeting with the Spanish delegation, we put forth the idea of forming a joint economic commission so that we can make proper decisions to bolster economic relations between the two countries.

Our decisions also cover policies which are acceptable to both sides. They include support for the private sector and elimination of obstacles in the way of banking and insurance relations.

We will draft a text for the formation of the joint economic commission by next month and after we reach an agreement, we can pursue trade, industrial and economic cooperation between the two nations.

As for industrial clusters, Spain has great experience. In this regard, Iran has taken serious steps in recent years and we try to connect the industrial clusters of both countries. Because a majority of them are made up of small- or medium-sized industrial and production units which cannot launch cooperation with each other on their own.

During the meeting, we decided to pave the way for cooperation between Iranian and Spanish industrial clusters.

Since the beginning of negotiations with foreign delegations, Iran has laid out its policies in line with the principles of the resistance-based economy which promotes maximum exploitation of domestic capabilities coupled with international interaction and cooperation.

Our policies on negotiations with foreign delegations have been approved of by the president. Our policy-making priorities definitely focus on joint ventures and market sharing.

World countries seek to secure their share of the Iran market; we too want our share of the world market and exports. Therefore, if Iran has a joint venture or economic cooperation with a country, such collaboration should be in keeping with market sharing.

As we offer a share of our market to foreign countries, they should offer a share of their markets to Iranian producers and industrialists so that Iran can promote its non-oil exports. As for modern technologies and science-based industries, it is necessary for Iran and Spain to cooperate, and we underline such collaboration.

Technology transfer to Iran is necessary

The transfer of technology from Spain to Iran is necessary and the two countries should have cooperation on modern technologies and science-based industries.

Presently, the volume of trade between Tehran and Madrid is around $350 million, before sanctions it was 2.5 times more than the present figure.

Promotion of quantitative and qualitative capabilities of Iran’s industry sector

All world countries know anti-Iran sanctions are in the process of being removed, but definite decisions by world giants in doing business with Iran will be made after all sanctions have been lifted.

Of course, sanctions will be terminated in the next few months. We advise Iranian and foreign companies to hold talks over general policies. We know well that a lot of agreements have been reached between Iranian companies and top world firms with some even being finalized.

The Iran market versus the world market

Many companies around the world are waiting for the removal of sanctions, because as long as they are in place, they are not legally permitted to open letters of credit.

Some are concerned that following the removal of sanctions, the Iran market will be dominated by foreign countries, but we believe that cooperation between Iran and other countries should help us find our way into foreign markets. We should also promote our industrial, scientific and practical capabilities, both quantitatively and qualitatively.