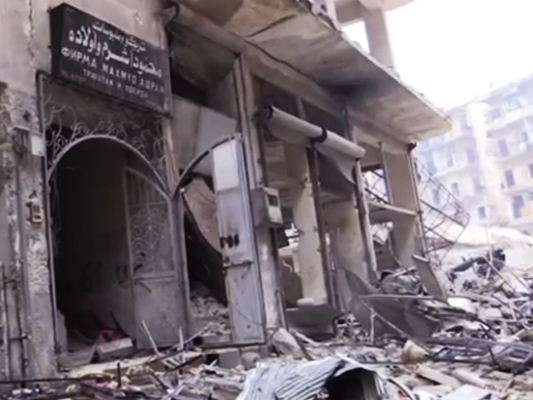 Militants apparently used torture devices and stockpiled dozens of large-calibre mortars and shells in eastern Aleppo before the Syrian Army entered the area. Stunning footage has been filmed at Al-Nusra Front’s firebase after it was retaken.

A military operation against terrorists in Aleppo, once Syria’s second-largest city with booming industries and now the worst-hit place in the country, cornered the militants into a small 2.5-km sliver of land.

Footage from the scene suggests that in eastern Aleppo, civilians were apparently subjected to torture and abuse, Russia Today reported on Friday.

Syrian Army soldiers showed cells and large chains that appear to be torture devices inside a building allegedly used as a firebase by militants in the Al-Jazmati district.

“This is one of the means of torture that was used by the militants. When we came here and liberated this residential block, civilians were sitting here in the prisons. We released them,” said Muhammad Hamud, a Syrian Army soldier, pointing at chains hanging from the ceiling.

He added that the army liberated around 15 captives in that location, afterwards showing black flags purportedly belonging to ISIS and Jabhat Fateh al-Sham (formerly known as Al-Nusra Front).

A sizeable stockpile of mortar rounds as well as a large machine used to manufacture ammunition, are also seen in the building – a sign of the militants’ capacity to produce sophisticated weaponry right on the frontline, RT reported.

The mortar shells and ammunition production technology may originate from ISIS-controlled territories in either Syria or Iraq.