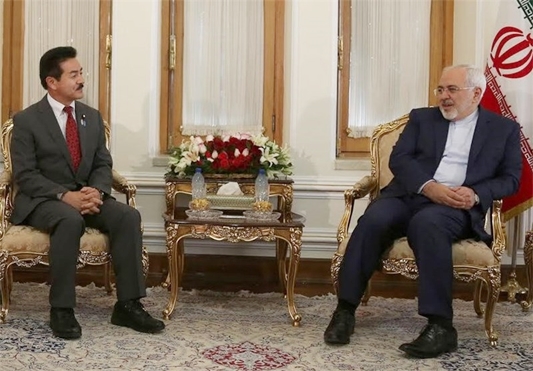 Iranian Foreign Minister Mohammad Javad Zarif on Sunday hailed the close bond between Tehran and Tokyo, and underlined the potential for development of Iran-Japan ties in different fields.

“Japan is considered one of the Islamic Republic of Iran’s close friends,” Zarif said in a meeting in Tehran with Chairman of the Japanese Parliament’s Foreign Policy and Defense Committee Masahisa Sato.

“There are many grounds for cooperation between the two countries,” he said, adding that Tokyo can become one of Tehran’s major economic partners.

Elsewhere in his remarks, Zarif referred to Iran’s condemnation of a recent attempted coup in Turkey and a terrorist attack in Nice, France, saying that Tehran attaches importance to peace and stability in neighboring Turkey and to the fight against terrorism all over the world.

The Japanese lawmaker, for his part, stressed his country’s keenness for expansion of ties with the Islamic Republic.

He referred to the Japanese parliament’s recent approval of the Iran-Japan Joint Investment Agreement and hoped that Iran’s parliament will also give its approval to the agreement as soon as possible to pave the way for development of bilateral economic relations.

Masahisa Sato further stressed the common views of Iran and Japan on issues like the recent incidents in Turkey and France, and said the two sides can deepen their cooperation in such fields as combating terrorism and helping to enhance regional security.