Tehran as Seen from the International Space Station 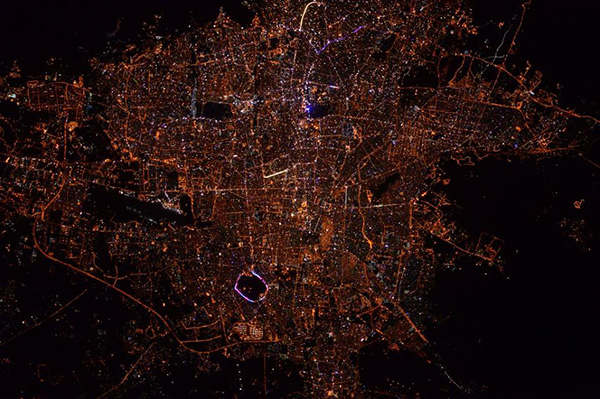 [IFP: Last week, we brought you photos of Tehran from the air. Now, we take you even further out, with a photo of the capital from space. We can see the city lit up at night, with many major thoroughfares and sites clearly visible. The photo was taken from the International Space Station (ISS), with text below from Press TV.]

A new photo taken from the International Space Station (ISS) shows the Iranian capital Tehran at night, glowing with lights and beauty.

Firouz Naderi, an Iranian scientist and the former director for Solar System Exploration at NASA’s Jet Propulsion Laboratory (JPL), posted the photo on his Facebook account on Saturday, saying that it had been taken by American astronaut Tim Kopra, the current commander of the station, on Thursday.

“The pink big oval at the bottom apparently is Park Velayat in south of Tehran. It used to be a big military garrison,” Naderi further commented on a feature of the photo.