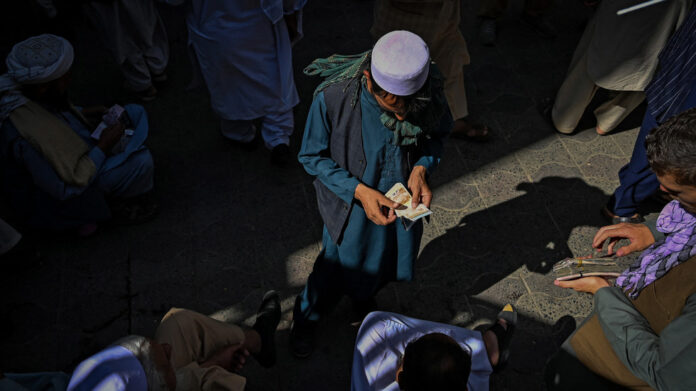 The use of foreign currencies has been completely banned in Afghanistan, the Taliban announced, citing national interests and current economic conditions as reasons for the move.

The Taliban has announced a complete ban on the use of foreign currency in Afghanistan, a move certain to cause further disruption to an economy pushed to the brink of collapse by the abrupt withdrawal of international support in the wake of the group’s takeover of the country.

“The Islamic Emirate instructs all citizens, shopkeepers, traders, businessmen and the general public to … conduct all transactions in Afghanis and strictly refrain from using foreign currency,” the Taliban said in a statement posted online by spokesperson Zabihullah Mujahid.

“Anyone violating this order will face legal action,” the statement added.

“The economic situation and national interests in the country require that all Afghans use Afghani currency in their every trade,” the statement read.

The use of US dollars is widespread in Afghanistan’s markets, while border areas use the currency of neighbouring countries such as Pakistan for trade.

The Taliban’s government is pressing for the release of billions of dollars of central bank reserves as the drought-stricken nation faces a cash crunch, mass starvation and a new migration crisis.

Afghanistan’s previous Western-backed government had parked billions of dollars in assets overseas with the United States Federal Reserve and other central banks in Europe.

But after the Taliban took over the country in August, the US, as well as the World Bank and the International Monetary Fund (IMF), decided to block Afghanistan’s access to more than $9.5bn in assets and loans.

The decision has had a devastating effect on Afghanistan’s healthcare and other sectors, all of which are struggling to continue operations amid cutbacks to international aid.

With a harsh winter fast approaching, Sulaiman Bin Shah, the former deputy minister of industry and commerce, told Al Jazeera late last month that the Afghan people “are paying a huge price because of the slow pace of diplomatic processes and negotiations”.

The World Food Programme has announced some 22.8 million people – more than half of Afghanistan’s 39 million population – were facing acute food insecurity and “marching to starvation”, compared with 14 million just two months ago.

The food crisis, exacerbated by climate change, was dire in Afghanistan even before the takeover by the Taliban.

Aid groups are urging countries, concerned about human rights under the Taliban, to engage with the new rulers to prevent a collapse they say could trigger a migration crisis similar to the 2015 exodus from Syria that shook Europe.

The departure of US-led forces and many international donors left the country without grants that financed three-quarters of public spending.

The finance ministry stated it had a daily tax take of roughly 400 million Afghanis ($4.4m).