Syrians, Not Others, Should Decide for Syria’s Future: Leader 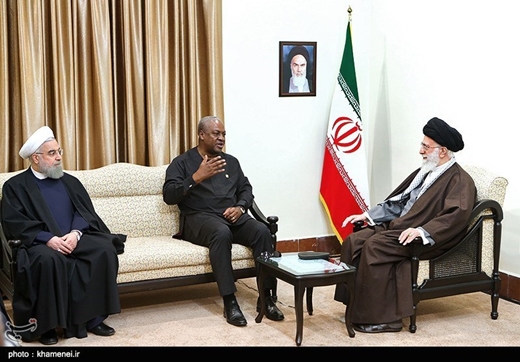 Leader of the Islamic Revolution Ayatollah Seyed Ali Khamenei blamed hegemonic powers, the US in particular, for the sufferings of the people of Syria, and reiterated that the Arab country’s fate cannot be decided by non-Syrian sides.

“We believe that a solution cannot be prescribed for a nation from outside that country,” Ayatollah Khamenei said Sunday in a meeting with visiting Ghanaian President John Dramani Mahama here in Tehran.

Elsewhere, Imam Khamenei referred to hegemonic powers, particularly the United States and the Zionist regime of Israel, as the root causes of all problems, stressing that their interests are served by creating insecurity and wars in different parts of the world.

“Terrorist groups in our region and in Africa are trained by the spy agencies of the US, Britain, and the Zionist regime,” the Leader said.

Ayatollah Khamenei added that the solution to such issues as the Syrian crisis, terrorism, and the sufferings of the Palestinian people lies in close cooperation of independent countries.

The Leader further highlighted the capacities of Iran and Ghana and hoped that the visit by the African country’s president would lead to enhancement of cooperation between Tehran and Accra.

Mahama, for his part, praised Iran’s serious fight against terrorism, and expressed the hope that the Syrian issue would be resolved with the effective role Iran plays in the anti-terror campaign.

He also appreciated Iran on behalf of African nations for its support for the continent’s freedom-seeking movements, the anti-Apartheid movement of South Africa in particular.