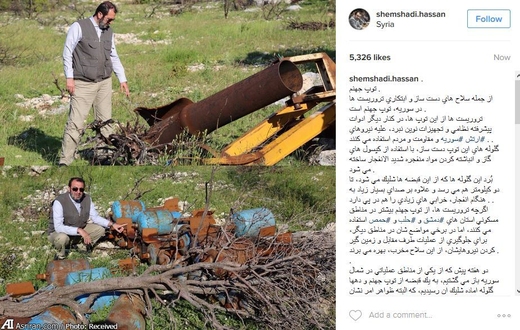 Hassan Shemshadi, an IRIB correspondent in Syria, published a photograph on his Instagram page of a strange handmade weapon used by terrorists in Syria.

Shemshadi’s remarks, which were covered by Asr-e Iran and translated by IFP, state that the creative weapon is known as the Cannonball of Hell and is used besides other advanced military equipment against Syrian army and popular forces.

“The balls of the handmade cannon are made of gas capsules and highly-explosive compressed materials.”

“They have a range of 2 kilometres and make a horrible sound. They can also cause severe damage when they explode.”

Terrorists have mainly used the Cannonball of Hell in residential areas in Damascus, Aleppo, and Homs; however, the weapons are also used in positions in other regions to hinder the other side’s operations and cripple their forces, Shemshadi noted.

“When we were returning from a battlefield in northern Syria two weeks ago, we saw one of these cannons and tens of balls ready to fire. However, one of the balls seemed to have exploded inside the cannon, rendering it useless.”