Story of Iranian woman with no arms gets global media attention 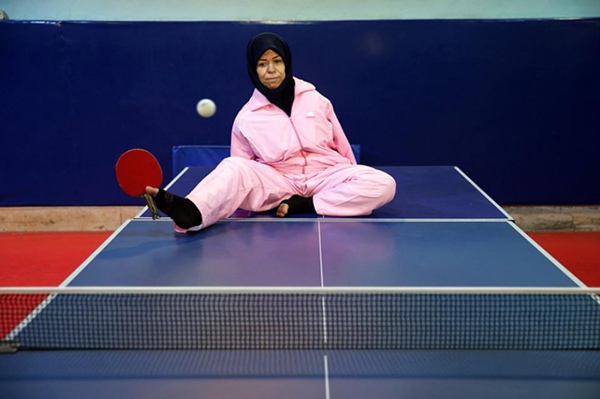 “Each body might have some limitations and deficiencies. But if you have a pure, elevated soul I think the body won't matter,” said the disabled Iranian woman.

The Associated Press has filed a report on Zohreh Etezadossaltaneh who was born without arms, but that hasn’t stopped her from excelling in many activities, ranging from painting to table tennis.

Now 52 years old, the retired Iranian teacher has dedicated herself to helping others with similar disabilities live full and satisfying lives.

Her story is one of personal triumph and indomitable spirit.

“Each body might have some limitations and deficiencies. But if you have a pure, elevated soul I think the body won’t matter,” she said.

After receiving her primary education at a special school for disabled children, Etezadossaltaneh moved into the mainstream Iranian education system and eventually earned a degree in psychology.

Now she works with young people with similar disabilities. Among her students is 9-year-old Roohollah Jafar, who lost his hands in an accident and is now learning from Etezadossaltaneh to paint and do calligraphy using his feet.

At the start of their lesson, Etezadossaltaneh skillfully massages the boy’s feet with her own feet and guides him on how to hold and control a pen between his toes.

Etezadossaltaneh’s feet have become dexterous enough to hold a ping pong paddle or a paint brush. She has staged multiple exhibitions and supplements her retirement pension by selling some of her artwork.

“She works so easily that I’ve totally forgotten she paints with her feet,” said her painting instructor, Parisa Samavatian.

Etezadossaltaneh’s skill at table tennis has led to her being featured in public exhibition matches. But she insists that she wants to be more than just a symbolic figure of inspiration.

“I want to play seriously and get a name,” she said. “I want to represent my country in competitions overseas.”

The following is a photo gallery of her posted online by fararu.com: