Spokesman: EU’s Mogherini Due in Iran on Saturday 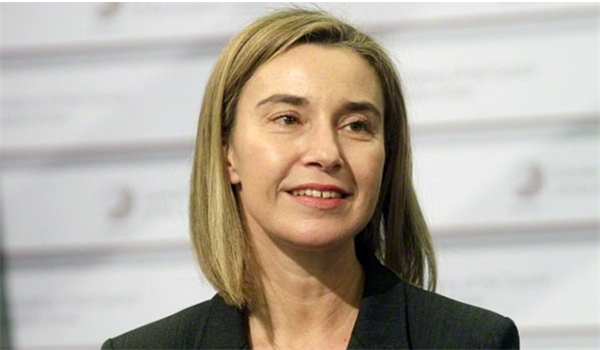 “Ms. Mogherini is due to visit Iran on Saturday April 16 along with a big delegation of EU Commission members,” Foreign Ministry Spokesman Hossein Jaberi Ansari told reporters in his weekly press conference in Tehran on Monday.

“Serious talks will be held between the EU and Iran on political issues and in other fields,” he added.

Stressing the importance of Mogherini’s visit, Jaberi Ansari said, “We are in a new state of relations with the EU after the nuclear deal (between Tehran and the world powers clinched last July).”

Addressing a press conference in Brussels in March, Mogherini had announced her visit to Iran, adding that she would be accompanied by a delegation of European Commission members for discussion on bilateral EU-Iran relations, which have new perspectives in sight following the removal of sanctions on Tehran.

The EU foreign policy chief said she will discuss bilateral ties and regional developments during her upcoming visit to Iran.

In August 2015, Tehran and the six world powers reached a historic deal on Iranian nuclear program, which was set to ensure the peaceful nature of its nuclear program in exchange for the termination of anti-Iran sanctions.

In mid-January, the sanctions were removed after the International Atomic Energy Agency (IAEA) verified Tehran’s compliance with the nuclear agreement. The move makes it possible for Iran to develop relations in different spheres with the European Union.