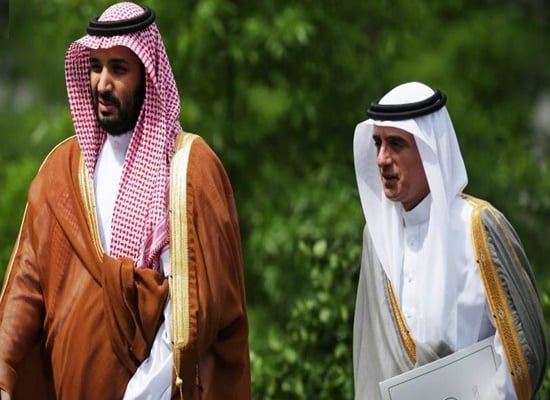 Iranian Foreign Ministry Spokesman Bahram Qassemi says the current rulers of Saudi Arabia have turned themselves into symbols of aggression and crime in the Middle East.

In a Wednesday statement, Qassemi vehemently slammed the recent anti-Iran remarks made by Saudi Crown Prince Mohammed Bin Salman and Foreign Minister Adel al-Jubeir during their visit to France.

He said the Saudi rulers have put their names and that of their country in the list of the region’s criminals and aggressors along with violent dictators like Saddam Hussein.

“These people should know that by levelling baseless accusations against Iran and harbouring their delusions about the country, they cannot close their eyes to this reality that all regional states and nations as well as close observers of the regional and international developments are fully aware of Saudi Arabia’s role in creating, sponsoring and arming the terrorist and violent groups like ISIS in the region,” he noted.

The spokesman underlined that Saudi Arabia’s role in the countless crimes and humanitarian catastrophes in some neighbouring states, region and the whole world would not be forgotten.

Qassemi went on to say that today, Saudi Arabia is in dire need to have a periodical face change to erase its dark record over the recent years.

“Under various pretexts, demands and foreign or domestic pressure, Saudi Arabia presses ahead with its policy to purchase security and weapons, justifies its failed or defeated projects in war on Yemen and forms an alignment with the occupying regime of Israel as one of the main regional criminals and destabilisers.”

The spokesman underlined that due to their desperate and unavoidable conditions, the Saudi rulers are seeking to ease their plight, remain further in power, seize more control and suppress their opposition by spending billions of dollars.

“The Saudi rulers who hope to buy the support of some extra-regional states should take a fresh prudent look at the relatively recent history of the region and take lessons from the fate of their former friend and ally, Saddam,” he added.

Qassemi said the Saudis should have this point in mind that they cannot change their doomed fate by playing the blame game, buying security and sponsoring terrorist groups.

The spokesman then said the current rulers of Saudi Arabia have turned themselves into the icons of violence and crimes in the Middle East along with the Zionist regime by further meddling in the internal affairs of the regional states, contributing to the regional destabilisation and problems.

“Some of the former and current Saudi officials have created crises, tensions, destabilisation and relentless and long-time wars in Western Asia through their wrong decisions and choices, unconsidered policies including unconditional support for Saddam and creating, leading and sponsoring Al-Qeada, ISIS and other terrorist groups and waging war on Yemen and now making fresh attempts to build an alliance with the Zionist regime,” he said.

Qassemi finally called on the French officials to remind the Saudi rulers of the fate of former aggressors and dictators during their bilateral talks.

Saudi crown prince made a two-day visit to France as part of his global image-building tour. During a Tuesday press conference in Paris, Bin Salman and French President Emmanuel Macron agreed to curb what they called Iran’s “expansionism” in the region.