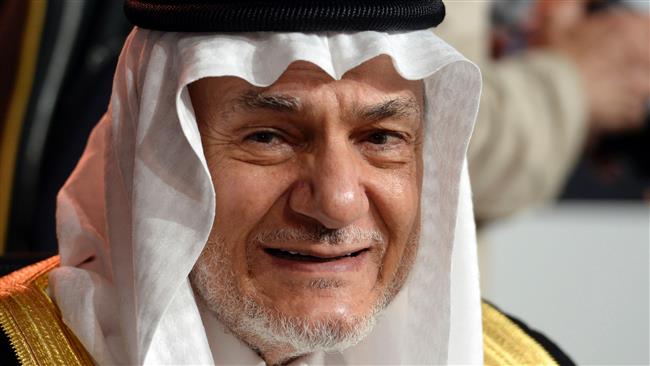 Saudi Arabia’s former spy chief has attended an annual meeting of a terrorist group highly detested in Iran, raising the stakes in the kingdom's confrontational approach toward the Islamic Republic.

Prince Turki al-Faisal’s appearance and his nearly 30-minute address to the gathering of the Mujahedin-e Khalq Organization (MKO) in Paris on Saturday go in line with Riyadh’s long history of supporting Takfiri terrorists.

The MKO is the most hated terrorist group among the Iranians because of its dark history of assassinations and bombings and for siding with the former Iraqi dictator Saddam Hussein in his eight-year war against Iran in the 1980s.

Faisal’s overt pronouncement of support for the terrorist group marks a turning point in Saudi Arabia’s hostility toward Iran and the kingdom’s lack of concern about the sensitivities of the Iranians.

Under the new Saudi rulers, Riyadh has adopted an aggressive policy toward Iran and its allies which are fighting a menacing Takfiri militancy in Iraq, Syria and elsewhere.

Takfirism, which is the trademark of many terrorist groups operating in the region, is largely influenced by Wahhabism, the radical ideology dominating Saudi Arabia and freely preached by Saudi clerics.

In 2002, Prince Turki was named in a multibillion-dollar lawsuit by the families of September 11 victims. A court affidavit filed in 2015 claimed that convicted al-Qaeda plotter Zacarias Moussaoui served as a courier between bin Laden and Faisal.

Saudi Arabia is widely believed to have been providing funds and weapons to militants fighting to topple the Syrian and Iraqi governments.

Under the pretext of fighting Iranian influence, the kingdom has also been waging a destructive war on Yemen which has claimed thousands of innocent lives so far.

Faisal’s participation in the MKO gathering and his unequivocal proclamations of support for a group which is internationally listed as a terrorist organization takes the kingdom’s irresponsible policies and its insolent attitude toward diplomatic norms to a new height.

Reacting to the development, an official at the Iranian Foreign Ministry said the kingdom is using terrorists as “a tool to advance its objectives against Muslim countries.”

“It was not unlikely from the godfather of Taliban and al-Qaeda as well as the partner of the Zionists to show their desperation with a new instance of obscenity and political idiocy through participation at the gathering of bankrupt mercenary terrorists,” the official said.

“The desperation of the Saudis and their resort to registered terrorists in this showdown indicates that for them, as they have shown in Iraq, Syria and Yemen, terrorism and terrorists are a tool to advance their objectives against Muslim countries in the region,” he added.

In his speech, Faisal pledged to stand by the MKO in what he described as the terrorist outfit’s efforts against the Iranian establishment.

Faisal, who currently chairs the Board of the King Faisal Centre for Research and Islamic Studies, also made outrageous remarks against Iran’s revolutionary leaders.

He described MKO terrorists as a hope for “freeing Iran of oppression.”

The terrorist group, which has built a cult-like following, is known for brutal elimination of its own members over dissent. It also keeps tight tabs on social media where Internet and cell-phones are non-existent among its inner circles.

Saudi Arabia, meanwhile, has a dismal record for human rights abuses where dissent is not tolerated. Shia Muslims are a regular target of crackdown and discrimination and women’s rights in the kingdom are among the most restricted in the world.

In his speech, the Saudi prince referred to the notorious terror group’s current head Maryam Rajavi, who was in the audience, as “Mrs. Maryam Rajavi and your late husband Massoud Rajavi.”

The former MKO leader has made no public appearance since 2003, raising speculations that he might be dead even though the terrorist outfit does not confirm that.

The MKO has carried out numerous terrorist attacks against Iranian civilians and government officials over the past three decades. Out of the nearly 17,000 Iranians killed in terrorist attacks since the victory of Iran’s Islamic Revolution, about 12,000 have fallen victim to MKO’s acts of terror.

Washington and the European Union have removed the MKO from their list of terrorist organizations and the group currently enjoys freedom of movement and activity in the US and Europe, including regular meetings with American and European politicians.