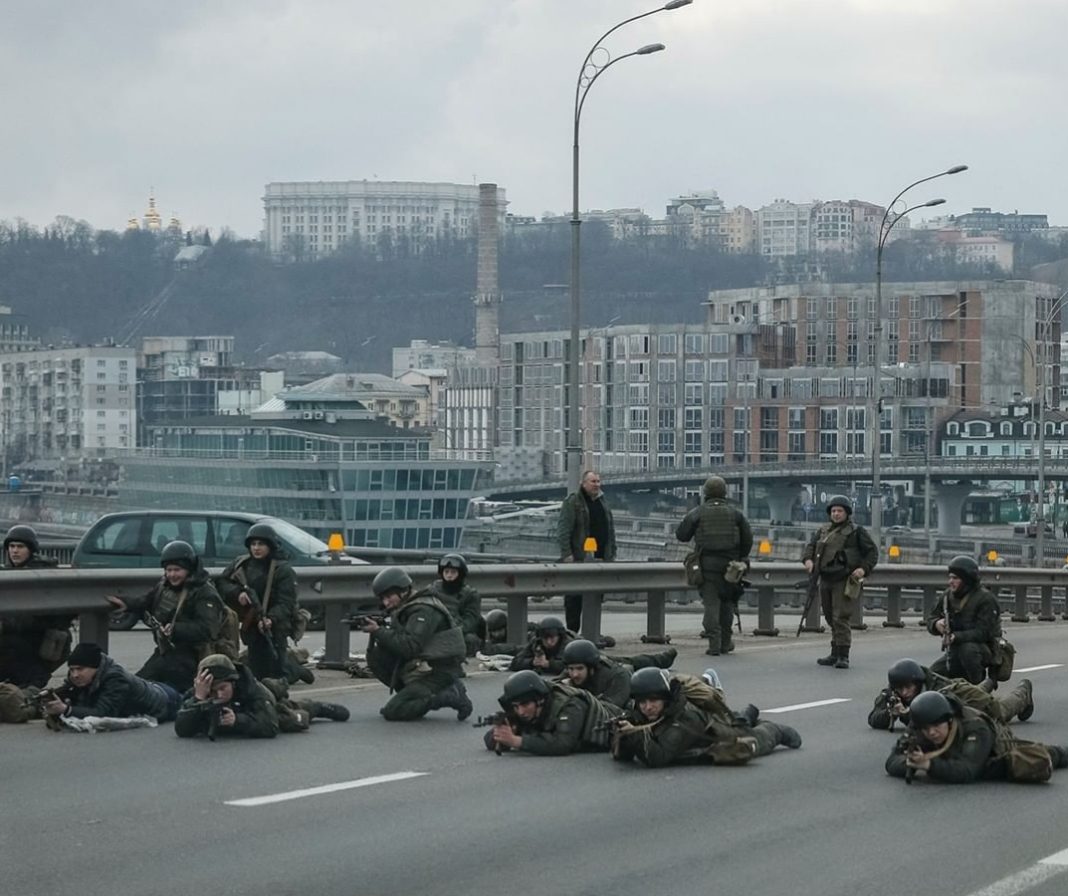 Two days into the Russian invasion of Ukraine, fighting has reached the outskirts of Kyiv, following a night of missile attacks on the European country’s capital.

Heavy gunfire and explosions could be heard in a residential district of the capital on Friday and Ukrainian officials have warned that Russian military vehicles are approaching the city.

The Ukrainian Defence Ministry announced Russian forces had entered the Obolon district of Kyiv, about six miles from the centre of the city.

In a statement posted online, it advised residents to report the movements of Russian troops and to “prepare molotov cocktails in order to neutralise the enemy”.

The Ukrainian military also added that Russian spies and saboteurs had been spotted within the city, some 5 kilometers (3 miles) from the city center.

“They say that civilian objects are not a target for them. It is a lie; they do not distinguish in which areas to operate,” he stated.

Zelenskiy made the claim in a televised address early on Friday, in which he vowed to continue to defend his country.

“Russia will have to talk to us sooner or later about how to end hostilities and stop this invasion. The sooner the conversation begins, the smaller Russia’s losses will be,” he added.

The president, who also criticised world leaders for “watching from afar”, spoke after large explosions were heard in the capital, and after a warning from U.S. Secretary of State, Antony Blinken, that “all evidence suggests that Russia intends to encircle and threaten” the city.

Zelenskiy has vowed to stay in the capital.

The UK Defence Secretary, Ben Wallace, has said it is the view of British intelligence that Russia intends to invade the whole of Ukraine, but its army failed to deliver on the first day of its invasion.

The international criminal court (ICC) announced on Friday it might investigate possible war crimes, though did not provide any further details.

Thousands of people have taken shelter in metro stations throughout the Ukrainian capital amid Russia’s assault.

Al Jazeera’s Andrew Simmons, reporting from Kyiv, said the situation there is rapidly “escalating in every respect”.

“That is not just in the air but on the ground as well – there are armoured [Russian] columns heading towards the city,” he continued, adding, “There is real anger in the air … and the hatred for Putin is palpable.”

“Furthermore, there are a number of places in the city where people can get a gun of their choice, particularly an AK47, to defend themselves and that is the policy of the presidency. Zelenskyy wants everyone to fight,” he noted.

“What we are going to find is that when these Russian forces reach the capital there is likely to be fierce resistance. The overall mood is one of horrendous fear of what’s going to happen next,” he stated.

Russia launched a full-scale invasion of Ukraine that opened with air and missile strikes on Ukrainian military facilities before troops and tanks rolled across the borders from the north, east and south.

The Ukrainian military fought back on multiple fronts.

As many Ukrainians piled into trains and cars to flee the fighting, the U.S. and European leaders rushed to punish Russia with strong financial sanctions. NATO moved to strengthen its eastern flank.