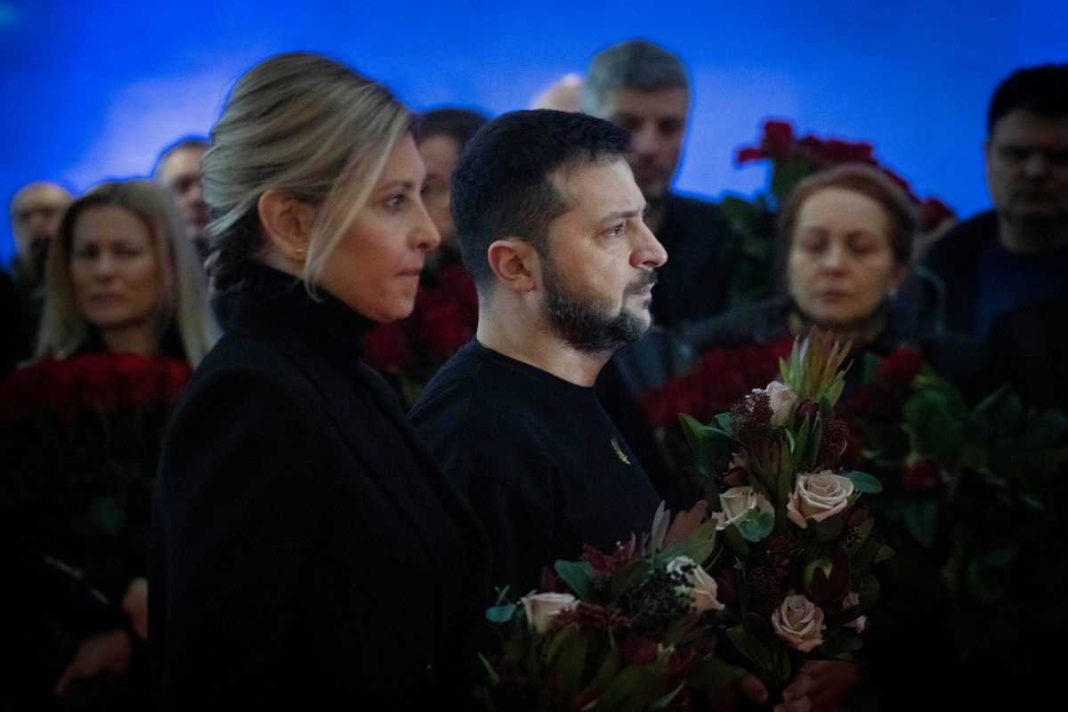 France and Germany to back Ukraine ‘as long as necessary’: Chancellor

German Chancellor Olaf Scholz noted Germany and France will support Ukraine for “as long as necessary” in its fight against Russia.

“We will continue to provide Ukraine with all the support its needs for as long as necessary. Together, as Europeans, to defend our European peace project,” he stated in a speech at the Sorbonne University to celebrate 60 years of postwar Franco-German cooperation.

Britain pushing for German-made tanks to be provided to Ukraine

James Cleverly, the UK Foreign Secretary, has been speaking this morning on the prospect of German made tanks being provided to Ukraine.

Speaking to Sky News, he said: “Of course, I would like to see the Ukrainians equipped with things like the Leopard 2 as well as the artillery systems that have been provided by us and by others.”

“I will keep having those conversations with our NATO allies and friends, to facilitate the donation of the best military equipment to Ukraine to help them defend themselves against this brutal invasion,” the diplomat added.

Germany has been criticised for not providing enough support to Ukraine, but Cleverly stopped short of criticising the country, saying each nation would provide support “in a way that is most appropriate to them”.

A key Vladimir Putin ally has warned that Moscow could retaliate if Nato-provided weapons are used to hit Russian territories.

Vyacheslav Volodin, speaker of the Duma, said: “If Washington and NATO countries supply weapons that will be used to strike civilian cities and attempt to seize our territories, as they threaten, this will lead to retaliatory measures using more powerful weapons.

“Arguments that the nuclear powers have not previously used weapons of mass destruction in local conflicts are untenable. Because these states did not face a situation where there was a threat to the security of their citizens and the territorial integrity of the country,” he added.

Russian army to grow by a further 11%

UK intelligence officials posted an update on Twitter in which they detailed an announcement by the Russian Defence Minister for plans to grow the military to 1.5 million personnel by 2026.

This would represent an 11% increase on its current size. UK officials said this is a signal that Russia believes an enhanced military threat will persist beyond the end of the current conflict.

But, the MOD announced, “However, Russia will highly likely struggle to staff and equip the planned expansion.”

The news comes after reports that Moscow could be readying itself to recruit a further 500,000 conscripts.

The Ukrainian military says Russian forces continue their assaults on Bakhmut and Avdiivka in Donetsk, two towns that have been shelled persistently since last summer but remain in Ukrainian hands.

The General Staff said Sunday that the Russians “conducted unsuccessful offensives in the Avdiivka and Lyman direction. They continue to attempt an offensive in the Bakhmut direction, increasing the intensity of their use of aircraft. In other directions — they are on the defensive.”

It added that Ukrainian units had repelled attacks in both Luhansk and Donetsk regions, identifying nearly a dozen settlements. One was the village of Novoselivske inside Luhansk, indicating that the Ukrainians have consolidated their control of that district.

There had also been shelling of settlements in the Kharkiv region that were liberated in September.

The General Staff announced Ukrainian missile and artillery units had struck two areas of Russian troop concentrations, without specifying where.

Zelensky made the remarks in an address to participants at the Conference of Agriculture Ministers in Berlin.

“Right now, while the discussions at this forum are going on, more than 100 ships transporting food are lined up near the Bosphorus (Strait in Turkey). Why? Because they need to be inspected, and Russian representatives are blocking this inspection,” noted Zelensky, speaking in English at the conference. “The ships are detained for weeks.”

“It means higher prices for Europe. For Asia, it means a growing threat of social instability. In Africa, for such countries as Ethiopia or Sudan, it means empty tables for thousands and thousands of families,” Zelensky continued.

He added “the world needs more determination and more cooperation to stop the aggression that ruins the food market” and “to stop any state that blocks the sea and destroys food-supply chains, to bring to justice any tyrant who tries to make famine an instrument of political influence.”

The Ukrainian president stated before the Russian invasion of Ukraine in February 2022, Ukraine “exported six and a half million tonnes of food every month.”

But now the shipments have been cut in half, due to what he said was Russian aggression and actions to block Ukraine’s food exports.

Zelensky called on participants of the Conference of Agriculture Ministers to join the “Grain from Ukraine” initiative, as well as to create food hubs in Africa. He invited them to Kyiv “to make concrete arrangements.”

The foreign ministers of Estonia, Lithuania and Latvia on Saturday jointly called on Germany to immediately provide Ukraine with Leopard tanks, Estonian Foreign Minister Urmas Reinsalu said in a tweet.

“Germany as the leading European power has special responsibility in this regard,” Reinsalu said.

Ukraine’s Deputy Foreign Minister Andriy Melnyk expressed his frustrations Friday that Germany has yet to decide whether or not to send its Leopard tanks to Ukraine.

Speaking to CNN’s Isa Soares on Friday, Melnyk called Germany’s indecisiveness a “disappointment” after first praising the UK for moving forward with a pledge of Challenger 2 tanks, adding he hoped the move might trigger other countries to follow suit.

Germany has so far failed to reach an agreement with its key Western allies on sending Leopard 2 tanks to Ukraine, despite growing pressure from NATO and Kyiv to step up its military aid ahead of a potential Russian spring offensive.

Newly appointed German Defence Minister Boris Pistorius told reporters on the sidelines of a high-stakes defense meeting at Ramstein Air Base in Germany on Friday that no decision has been made yet regarding sending Leopard tanks to Ukraine.

Countries in possession of those tanks need export permission from Germany.

Russian forces are attempting an offensive in the southern Zaporizhzhia region, while also trying to push forward in parts of Donetsk in the east, the Ukrainian military reported.

The Russian military “conducted unsuccessful offensives in the Avdiivka sector (in Donetsk). It continues to attempt an offensive in the Bakhmut and Zaporizhzhia directions, increasing the intensity of aviation use,” the General Staff of the Armed Forces of Ukraine said Saturday in a statement.

The General Staff stated there had also been cross-border shelling by the Russians in the northeastern Sumy and Kharkiv regions.

It also added the Russian-appointed administration in occupied Kherson “is tightening control over the registration of civilians” in the southern region.

“In particular, it is trying to create a database of civilians’ places of residence, threatening to cut off electricity under the guise of implementing an ‘electricity saving program,'” the statement reads.

Earlier Saturday, the Russian Defense Ministry claimed several villages near the city of Orikhiv in Zaporizhzhia had been won. Ukraine has not responded to the claim, but said that “in the Zaporizhzhia sector, artillery fire hit areas near more than 25 settlements.”

There have been reports of heavy fighting around Bakhmut, which Russian officials claim is slowly being encircled, and further east around Kreminna in Luhansk, where Russian forces are seeking to prevent any Ukrainian advance through a nearby forested area. Ukrainian success in this area could compromise Russia’s supply lines towards Bakhmut.

The head of the Russian private military contractor Wagner has published a short letter to the White House asking what crime his company was accused of, after Washington announced new sanctions on the group.

White House national security spokesperson John Kirby stated that Wagner, which has been supporting Russian forces in their invasion of Ukraine and claiming credit for battlefield advances, would be designated a significant Transnational Criminal Organization.

A letter in English addressed to Kirby and posted on the Telegram channel of Wagner founder Yevgeny Prigozhin’s press service read: “Dear Mr Kirby, Could you please clarify what crime was committed by PMC Wagner?”

The Russian defence ministry has announced it held a training exercise on repelling air attacks in the Moscow region.

“In the Moscow region, a training session was held with the personnel of the anti-aircraft missile brigade of the Western Military District on repelling air attacks on important military, industrial and administrative facilities,” the ministry said in a statement.

It added an S-300 anti-aircraft missile system was involved in the training as combat was simulated.

“As they marched, soldiers repelled an attack by a mock enemy sabotage group on a military convoy,” the statement read.